(Note: images can be clicked on for a larger view)

Excitement has been building for a number of days (weeks, for the ensemble users) now regarding the potential for some snowfall early this upcoming week. Although models have trended slightly warmer for this event over the past several days, it looks like we still have a situation that is marginally supportive of snowflakes reaching the valley floor sometime during this period. Given the time of year, I would expect that seeing this happen between 10am-6pm is unlikely, but I can't rule it out.

It looks like the first chance for snow to occur would be Sunday night, when 700mb temperatures fall below -7.5 C and a brief surge of moisture pushes through. Given the initial airmass saturation and cooling that will have to occur, I'm not too excited about that one.

The second chance arrives Monday evening and overnight into Tuesday morning. During this timeframe, the GFS is showing temperatures right around -8 C as a new surge of moisture pushes overhead (shown below). Given the nearly westerly flow regime, the lifting of this airmass as it encounters the mountains should be dramatic. This looks like a really good opportunity for snow above 5000 feet with some heavy bursts at higher elevations. However, the situation in the valley may be different, as the model sounding shows a decent melting layer at the surface. 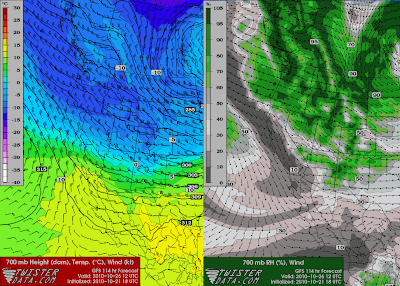 The third and final chance is currently forecast to be Tuesday evening and overnight. This occurs as 700mb temperatures plunge to near -10 C, but the better RH fields move off to the east (shown below). Also during this time, model soundings indicate a very thin melting layer at the surface, which would allow flakes to more easily reach the valley floor (below as well). One final scenario is that the best combination of good moisture and low enough temperatures occurs Tuesday afternoon, but has trouble battling the diurnal cycle. 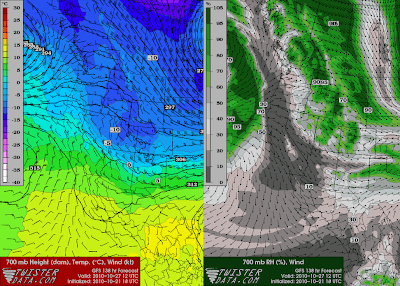 Hopefully, the models will soon converge on a solution as to the best time frame for the occurrence of any snowfall.
By JonR Posted at 10/21/2010 09:08:00 PM