Radar imagery has been fairly quiet the past couple of hours. The latest shows some areas of orographic precipitation from Little Cottonwood to the UT-ID border. 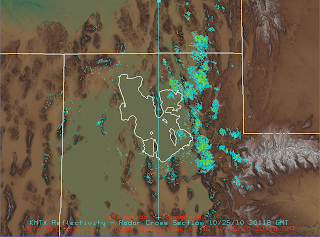 We've opted to move forward with the optional 2100 UTC sounding for a couple of reasons.  The first is that the flows at the north end remain bizarre.  Note the southerly flow at Locomotive Springs. 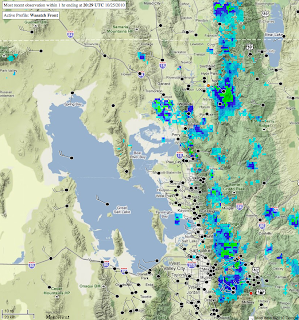 I've seen this before in lake-effect events and its always been a head scratcher.  Trevor's model runs and observations thusfar today suggests perhaps some sort of wake effects in the lee of the Raft River range.  A single sounding ob might make this hard to nail down, but perhaps it will help.

The second is that we are starting to see an increase in cumulus convection over the lake.  In fact, todays visible satellite loop is really incredible.  Despite the persistent northwesterly flow at upper-levels, once cal clearly see what appear to be retrogressing mountain waves in the loop.


It appears, however, that the waves are becoming increasingly progressive in the last hour or two.  We'll see if this leads to anything or if the lake stays shut down as it often does in the afternoon.  The flow is so strong right now that I wonder if the thermally driven flows can even get going.
By Jim S Posted at 10/25/2010 02:38:00 PM