Our tour of selected Innsbruck-area resorts is now nearly complete after we spent a few hours skiing at Kuhtai this morning.

Kuhtai is west of Innsbruck and sits in a high pass between the Nedertal (Neder Valley) to the west and the Sellraintal (Sellrain) valley to the east.  The base elevation of just over 2000 meters (about 7000 feet) is the highest in Austria, although the lift-served vertical is only 500 meters, which is pretty small by Austrian standards.  Abundant options for ski touring exist throughout the region, with some tours highlighted with icons below.  In fact, our tour last week of the 3000 meter Zweiselbacher Rosskogel followed a route in the prominent valley between Kuhtai and Sankt Sigmund in Sellrain. 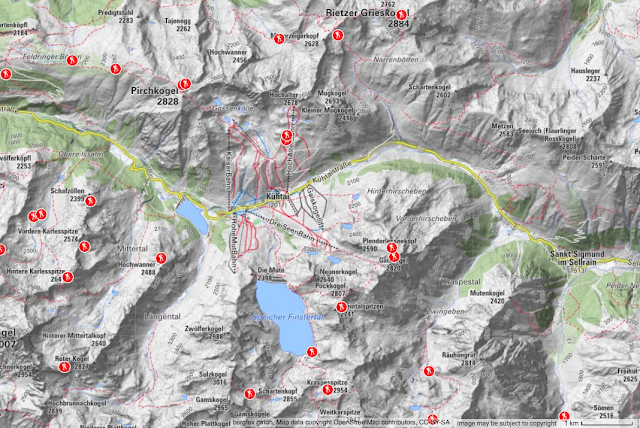 At the base of the resort sits a small village consisting of a couple of clusters of hotels, evident on the right hand side of the photo below, which is taken looking toward the north or northwest.  Click and enlarge and you can probably make out some of the lifts and trails on the south facing slopes above the village.  These are the longer runs at the resort.

The lift served terrain is a bit like what you would get if you took an iron to upper Little Cottonwood, flattened it out some, and removed some trees.  Basically lots of intermediate terrain with a few steeper off-piste pitches.  The view toward the south is stunning, consisting of many peaks near or just above 3000 meters.  The lift served terrain does not extend into these peaks, but goes to about 2400 meters, leaving abundant options for ski tourers at upper elevations.

The last snow was a few days ago and it has been warm, but the north aspects are preserving powder and there was still room for turns in the mountains above the resort. 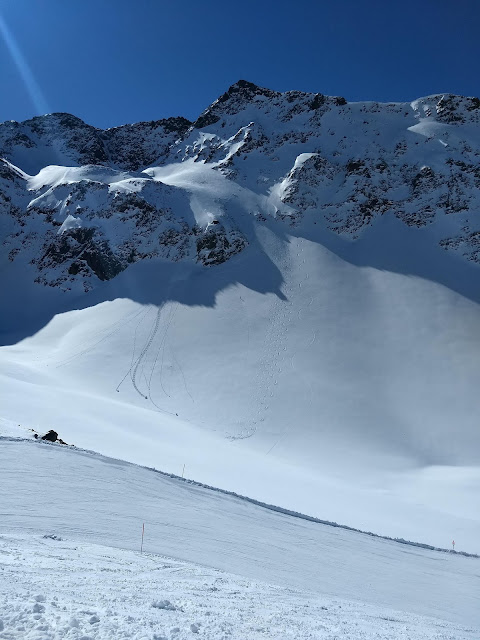 With south facing and north facing lift-served terrain and mild weather, we worked the aspects.  The north facing terrain this morning was smooth and carveable and skied well.  At about 10:30, we hopped over to the south side as it softened and before it turned to mush.  We then returned to the north side for a few more laps before getting the bus back to Innsbruck to get some work done.

The importance of the sun for snow hydrology is very apparent in the Alps right now.  The photo below, taken looking eastward down the Sellraintal, shows how the south aspects have been baked and are down to bare ground in areas where the snowpack was thin, even at elevations above 2000 meters. 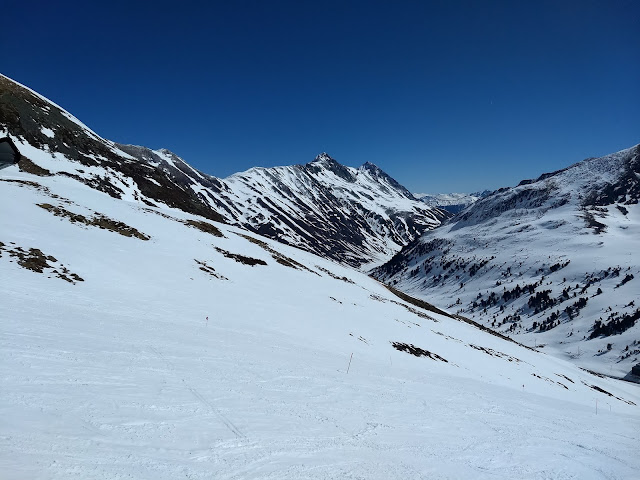 In contrast, the snowpack on the north aspects isn't even ripe yet (i.e., warmed up through depth to 0˚C) and is still sheltering dry powder at upper elevations.  Ski tourers today could ski settled powder and corn if they played their aspects and timing right.

We have only one Innsbruck area resort left to ski on our list, Nordkette, which is right above our apartment.  Hopefully soon.  We can probably do it for a long lunch break some day.
By Jim S Posted at 3/29/2019 08:52:00 AM