State of the Snow – Alpine Style

Historically, this blog has presented occasional updates of the snowpack in the western U.S. and Wasatch Mountains from time to time during the cool season, but given that I am currently living in Innsbruck, this season we will focus on the Tirol instead.

The Tirol has had a feast or famine winter, with huge snow accumulations in late December and early January and then relatively dry and eventually warm weather from mid January through February.  We could look at scientific reasons for this transition, but as most readers of this blog are aware, it almost surely reflects the "Steenburgh effect" or, perhaps alternatively, the Steenburgh curse.  Wherever I go, drought seems to follow.

When we arrived in mid January, the Tirol was a winter wonderland, especially the northern Alps.  The skiing was good, but it has deteriorated.  That deterioration accelerated over the last week or two due to extreme warmth, sun, and yesterday, rain below about 1600 meters.

With widespread cloud cover this morning, it made the most sense to simply go for a ski tour up one of the nearby resorts and get some work done in the afternoon.  I arrived at the base of the Patscherkofel (1000 meters) to find a snowpack that was tired, ripe, and wet. 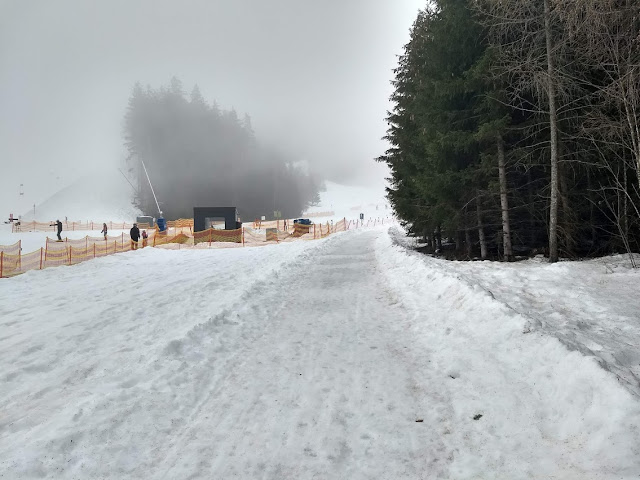 Mother Nature had indeed done severe damage.  This is consistent with snow depth (not to be confused with water content) observations from Leutasch (1135 m) on the Seefeld plateau just across the Inn Valley to the northwest.  Snow depth peaked in early January, settled, was replenished in early February, but then has dropped steadily from 140 to 85 cm.  Although well above average, it's now near average.

Sun exposed areas have taken a beating.  There hasn't been snow in Innsbruck for a while and I've been getting heartburn watching the snow line creep up the south-facing slopes of the Nordkette. Below are some bare spots along the Patscherkofel ski runs in an area that does get some afternoon sun. 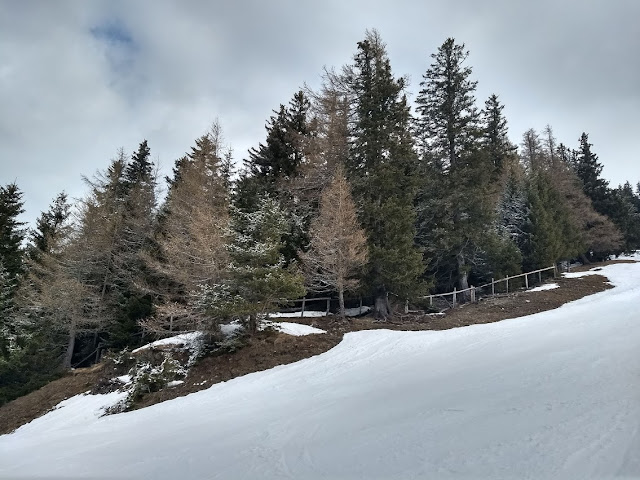 Of course, one advantage in the Alps is that there is huge relief.  Above perhaps 2000 meters, the damage has been less severe.  At 2837 meters at Pitztaler Glescher ski area southwest of Innsbruck and near the Alpine divide, snow depth hasn't suffered too much.

Skiing at such altitudes, however, would have been difficult today due to the widespread cloud cover. 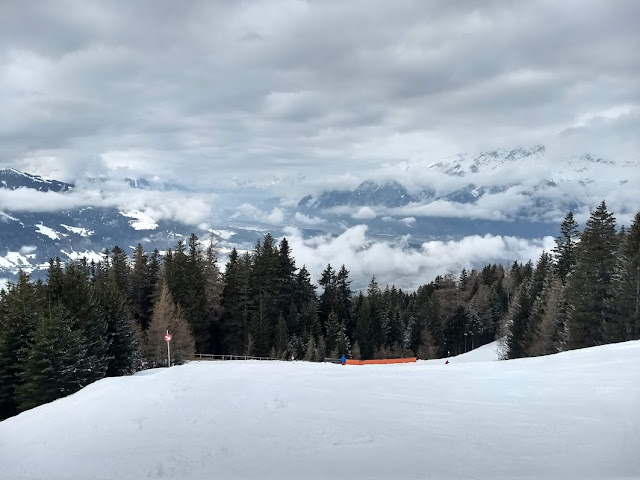 Italy was clearer, but that was a bigger trip than I wanted to do.

This is all an example that Mother Nature giveth and Mother Nature taketh away.  Hoping the model-advertised pattern shift, which suggests a breakdown of the block, will lead to improvement in the coming days.
By Jim S Posted at 3/02/2019 07:57:00 AM