A Weekend in Obergurgl

This weekend we really scored in a number of ways.  Mother Nature blessed us with much needed snow on Friday.  She then provided clear skies for the weekend.  Finally, we got lucky and landed two nights at the University of Innsbruck's Obergurgl Conference Center in Obergurgl, which offers slopeside accommodations at a (somewhat) affordable price.

Obergurgl is located in the very upper reaches of the Ötztal (Ötz Valley), which is the longest valley that connects to the Inn Valley.  It's most famous ski area is probably Sölden.  Obergurgl and nearby Hochgurgl, which are connected by lifts sit at higher altitude (each near 2000 meters). 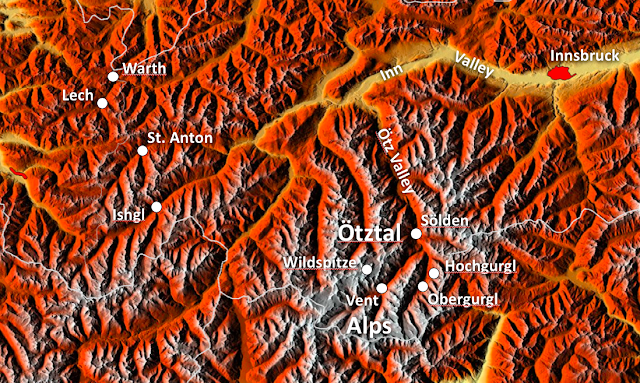 The surrounding Ötztal Alps represent one of the highest mountain regions of Austria, with numerous peaks exceeding 3000 meters, including the Wildspitze, Austria's second highest peak at 3770 meters.  As can be seen in the pictures further down in this post, it is a spectacular area, with deep valleys and big vertical.  Sölden, for example, has a lift served vertical drop of nearly 2000 vertical meters (6500 feet).

What the Ötztal Alps don't have is much powder.  Mean annual precipitation (inches) is pretty low in the Ötztal as they are buried deep in the heart of the Alps and most storms drop their load on lower terrain to the north and the south.  In fact, there is a dramatic decline in mean-annual precipitation and cool-season snowfall as you move from the Arlberg region in northwestern Austria, including Warth, Lech, and St. Anton, to the Ötztal, a fact that our bartender lamented yesterday evening when I was talking with him about the regional meteorology (never underestimate the meteorological knowledge of a ski-touring bartender).

Nevertheless, there were three things that attracted me to the area.  The first was beauty.  The second was the University Conference Center.  The third was the lack of a nightlife.  A beer or two with dinner and I'm good.

Obergurgl and Hochgurgl are two interconnected ski areas that are smaller and quieter than nearby Sölden and perhaps rate as medium sized Austrian ski areas.  Collectively they have 22 lifts, 110 km of pistes, and a 1289 meter (4230) foot vertical drop.  The lowest point is at 1793 meters and Obergurgl and Hochgurgl are at 1930 and 2150 meters, respectively, which is high by Austrian standards.  They are interconnected by a long, quasi-horizontal gondola that traverses a few deep valleys that would present a challenge for piste-type ski terrain. 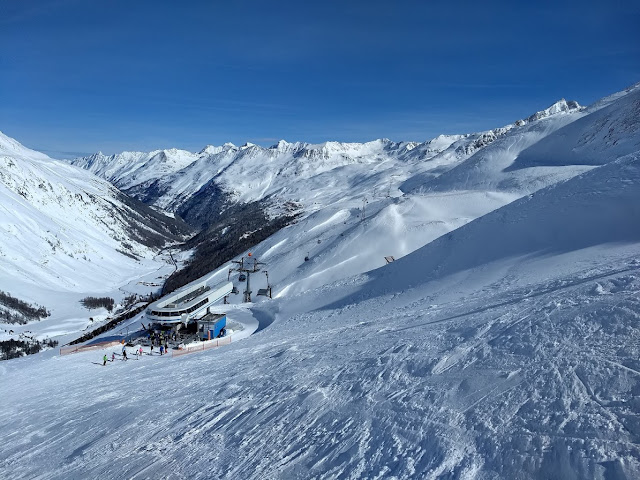 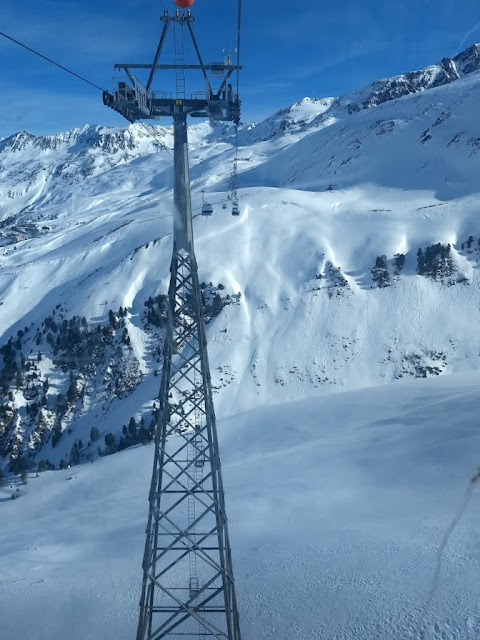 The two villages are modest in size, but contain some large guesthouses (Top: Hochgurgl, Bottom: Obergurgl from the University Conference Center). 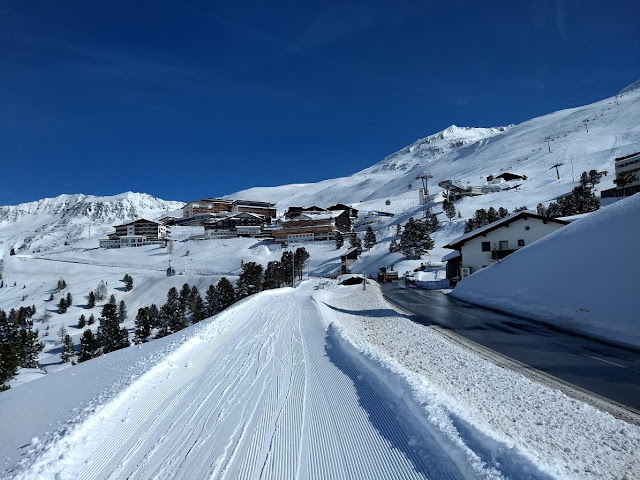 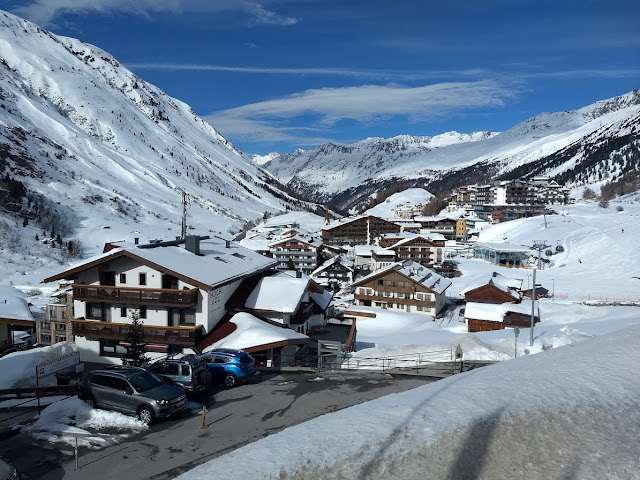 The ski areas have an abundance of intermediate terrain, with some steeper off piste skiing in some areas.  I found them to be a nice place to ski for a couple of sunny days.  The photos below provide some perspective. 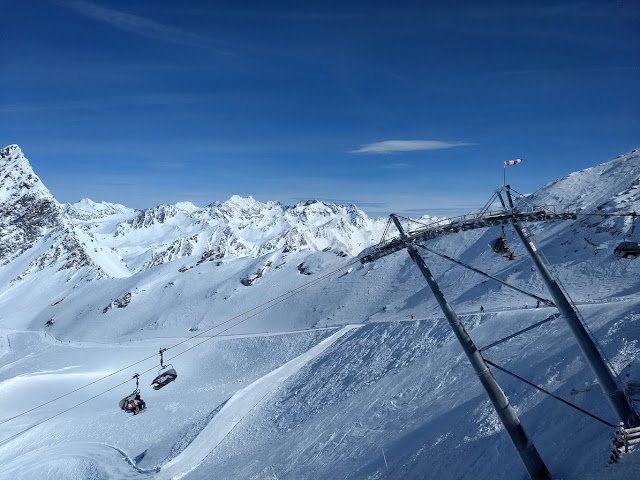 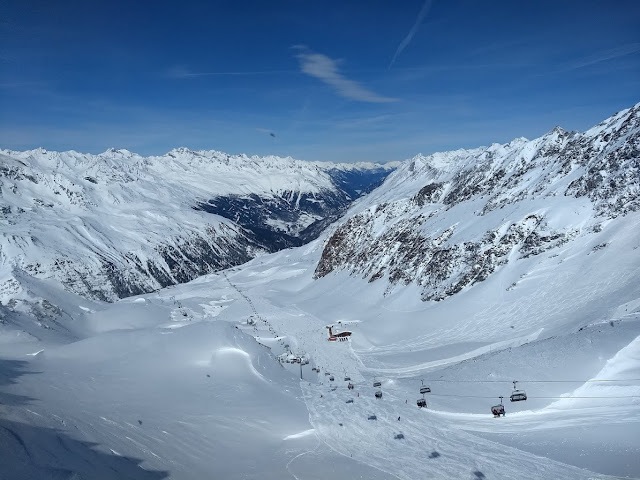 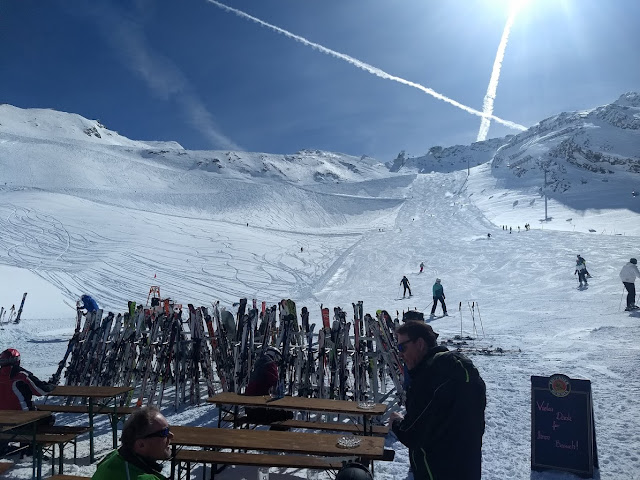 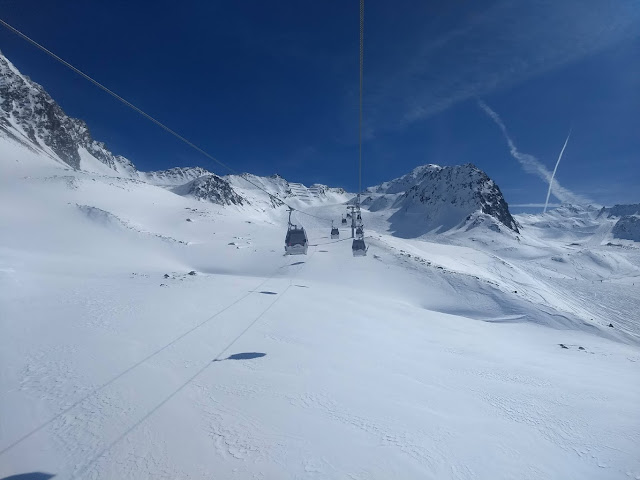 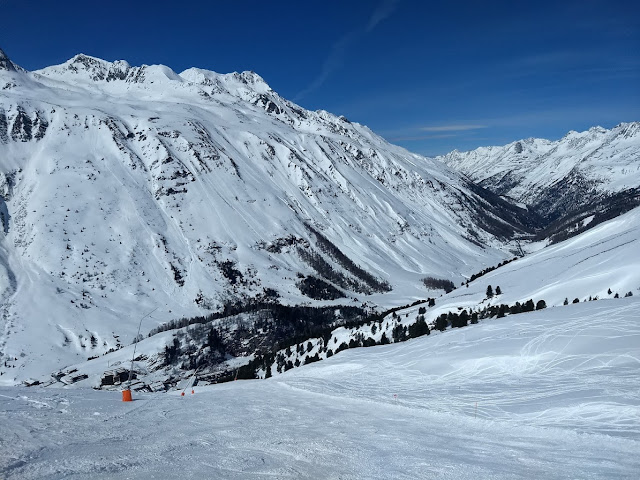 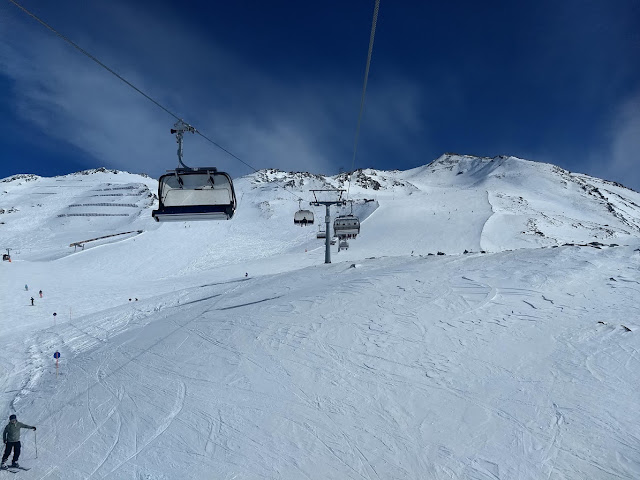 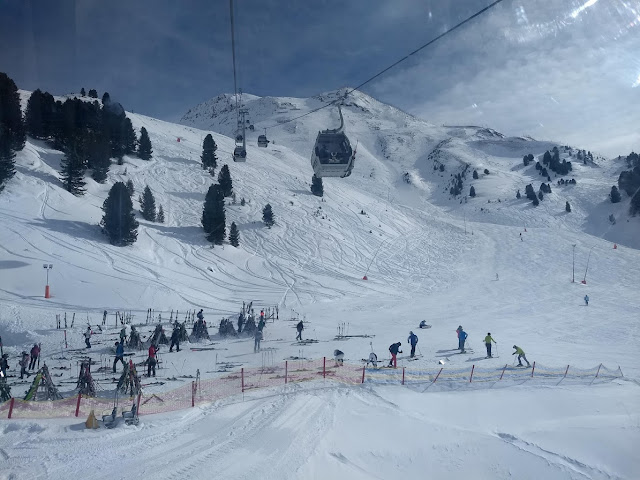 The Obergurgl side has a bit more pitch, but Hochgurgl the longer runs.  It is possible to ski the full vertical on the Hochgurgl side, which I did once non-stop.  4000+ vertical feet is a long run anywhere, but it's not as difficult to manage as at Jackson Hole.  Mother Nature brought fresh snow on Friday and we arrived in a snowstorm.  Avalanche danger was high on Saturday, so I only did some nibbling in lower-angle off-piste terrain, but it was a warm storm and with a bit of wind, the snow was stiff and not great.

I mentioned views.  On a clear day, your mouth is agape continuously.  We had a run right after opening on Sunday morning at the easternmost edge of Hochgurgl that was the quintessential Alpine piste experience with nobody around, brilliant blue skies, perfect corduroy, and an unbelievable view down the Ötztal.

It can be crowded, but the Mountain Star at Hochgurgl is a fun place to visit.  The view below is walking to the Mountain Star from the top of the Wurmkoglebahn II quad chair, with the Ötztal Alps in the distance. 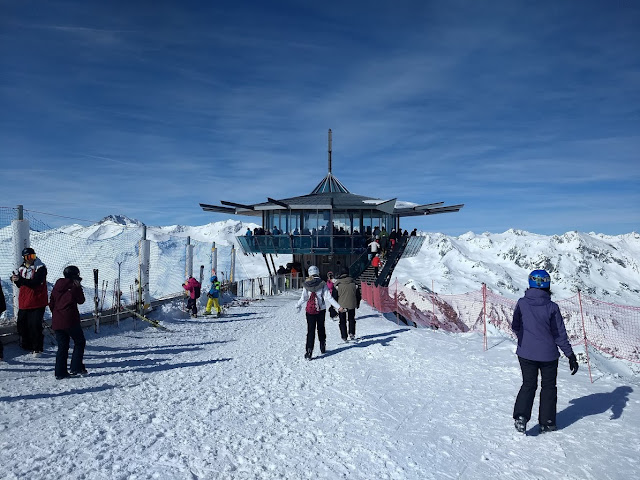 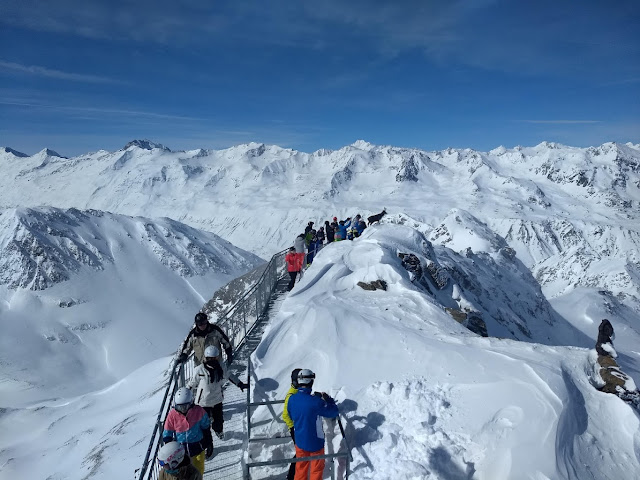 Below is the view into Italy with the Dolomites in the distance.  On this day (Sunday, the other pictures above are from Saturday), haze and low clouds were beginning to develop at lower elevations south of the Alpine Divide. 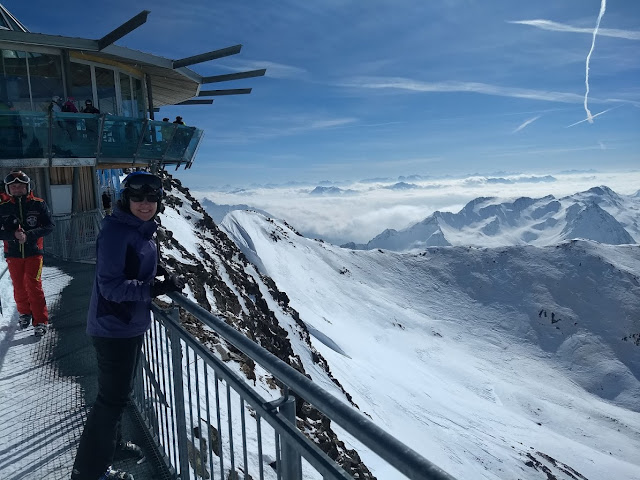 At Obergurgl, the top of the Hohe Mut Alm Gondola is the high point with the top "hutte" worth walking into just to check out the woodwork. 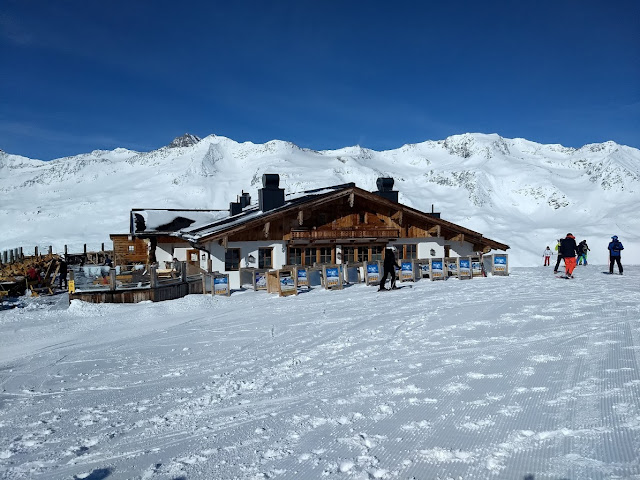 The peaks across the valley from Hohe Mut Alm are well over 3000 meters.  If you click on for full size, you might be able to check out the touring tracks in the center of the photo. 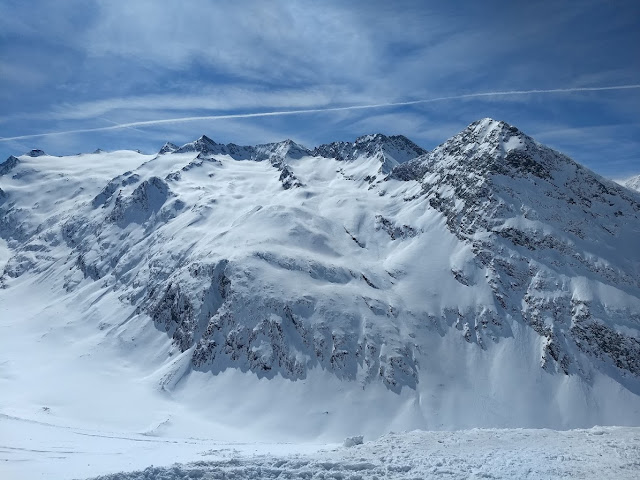 Finally, I mentioned the University Conference Facility.  What a spot above Obergurgl, right on a major trail.  Accommodations are basic, with breakfast and dinner served, which is a great option if you want to decompress.  I need to work on having a meeting here some day! 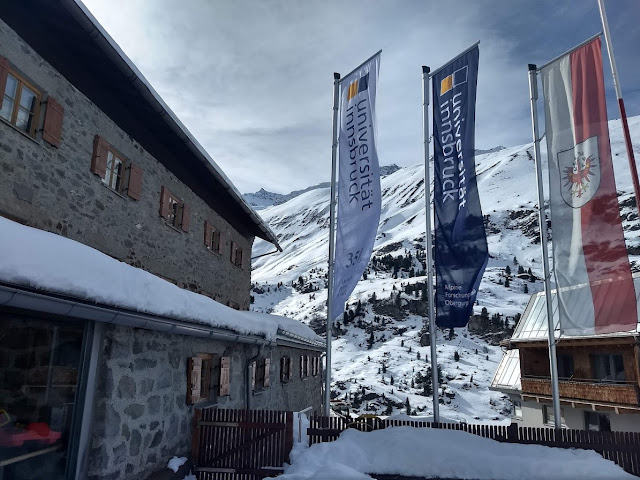 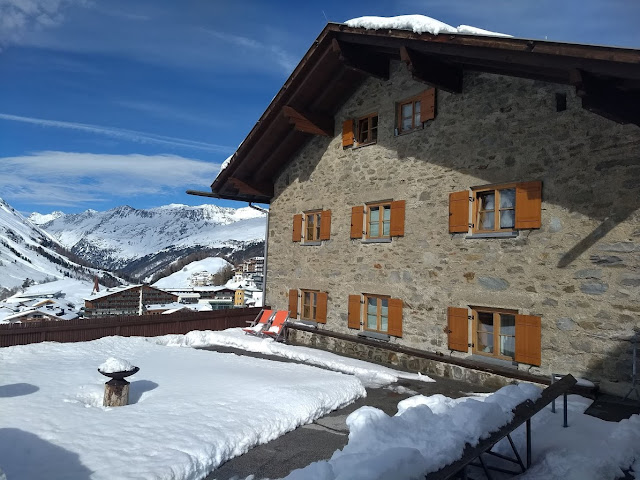 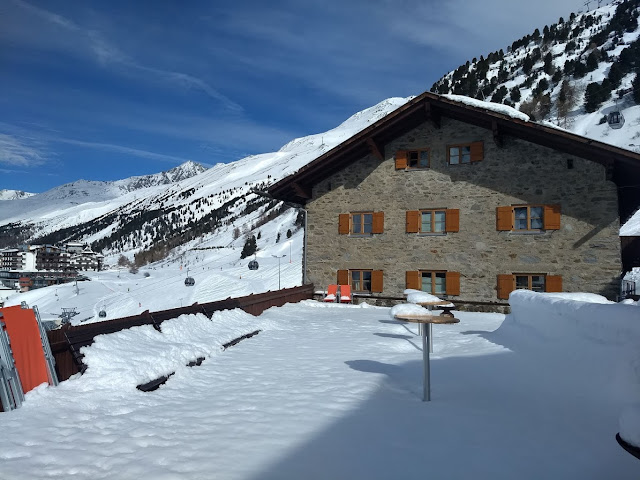 And, still my heart, there's a weather station!  Note that they do quite a bit of research up here, especially ecological. 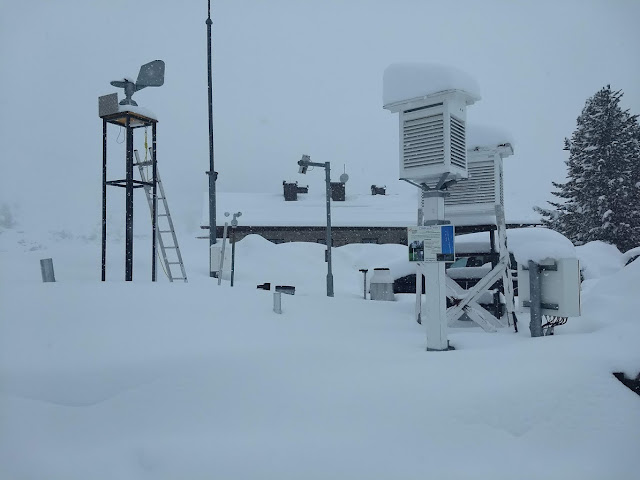 I close with a shot taken through the bus window looking up valley from the lower Ötztal on our way home. 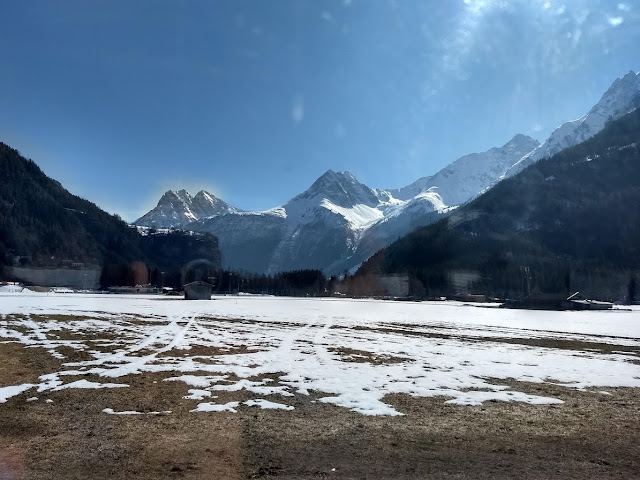 The photo doesn't do it justice as this is spectacular country with big vertical that isn't as apparent through the camara lens.   I am looking forward to a return visit in the spring.
By Jim S Posted at 3/17/2019 11:56:00 AM