There's No Silver Bullet for Congestion in the Cottonwoods

Although I'm in Europe, my social media feeds occasionally remind me of problems that continue to fester or worsen in the Wasatch Range, most notably the continued congestion episodes in the Cottonwoods, such as the one below from 2016. 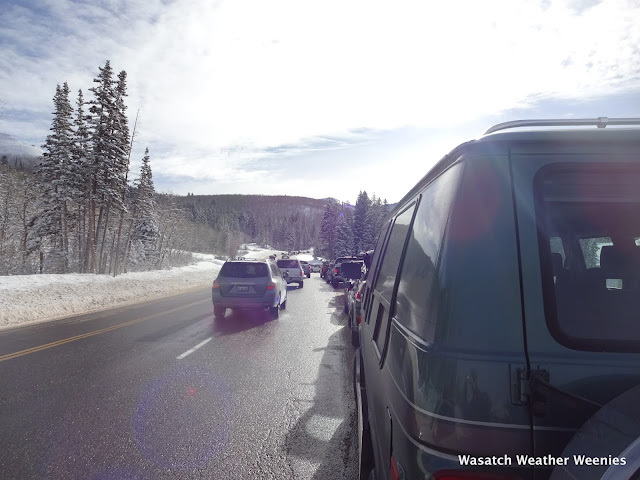 I wish I could say we discovered a silver bullet for this congestion while in the Tirol, but we haven't.  The two regions are actually quite different and this really needs to be considered when making comparisons.  In addition, the Tirol, like any developed region, has its share of challenges too.

In Utah, 2 million people live within 15 miles of the Wasatch Range.  Many tourists do not stay in villages near the ski resorts, but in Salt Lake City.  Alternatively, even if they do stay in Park City they sometimes drive to the Cottonwoods.  Utah skiers are very powder crazed and car oriented.  As a result, skiers converge on two narrow canyon roads that are strongly impacted by a variety of road-weather hazards, especially on powder days.

In contrast, the Tirol has a population of only 750,000 and, according to bergfex.com, 122 ski areas that vary in size from ropetowish to ginormous.  The situation here is much more distributed.  All of Innsbruck does not travel to St. Anton to ski on a powder day.  They have other options, including copious ski touring options in many valleys.  Further, the ski culture here is fundamentally different.  Many Tiroleans are happy skiing near home at the local hill or touring in a nearby valley.

Nevertheless, there are traffic issues in the Tirol as well.  Frequent stagnation occurs across the Brenner Pass with Italy and near the Arlberg tunnel, as well as into areas like the Zillertal which is very popular with weekend warriors from Germany.  A ginormous 34-mile-long tunnel is currently being built at great expense to take more commerce under the Brenner Pass and help alleviate traffic problems.

There are also conflicts here over resort expansion and planning, just like in Utah (click here for an example).  My conversations with people here about these issues are very similar to those I have with stakeholders in Utah.

We should not fool ourselves that the current changes being planned by UDOT for the Cottonwoods will solve our problems.  They will make the canyon safer and they will help some, but the population of the Wasatch Front is growing and more tourists will come as the climate changes and more rapid decline of skiing in lower altitude, warmer climates further increases the competitive advantages of the high terrain surrounding the Cottonwoods.  Quoting James Earl Jones in Field of Dreams, "People will come, Ray....They will most definitely come."

The Cottonwoods (and probably Mill Creek) need to see huge cultural change and major investment in public transit done right so as to not spoil the Wasatch for future generations.  I'm not optimistic.  I expect to write this article again in five years with the situation worse than it is today.  Paradise was paved several years ago, and the trees are now being put in the tree museum.