Some days my cup runneth over and today is one of them.

Fascinating high-impact mountain weather on both continents.  Let's start in my current backyard, Austria.  Innsbruck is a very interesting place meteorologically as it lies in the deep west-east running Inn Valley, but also at the mouth of the Wipp Valley, which begins at the low lying Brenner Pass across the Alpine divide into the Südtirol and Italy.  This exposes Innsbruck to strong Foehn winds when the large-scale flow is from the south. 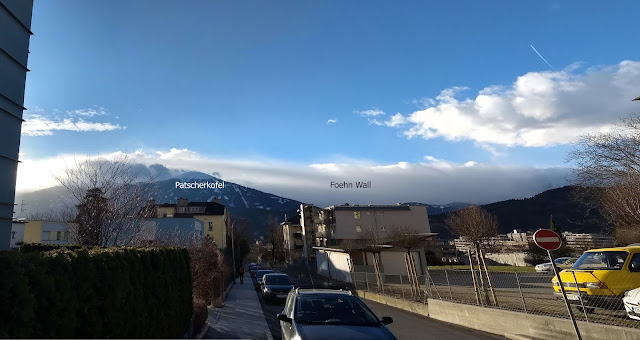 The Patscherkofel is a peak just to the east of the Wipp Valley (to the left in the photo above) that is highly exposed to Foehn winds.  Winds on the summit have gusted over 150 km/h (93 mph)

This is not an uncommon occurrence and in fact the gondola summit terminal is almost 300 vertical meters below the summit and is designed so that it can operate as two separate sections so that only the lower portion runs below the mid station.  Today was too much for both halves.

Meanwhile in the southwest U.S., an atmospheric river has brought flooding to some locations.  The large-scale conditions for the event featured a relatively relatively low-latitude extratropical cyclone off the California coast, with high pressure centered to the south east.  This led to a tropical moisture export and, thanks to confluent flow between the two pressure systems, moisture convergence along and ahead of the cold front.  At 0000 UTC 5 March, precipitable water in excess of 35 mm was found just ahead of the cyclone, colocated with strong southwesterly flow, which together yields strong water vapor flux. 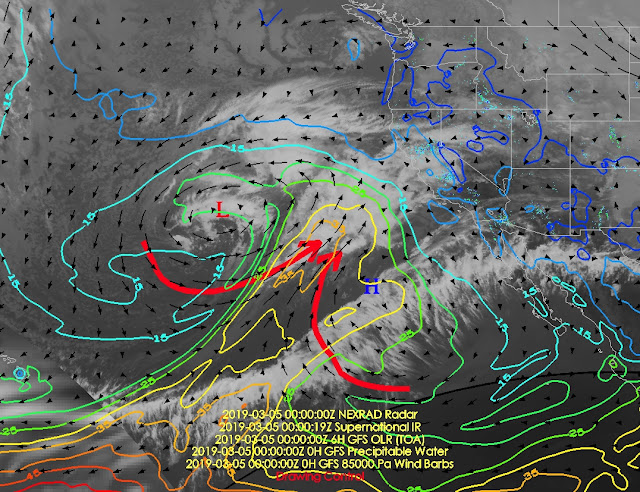 By 0000 UTC 6 March, the high pressure system had weakened and the low center was just off the coast of northern California.  The atmospheric river was impinging on southern California. 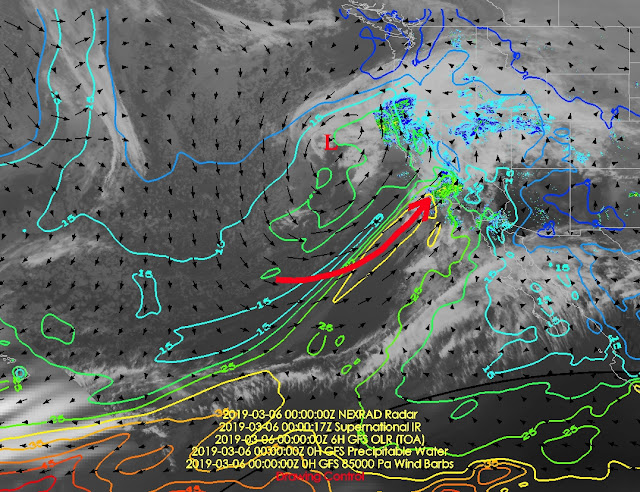 Twenty-four hour precipitation totals for the period ending at 1200 UTC 6 March shows a peak of just over 3 inches in the Santa Ynez mountains of coastal southern California.  That's not a lot by their standards, thanks to the progressive nature of the atmospheric river.  Totals in the southern Sierra are more impressive and draw your attention, but note the wide spread totals of more than a half inch in areas east of the southern Sierra and across southern Nevada, which is a significant amount of precipitation for that desert region.  Death Valley received over half an inch, resulting in some flooding.

By 1800 UTC 6 March, the atmospheric river and strong moisture flux was producing precipitation into southwestern Utah. 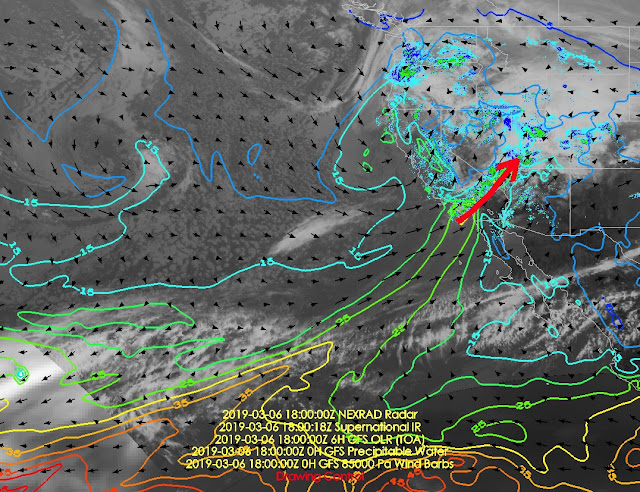 This has lead to some flooding in southwestern Utah.  The National Weather Service reported a major rise in the Virgin River near Quail Creek to 7663 cfs.  Note the abrupt nature of the rise.

Significant rises on the Virgin River continue. Here is the gauge on the Virgin River near Quail Creek. Highest measurement so far is 7663 cfs. This would be the fourth highest flow on record for that gauge. #utwx pic.twitter.com/esHgkW6J0b
— NWS Salt Lake City (@NWSSaltLakeCity) March 7, 2019

I'm not sure if the fourth highest measurement on record that they note below is for a particular day or period.  The ramup up in flow is impressive, but it is still well below the historical maximum of about 21,000 cfs if I'm interpreting the data correctly.

Flooding was also reported along the Santa Clara river, which peaked at flood stage in St. George, but has since receded.

It sounds like low lying areas were primarily effected with some home flooding and evacuations.  Fortunately it was a quick hitting event.
By Jim S Posted at 3/07/2019 02:03:00 AM