The "Stau" Storm has been a frequent visitor to the Alpine Region this winter.  Stau, if typed into Google translator, translates to "traffic jam" and I've seen the word on highway update signs from time to time while we've been in Europe.

Meteorologically, stau storms are storms that feature blocking.  A good example is provided by toe storm today.  Below is a 6-hour GFS forecast valid at 0UTC showing northwesterly flow impinging on the Alps.  This flow, however, does not move over the Alps, but instead around it.  If the Alps were very long, the flow would simply be deflected eastward, forming a barrier jet, as occurs for example upstream of the Sierra Nevada.  However, because the Alps are relatively short in length, the flow splits instead, leading to two branches of flow that circumnavigate the Alps to the east and the west. 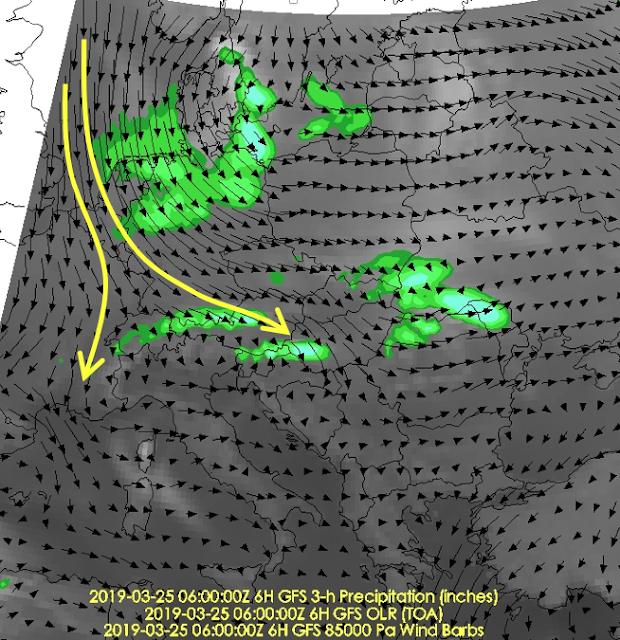 This often yields precipitation that is greatest in the along the northern Alpine rim rather than the higher Alps over the Alpine interior, as evident in the GFS forecast above.  In the satellite imagery, you can see clouds that are banked up on the northern Alps.

Curiously, there is sometimes a cloud and precipitation band that forms over or near Slovenia in patterns like this, as is the case in the satellite image above.  This band forms in along an area of convergence between northerly or northwesterly flow that has traveled around the eastern end of the Alps and southerly flow generated by troughing to the south of the Alps over North Italy.  This convergence can be seen, for example, in the GFS analysis above directly along the border between Austria and Slovenia.

Thus, in the Alpine region it is not as simple as windward or leeward based on the large-scale flow.  One needs to consider the regional scale circulations and their influence on the distribution of clouds and precipitation, before diving into local orographic effects.
By Jim S Posted at 3/25/2019 06:04:00 AM