It's a "meh" weather weekend here in Austria, so we rolled the dice on Saturday and skied Ishgl, a resort I've wanted to ski for some time.

Ishgl sits in western Austria and is a cross-border ski resort given its interconnection with Samnaun in Switzerland.  The resort takes great pride in cultivating a ski hard party hard reputation, as evinced by their "Relax. If You Can" branding program.

Indeed, Ischgl itself is high density and high intensity.  We found it dead when we arrived at 8:30 am and walked right onto the gondola while everyone was sleeping off hangovers.  By 3, when we skied to the bottom, bars were filled with drinkers and streets were filled with expensive sports cars.  A colleague at the University of Innsbruck called it an "evil place" with a smile on his face when I mentioned we were going there.  For the record, we couldn't find a room we could afford and took a train and bus from Innsbruck, which takes about an hour and forty-five minutes from the Innsbruck train station.

Including Samnaun, the resort itself, billed as the "Silveretta Arena" includes 45 lifts and 240 km of pistes.  The Ishgl side has a vertical drop of just under 5000 vertical feet, topping out on the Greitspitze at 2872 m (9422 feet).  Sadly, the lift to the Greitspitze, as well as the Idjoch a bit further down the ridge were closed due to wind.  Access to the Swiss side was closed, so we were very disappointed not to be able to partake in the duty-free shopping :-). 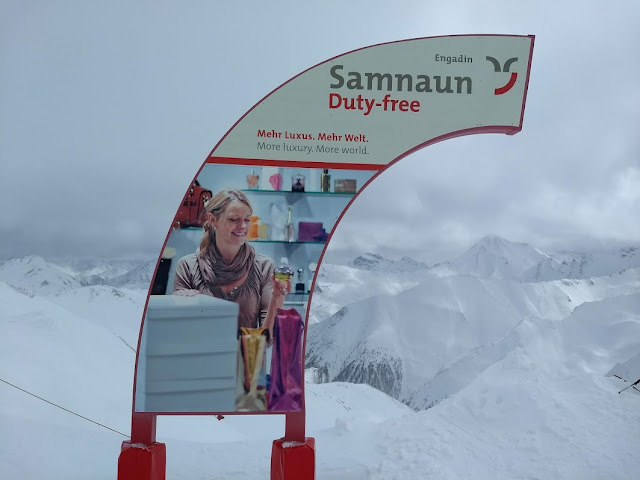 Perhaps the best terrain that we could access was around the Gampenbahn chair, which is pictured below.  The chair runs about 3000 vertical feet and services some nice fall line terrain that is not exceptionally steep, but is quite nice. 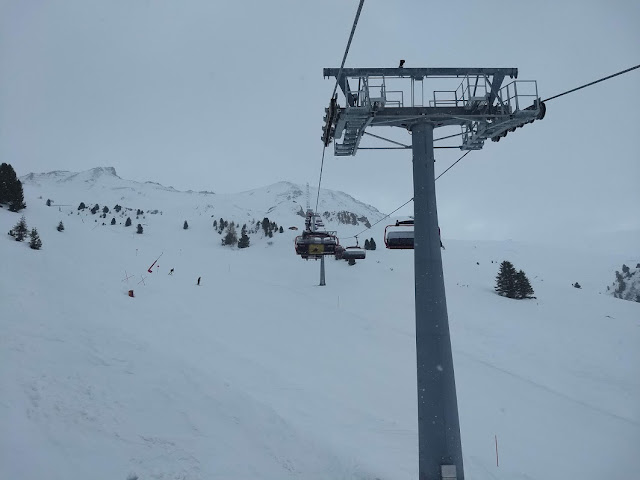 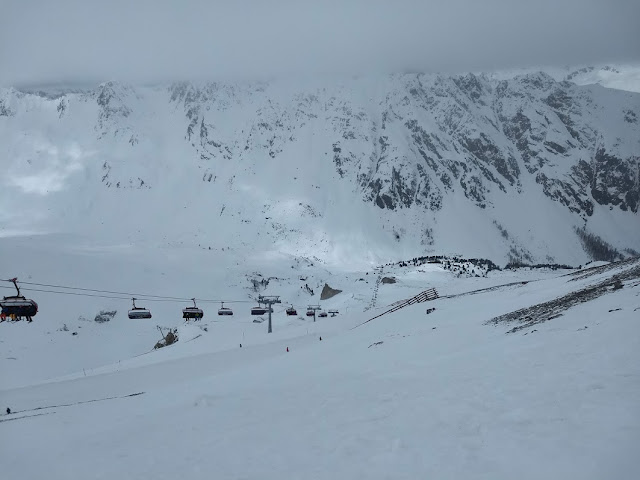 The chair also features heated "bucket" seats.  They're not really buckets, but they are really comfy and a far cry from the old double chairs at Snowbird, which I believe were built for maximum discomfort. 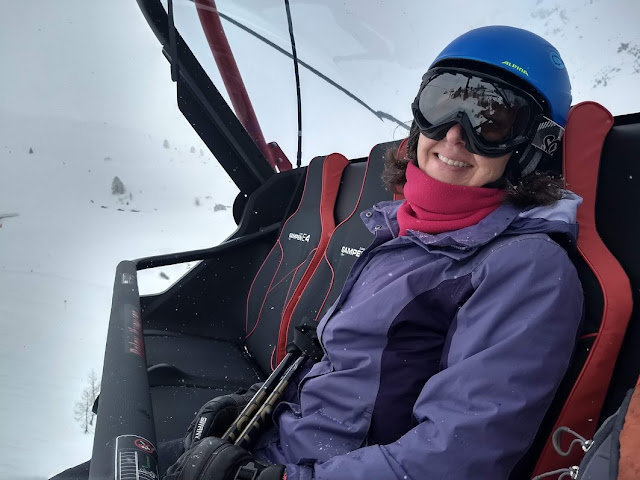 A few years ago, Ishgl installed a cable car to the Piz Val Gronda at 2812 meters.  Apparently this was a controversial install as it was an expansion into new terrain.  The cable car itself, like so many we've seen here, is a marvel.  This one is huge, holding 150 passengers. 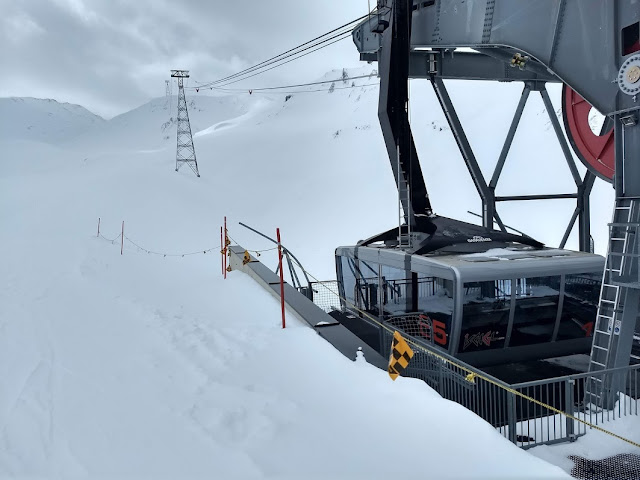 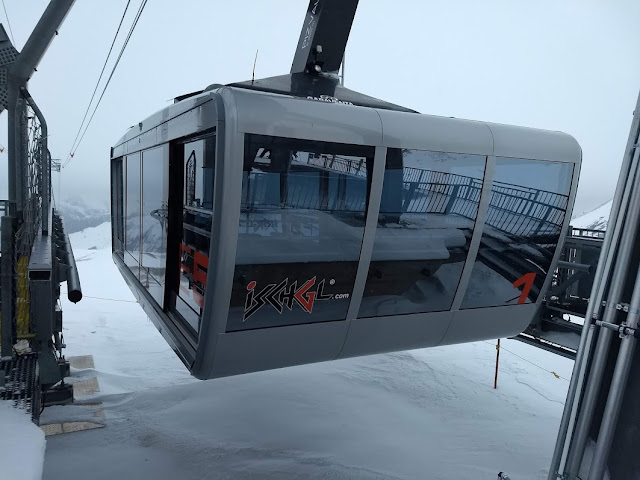 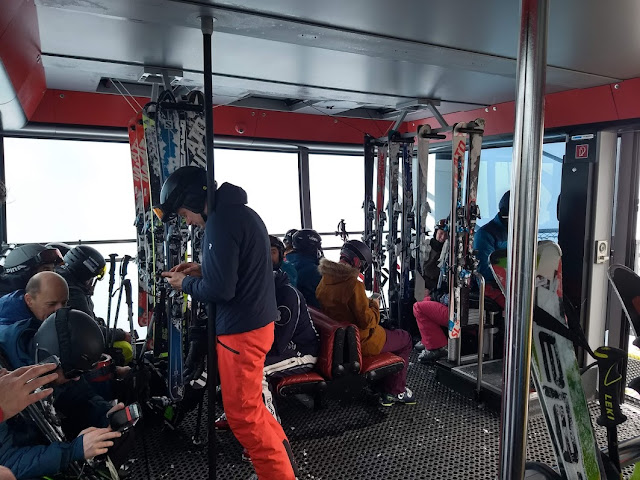 The odd thing about it is that it only rises 517 vertical meters (1700 feet) and it services terrain that is pretty flat and ho hum.  They groom only one trail from the top and it's a yawner.  Pictured below is the relatively steep top section. 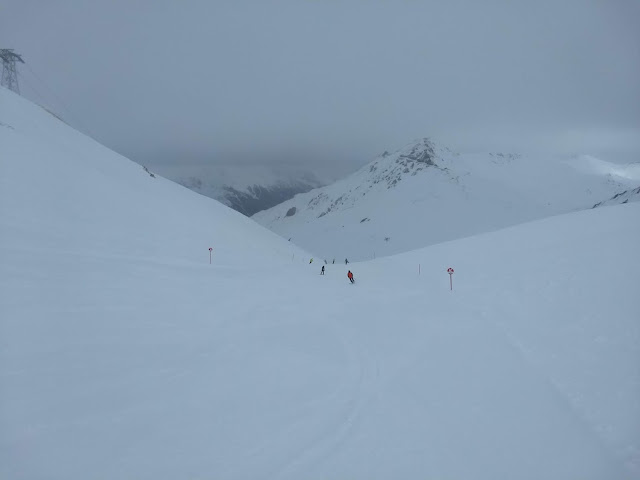 There's some off piste, but it's not long and it looks like some of it ends in terrain traps.  Dopplemayr's description of the cable car suggests it was built in part to preserve the landscape and protect the natural environment, if you can believe that. 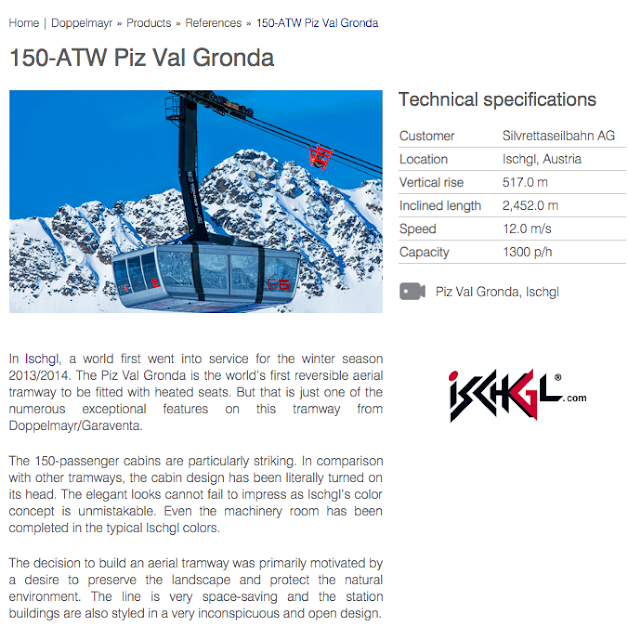 Perhaps it was built to offer some freeride adventures off the back side and the view is probably nice on a clear day.  In any event, it seemed a waste of good money on this day.

On the other side of the resort is the Pardorama restaurant, which is scenically perched as pictured below at 2624 meters on the Pardatschgrat. 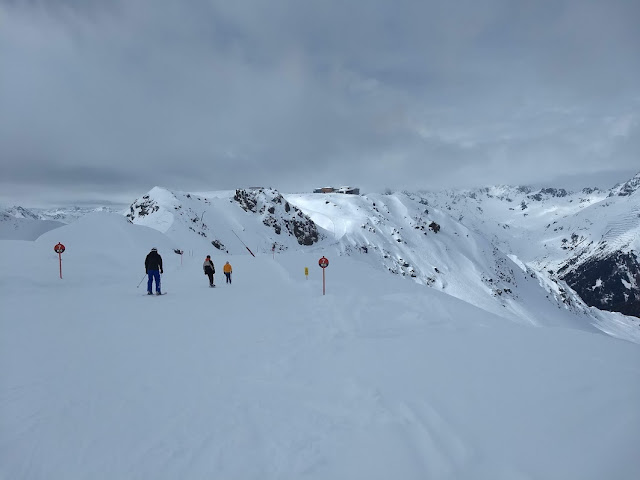 Marketing is important, and it's hard not to take a photo of the iconic Ischgl sign at the Pardorama.  Most of the ski area lies to the left of the valley below. 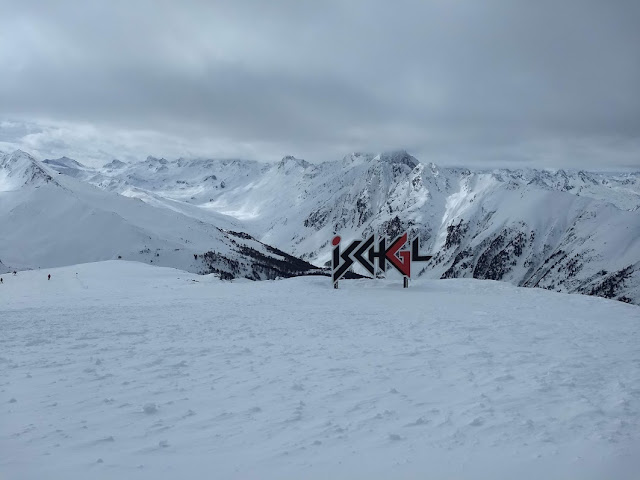 Below are a slew of photos showing a variety of the views and terrain at the resort. 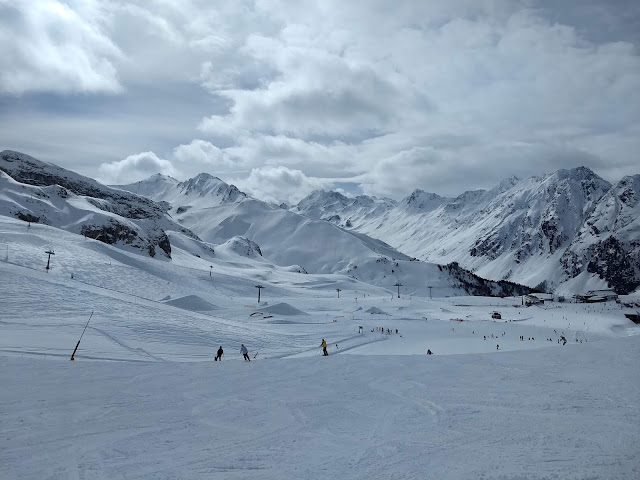 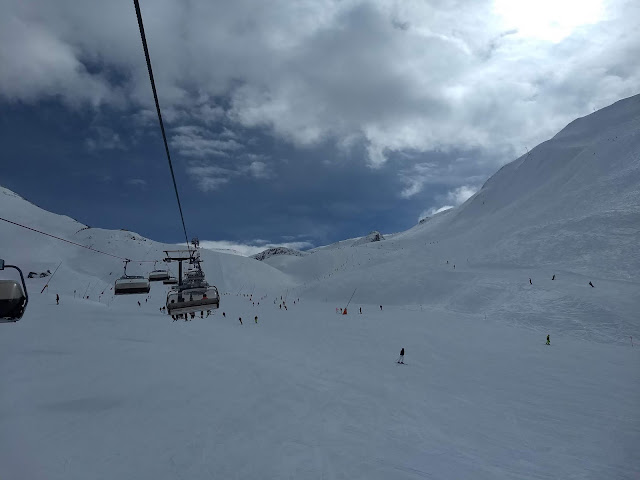 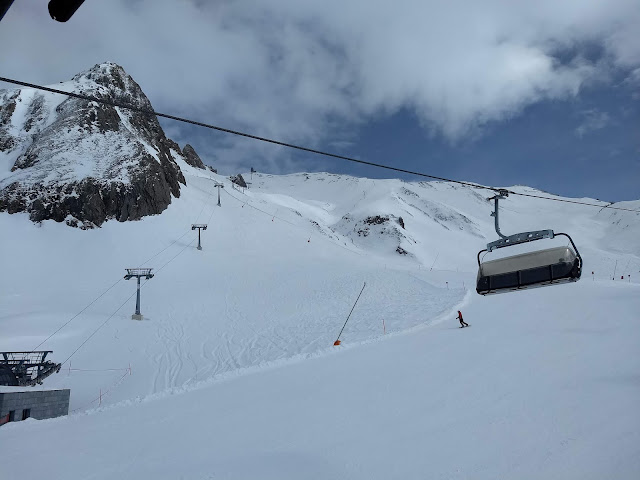 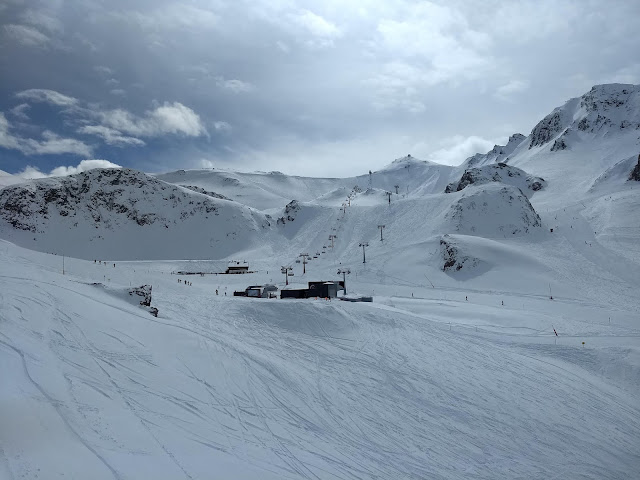 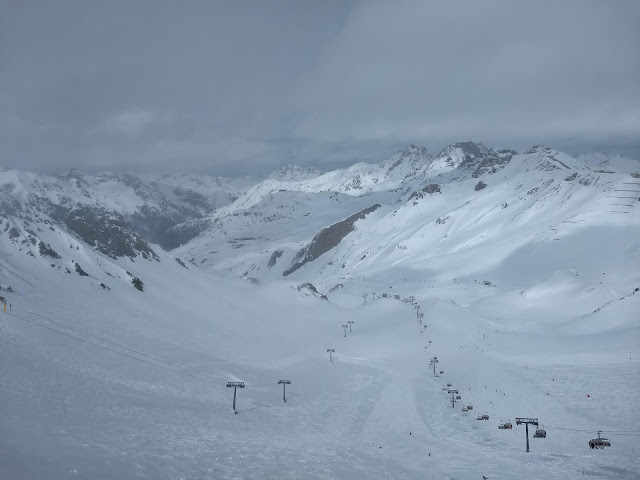 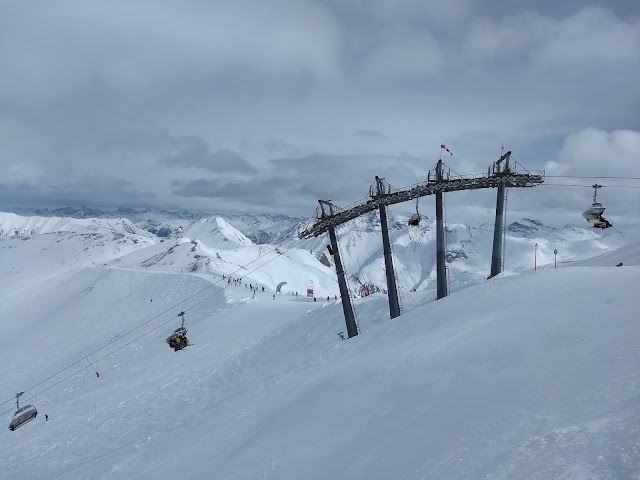 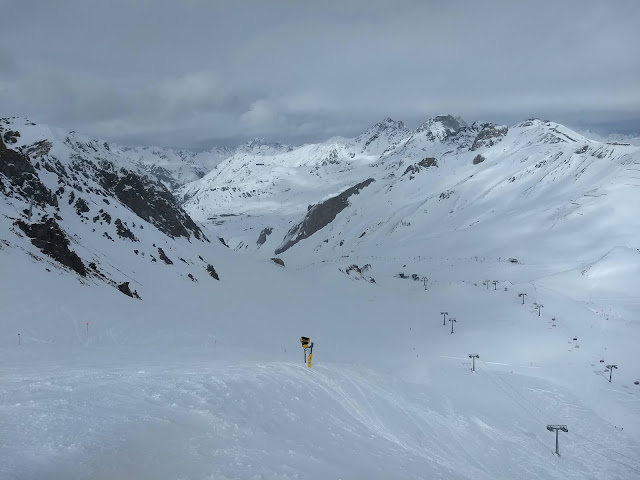 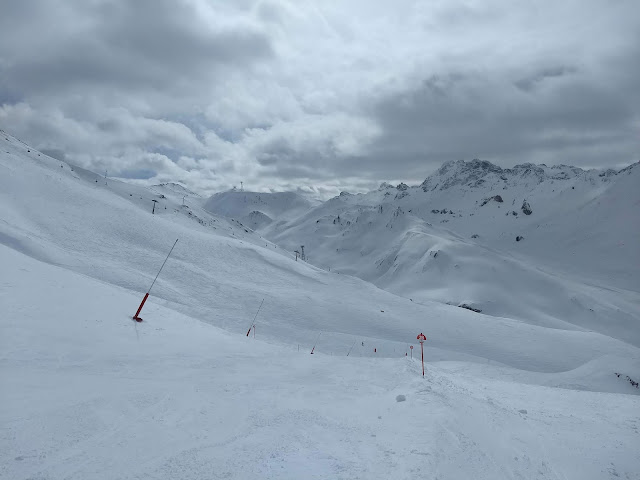 As might be inferred from the photos above, our day started with overcast skies and poor light and then improved.  We decided to finish the day with a final run on the Gampenbahn and then make our way back to the Pardatschgrat for a final run down a very attractive valley to the resort base.  Unfortunately, when we got to the bottom of the Gampenbahn, the lift was closed due to wind.  There is no way to ski out of the area without riding an old fixed grip quad.  This gives me the opportunity to introduce the Austrian lift line to readers who have not been to the Alps.  No rope lines. No organization.  Just a mad push to three turnstiles during which the rules of the Geneva Convention do not apply. 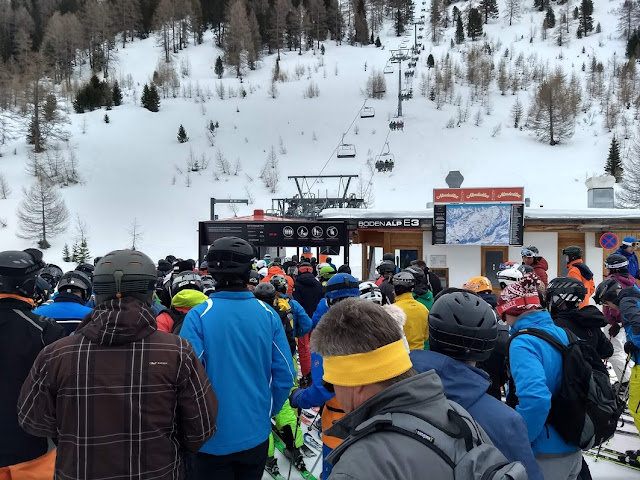 After that scrum, we had to adjust plan and do the "valley run" back to town.  I've skied long enough to know that "valley run" is short for really long skate and double pole on flat to uphill terrain and that is indeed what it was before steepening into a proper beginners run for the drop into Ischgl.  Along the way, there was an avalanche shed built for the run.  We don't even have those on highways in Utah! [Although one or more may be coming to Little Cottonwood]. 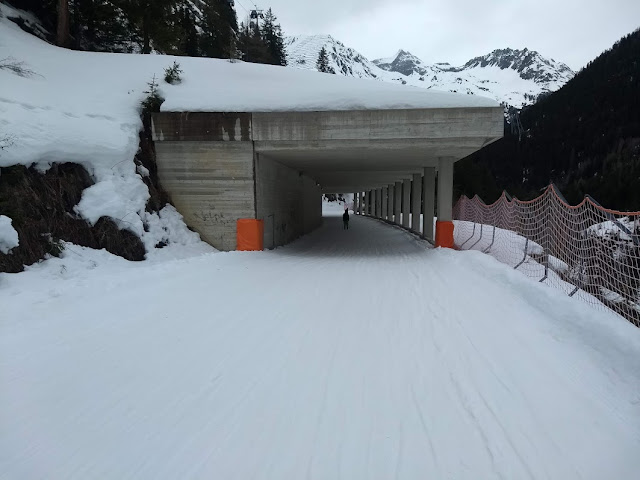 How about a bus stop?  The bus drivers here are rock stars, but even they can't get here in winter.  Presumably this is used in the summer. 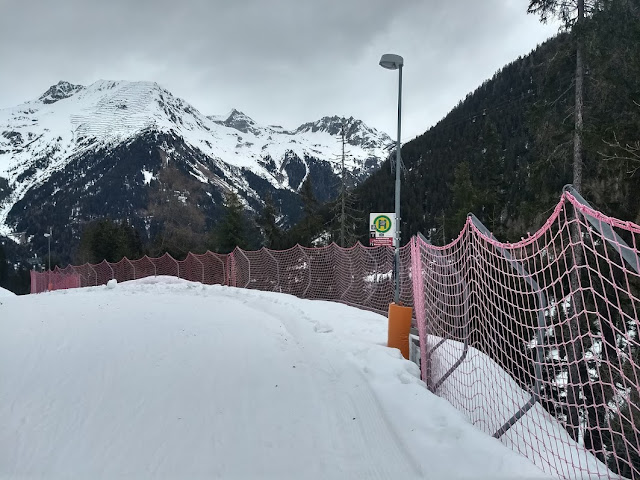 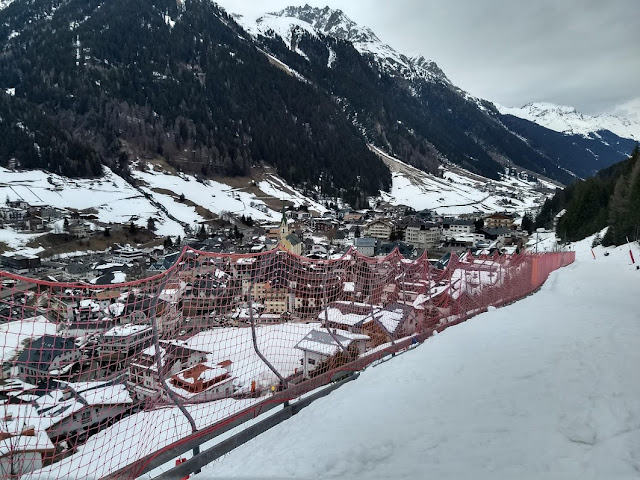 And finally, the trail ends rather unscenically, at a paved road in town, but of course, very close to après options. 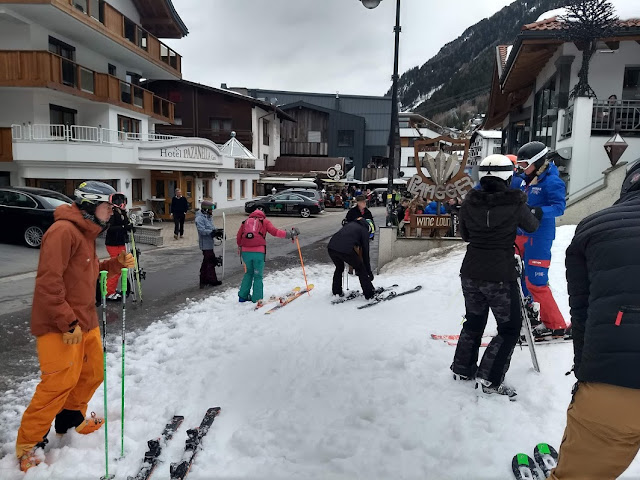 We caught the bus and train back to Innsbruck.  Plenty of great places to eat here with many ethnic options.  However, there was a craving for Tirolean.  We don't always eat Tirolean, but when we do... 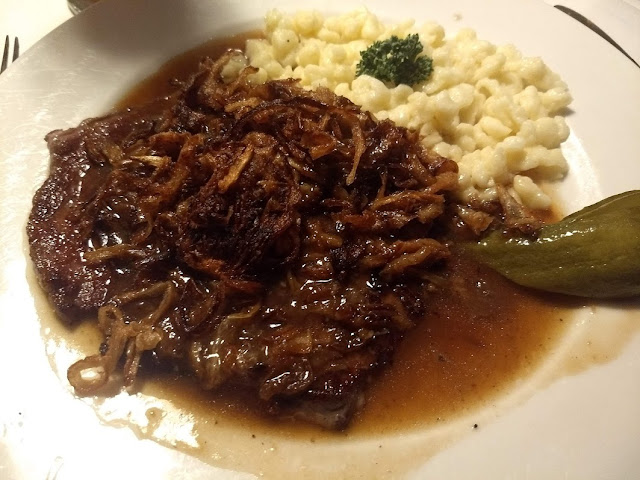 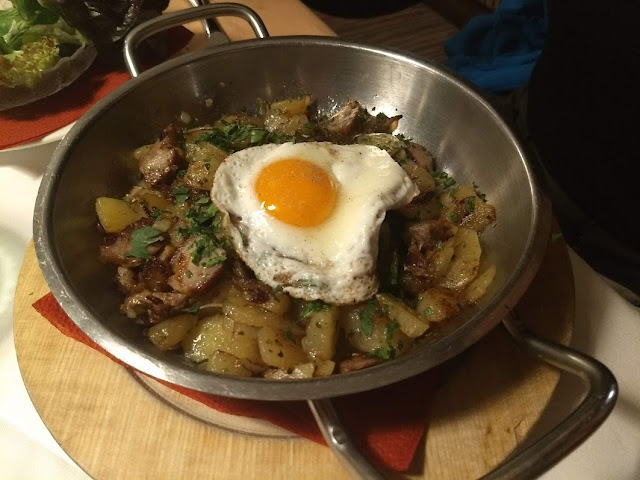