The German word Schön translates to beautiful and yesterday we toured the Schöntal (beautiful valley) to the Schöntalspitze, a "minor" 3000 meter peak in the upper Lüsenstal southwest of Innsbruck.  The photos below were taken either by yours truly or my touring partner.

The drive up the Lüsenstal was spectacular, even with the mountains mainly in shadow.  We arrived at the Lüsener Alm start point (1634 meters) before 7 AM.  This is a popular spot for ski touring and the photo below does not show the completely full lot further left. 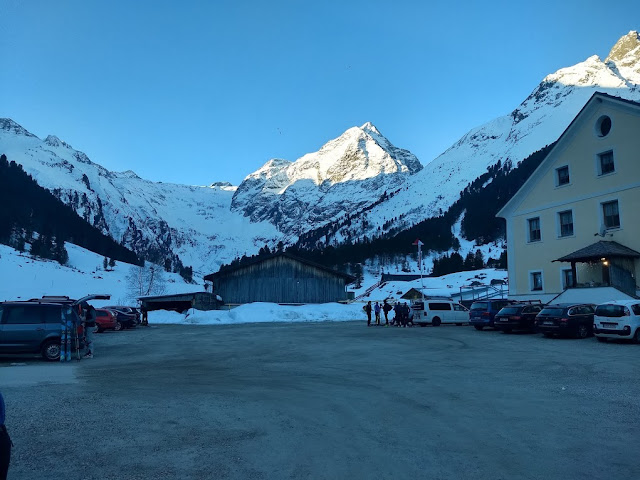 For my nordic friends, there is also a groomed ski touring track here.  Mountain Dell on steroids. Quickly we were on the trail.  Initially the ascent in the shady valley was difficult and at one point we had to cave and put on ski crampons.  However, we eventually ascended into the "beautiful valley" and we were able to ditch the ski crampons (temporarily) as the snow became more compliant to our skinning requests as it softened in the sun. 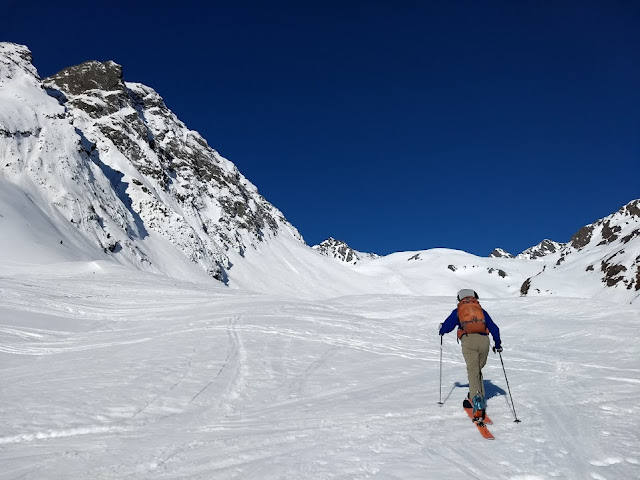 That was the good news.  The bad news was the valley was in full "microwave" mode and it was easily the hottest ascent I've done since arriving in the Alps.  I've had to go with a euro style setup for times like these.  Note in particular the headband in the photo below.  Also note how tracked out everything is just a few days after the last storm.  Keep in mind that this route is advertised as being less popular than others that begin in this area. 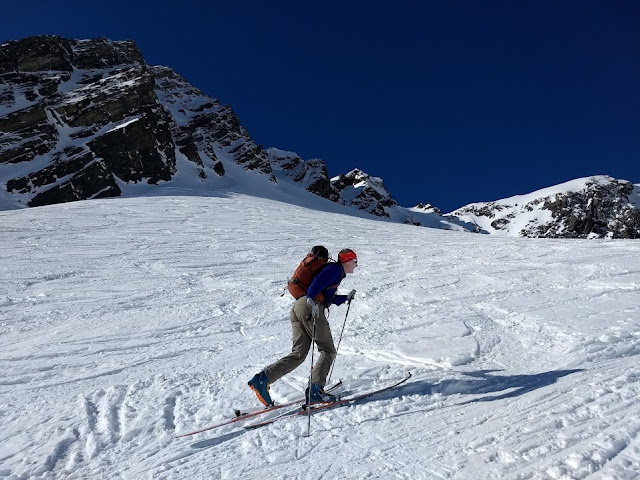 Nearing the summit, we came across the usual Tirolean traffic jam and Bruce Tremper's worst nightmare given the large number of people on the slope.  Many of my Utah friends, whose motto is "never above the last good turn" would have turned around here and skipped the summit. 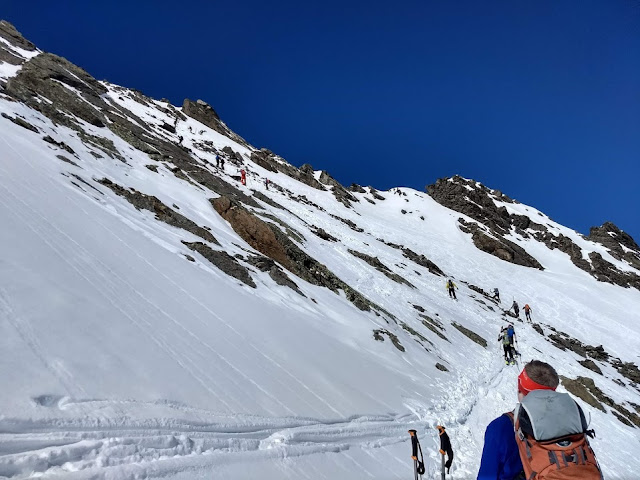 We're not that smart.  Out came the ski crampons.  Some tourers were booting here, but we found the going reasonable on skis initially.  My Austrian ski partner ended up ascending the entire thing on skis.  I caved about 2/3 of the way up and switched to booting. 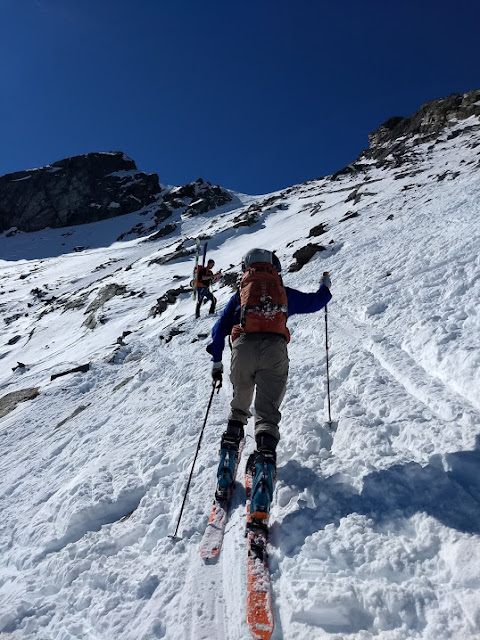 The summit views were spectacular.  The photo below is taken looking roughly northeastward with the Schöntal the broad snow filled valley directly below and the Inn Valley and Innsbruck in the distance. 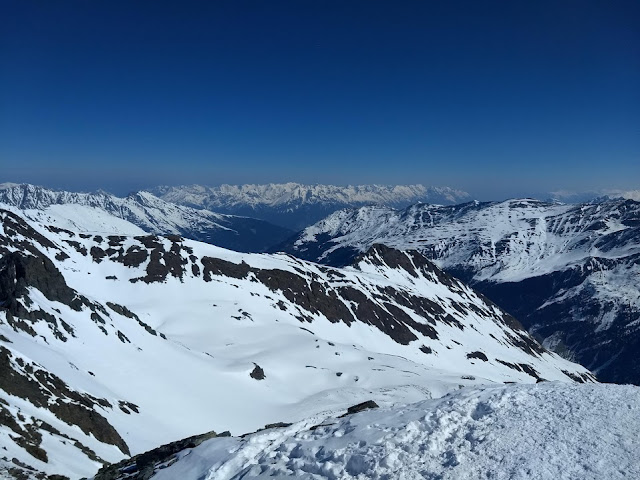 Here's a couple of photos on the summit.  Note the very appealing lines on the north side of the Grubenwand to lookers right of me in the top photo. 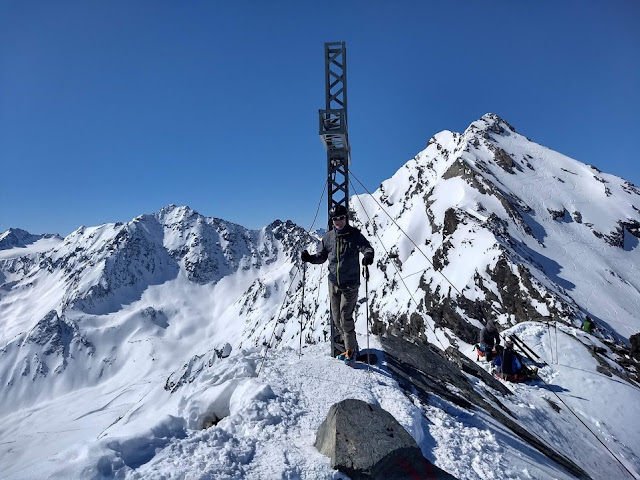 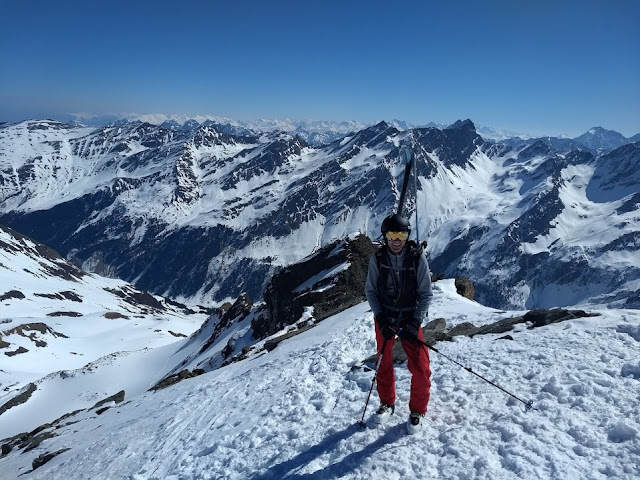 I mentioned "never above the last good turn" and in fact the summit was pretty much an unskiable mix of scree and snow.  We and everyone else who was up there booted down the top 100 vertical meters or so. 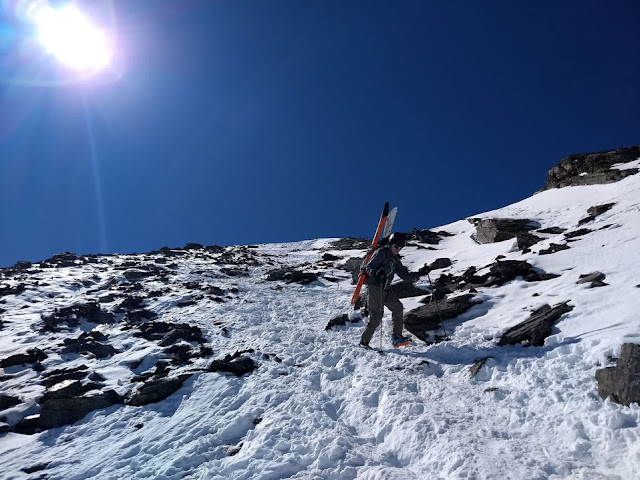 Once below that, the potpourri of sun crust, corn, crud, and powder began.  Keep in mind it snowed here a few days ago and look how tracked everything is.  If you think the Wasatch backcountry is crowded, come to the Tirol. 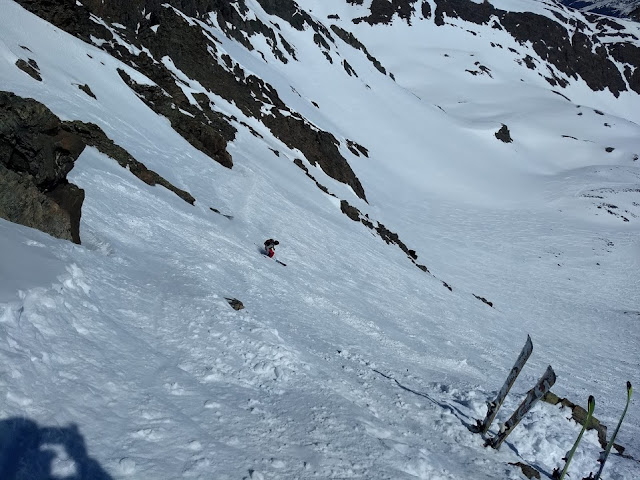 I accidentally put my phone camera into some funky mode for the photos I took while we were skiing in settled powder, but I include the one below just to show that with some effort we found it.  I know it's not much after the season you've had in Utah! 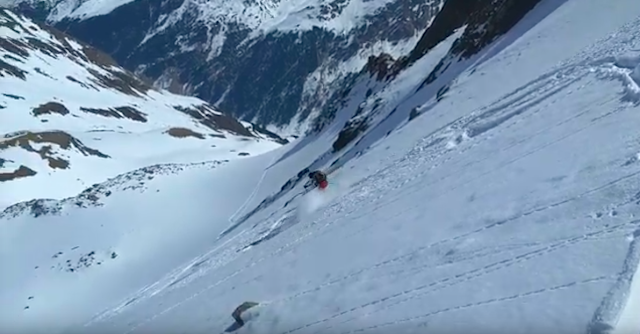 The total vertical is approximately 4500 vertical feet.  That's not even a long run here.  The cover was actually quite good for the most part, but we did manage to find a muddy stretch near the bottom.  On the climb up, we just skinned across this stuff as it was frozen. 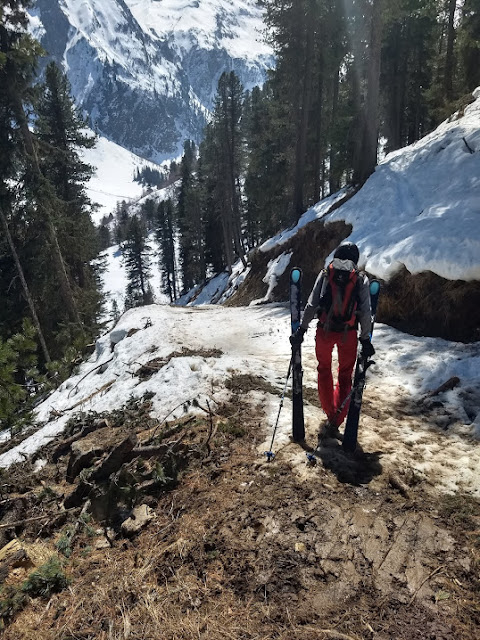 The final stretch to libations below.  One thing that has been nice about touring here is the access.  No long brushwacks or rocky narrow trails to navigate.  Just every type of snow you can imagine. 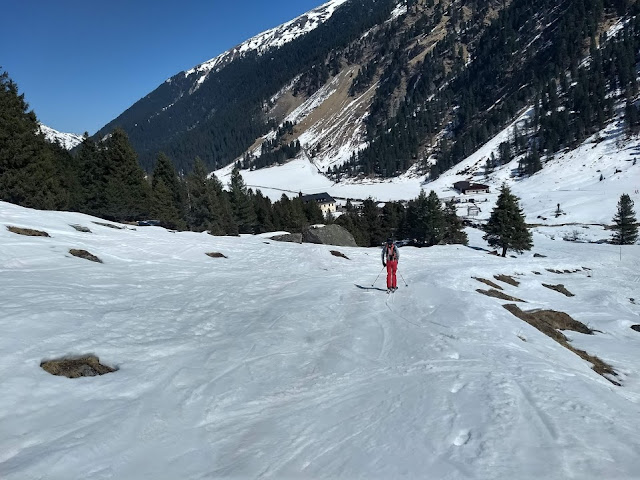 Finally libations and strudel.  This was quite a place to finish off a tour and sit in the sun.  The spectacular peak in the photo below is the Lüserner Fernerkogel (LFK), which reaches 3298 meters.  One publication called it the Matterhorn of the North Tirol.  The apron to lookers left was completely tracked out by tourers.  The English translation of the touring tip in the guide on bergfex.com states that "Loneliness is rarely found at the LFK." 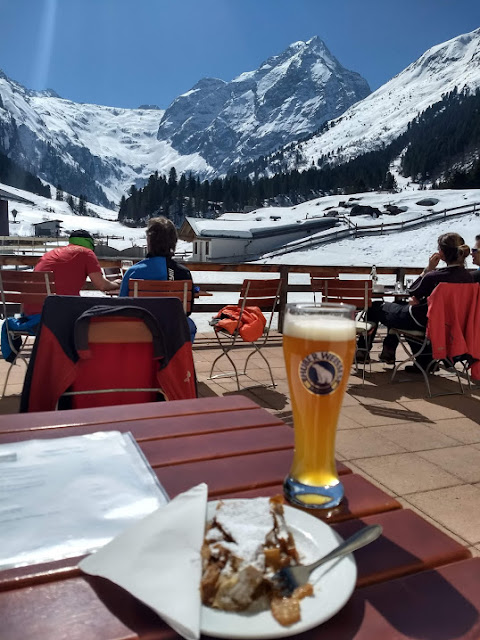 We also found the Tirolean equivalent of the so-called "weather rock" here.  They claim it is from the 8th century and, with wisdom like that, it is surely accurate! 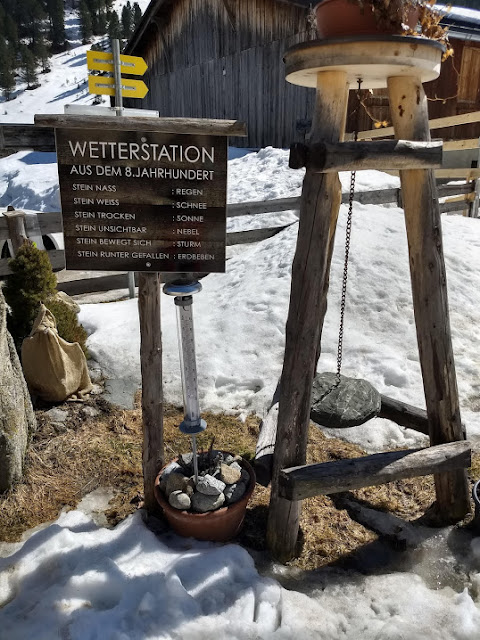