When Will Snowbird Close?

My focus on Alpine adventures has distracted me from exploring Utah's snow and snowpack for sometime.  I know it has been a good (possibly great?) ski season since I left, but now lets turn our attention to the spring melt.  To make this post a little easier, however, let's ask a simple question.  When will we see the end of snow cover at the Snowbird SNOTEL (9640 ft near the Mid-Gad Restaurant)?  This is probably a reasonable approximation of Snowbird's closing date.

This year has been above the median over the past 30 years, with a peak snowpack water equivalent of about 58.1 inches on April 19 and 20 (blue line).  This is about 35% greater than the median peak of 43.1 inches (magenta line), although peak median occurs somewhat later on 1 May.  There has been a decline in snowpack water equivalent over the past week indicating that the snowpack is "ripe", meaning that it has warmed to the melting point through depth and energy input can lead to meltwater. 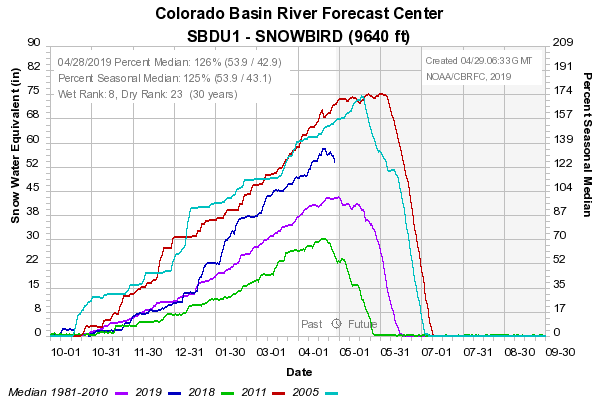 There is, of course, a chance for recovery if the pattern changes, but I think a gain of several inches of snowpack water equivalent is unlikely with the pending storm. Later in May we'll have to see as discussed later.

Also plotted are two recently big water years, 2005 (light blue) and 2011 (red).  One can see that those years were exceptional both in peak snowpack water equivalent (about 75 inches), but also the timing of the maximum.  This is especially true for 2011, which peaked several times at 75.1 inches, the last being on 1 June, the first day of meteorological summer.  In fact, that season we were getting freshies up through Memorial Day weekend.

All of this is to illustrate that how late that Wasatch snowpack persists and Snowbird can operate is a function of both how fat the snowpack is, but also the weather that comes during spring, especially May.  If you want a July closing date, you need a deep snowpack, but also a cold pattern to maintain that snowpack late into very late May.

Somewhat paradoxically, the later you can maintain a deep snowpack, the faster it melts.  This is because energy input into the snowpack late in the spring can be much larger than it is early in the spring due to the higher angle sun, longer day, and higher temperatures.  As a result, both 2005 and 2011 saw rapid snowpack loss once snowmelt began.  In 2011, 75 inches of snowpack water equivalent melted in 39 days.  In 2005, it took 48.  The former represents a loss of almost 2 inches a day, which is what you see on the warmest, sunniest days in late spring and early summer.

Notice that the line for last year (green line) has a slower decline.  The energy input into the snowpack in April is lower, so even though the snowpack is thinner, its melt rate is lower. Thus, the rate of snowpack loss is a function of time of year more than it is the maximum depth of the snowpack.  This can also be inferred from the spaghetti plot of snowpack water equivalent over the last 30 years at Snowbird.

A wildcard is how dusty and dirty the snowpack is, which results in greater absorption of solar radiation.  That, however, is not well documented over the past 30 years, so it's something I can't evaluate.

To conclude, snow cover at the Snowbird SNOTEL depends strongly on the weather in May.  A hot, dry May could still produce the end of snow cover before the end of May.  A cool, snowy May could extend the snow-cover season into mid June (later is not impossible, but quite unlikely).  Snowbird's closing date will depend strongly on the weather that comes in the next month, as well as their motivation to continue operations.
By Jim S Posted at 4/29/2019 01:15:00 AM