Today was our last chance to ski our favorite local Innsbruck ski area, Axamer Lizum, but it was their "Ugly Ski Day", which we understand is a bit like Alta's Frank on steroids.  We were warned it would be a long day of debauchery and an even longer and exceptionally cramped ride on the bus, so we elected to go with a friend to Stubai Glacier instead.

Stubai is near the Alpine divide and benefited from the southerly flow storm on Thursday, picking up 80 cm of new snow.  It was closed on Friday due to avalanche danger.  Thus, the resort was essentially untracked when we arrived.

Avalanche danger was considerable, but everything was skied with impunity by the volunteer stability testers.   The most serious incident we saw was someone rag dolling down a steep face while we were on our first chairlift ride.  They survived, but one of their skis did not elect to surface.  He looked for about 2 hours, but said ski was never found.

He probably wasn't the only one.  The snow looked great from the lifts, but had a bit of a density inversion that required continuous attention while making turns.  One could find some stiffer crusts in other areas.  I nibbled away at moderate angle slopes and got a few decent turns in.

One thing we did mid morning before the sun baked it was ski most of the 10-km run from the upper mountain down the Ruetz Valley to the base.   The route was relatively free of people when we skied it.  Our route wasn't quite from the top, but I think covered almost 4500 vertical feet.  It's easy skiing, but a nice experience. 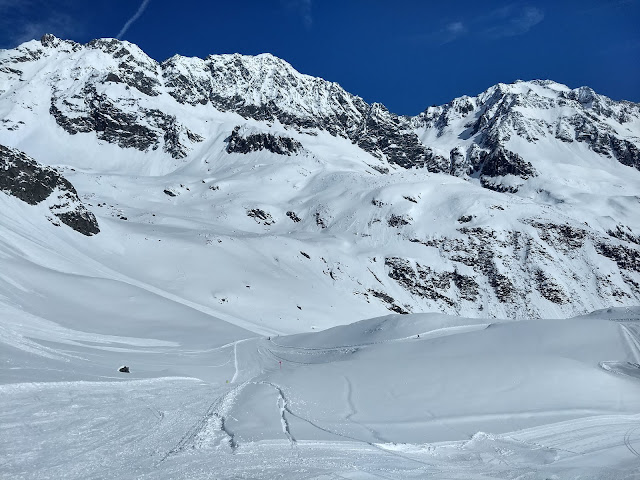 The panorama below is looking south from the upper mountain into Italy where the lowlands were covered by stratus.  If you click and enlarge, you can see the Dolomites in the distance.

The view below is looking down the Windachtal (Windach Valley), with the Oetztal Alps in the distance.  If you click and enlarge, you can see the Hildesheimer Hütte (read about it here), which is perched at 2900 meters on a ridge just left of center.  What an amazing spot.

Deepening stratus clouds eventually began to spill across the Alpine divide, as can be seen in the image below.  Perhaps later in the day, skiers were treated to a "waterfall cloud" display, but the cross-barrier flow wasn't quite strong enough when we made our last trip to the ridge. 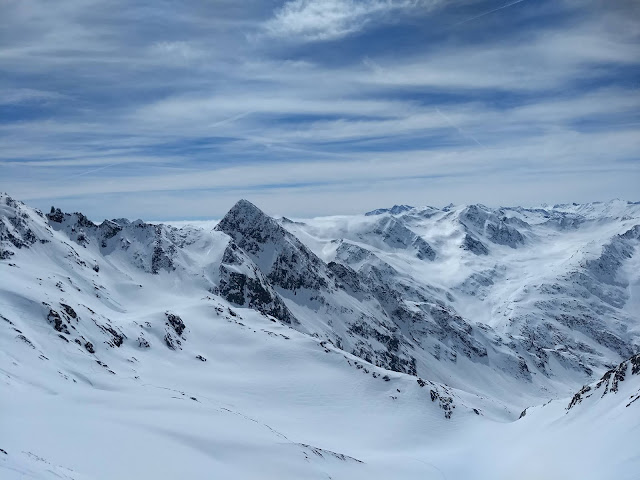 Austrian skiers love sonne und schnee (sun and snow).  Note the crowd in the photo below next to the Dresdner Hütte at 2300 meters. 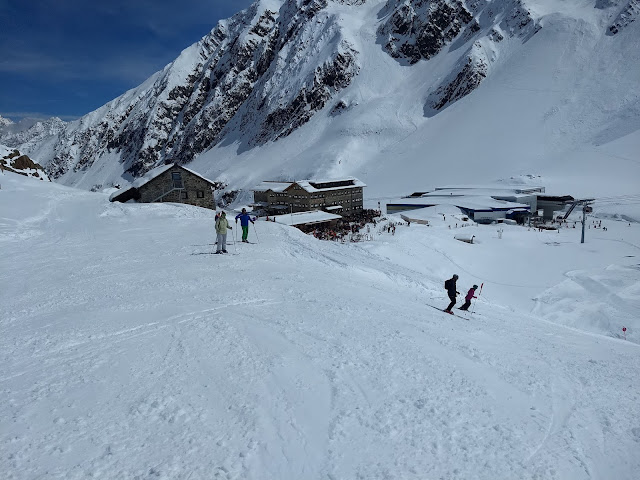