Southern Alps Getting Some

The northern Alps have been the primary beneficiaries of snowfall this season, but not to be ignored, the southern Alps saw or are seeing action from yesterday through today.

The image below shows the snowfall forecast for the Alpine region as produced by ZAMG, the Austrian Weather Service, and provided by bergfex.com.  Amounts in excess of 50 cm are expected in high altitude regions of the Eastern Valais, Bernese Oberland, and Graubünden Cantons of Swizerland and in high mountain areas of northeast Italy. 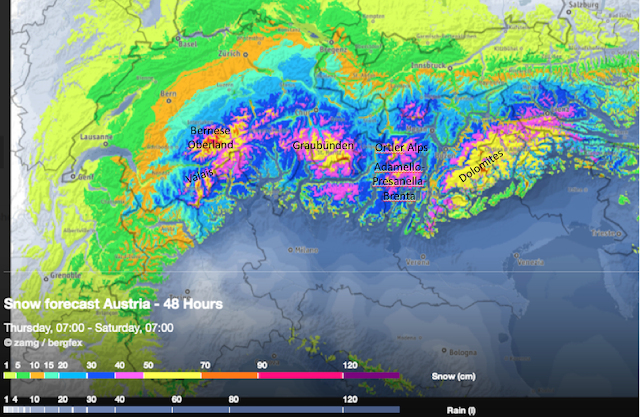 A complex upper-level trough and frontal system moving through the area is the synoptic driver of this snowfall.  Moisture transport through the gap between the Rhone Alps and Apennines and by blocked flow up the Po Valley, combined with the convergence and orographic lift of those two airstreams, is contributing to precipitation generation in the East Valais and Graubünden.  Heavy rain will also fall in lower elevation areas of Switzerland and Italy.  The Bernese Oberland lucks out because the cold front has essentially stalled over the western Alps.  The flow vectors below are for 925 mb (about 750 m MSL) or the surface where the model terrain is above that level. 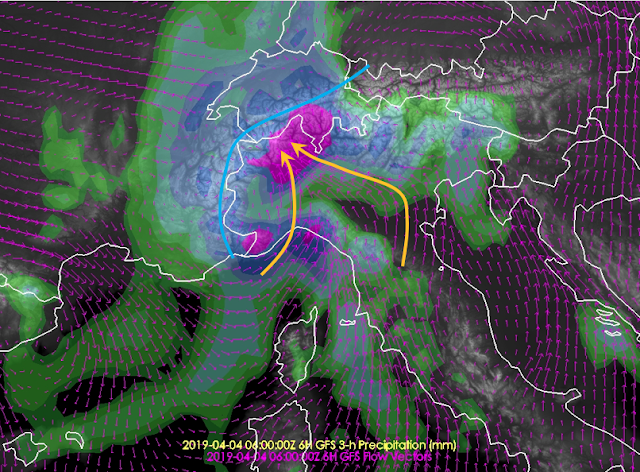 As the system shifts eastward, the mountains of northwest Italy benefit from strong south-southeasterly flow and moisture transport over the Adriatic Sea. 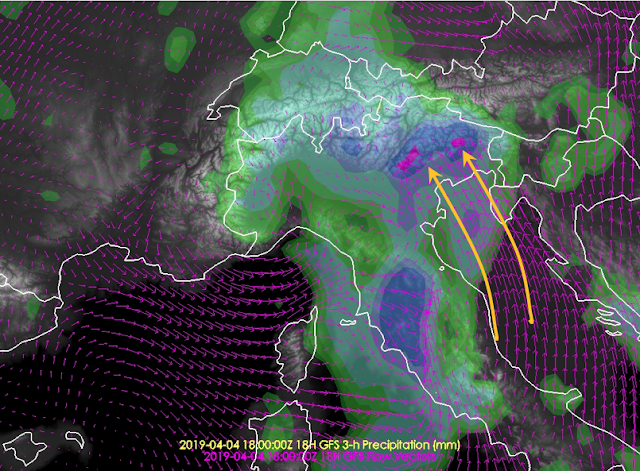 One of the more complicates aspects of weather prediction around here is that the Alps have a very strong regional influence on fronts and circulations, much more than the more linear and north-south oriented barriers of the western U.S.  The closest corollary would be the influence of the Sierra Nevada on fronts and cyclones over the Intermountain West, although the orientation and scales of the ranges are different, as well as the latitude.  Some of these effects can be seen in the wind fields above.