The Hahnenkamm is a mountain in Kitzbühel, Austria that is host to a series of World Cup Alpine ski races each winter.  The downhill, following a course called the Streif, is the Super Bowl of men's Alpine skiing.  Winning on the Streif requires great skill and huge risk taking.


Kitzbühel is one of the most famous ski resorts in the world and links with multiple other ski areas to provide a resort with 57 lifts, 230 km of pistes, and 41 km of additional marked ski routes.  Unlike the raw, big, imposing terrain of some Austrian resorts like St. Anton or Ischgl, the mountains around Kitzbühel are lower with less relief.  Kitzbühel itself sits at lowly 762 meters and most of the ski terrain lies below 2000 meters. 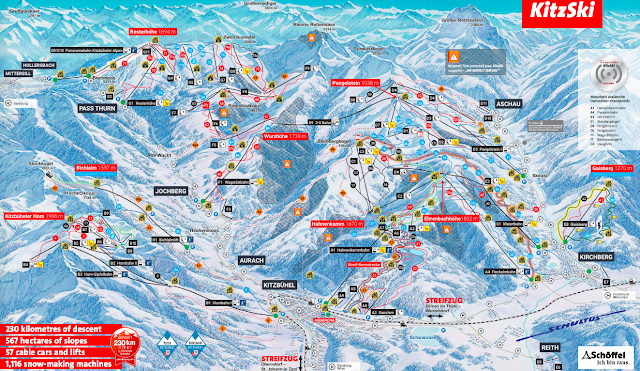 Promotional materials claim a mean seasonal snowfall of 2.5 meters (100 inches) in the valley and 8 meters (314 inches) on the mountain.  I can't confirm that without more digging.  What I can say is that mean annual precipitation analyses for the greater Tirolean region show the advantages of the snowy Arlberg region near and north of St. Anton and the northern rim of the Alps in general.  The mountains south of the Inn Valley, from about Innsbruck west, are drier.  However, near Kitzbuhel, the precipitation is greater again.  For its altitude, it does well compared to the mountains south of Innsbruck.  Nevertheless, it isn't the Arlberg (which also has altitude advantages) and it certainly isn't the central Wasatch.

Andrea and I did not ski Kitzbühel this winter, but it is a short 70-minute train ride from Innsbruck, so we decided to head over for a look.  We trolled around the Hahnenkamm base area and went for a hike.  As noted previously, the mountains around Kitzbühel are not as imposing as in other areas of the Austrian Alps.  They are, however, beautiful in their own way.


The Wilder Kaiser mountains to the north (pictured below), which top out at 2344 meters, are also quite picturesque.  The rock and snow made us think of a mini version of the Teton Range. 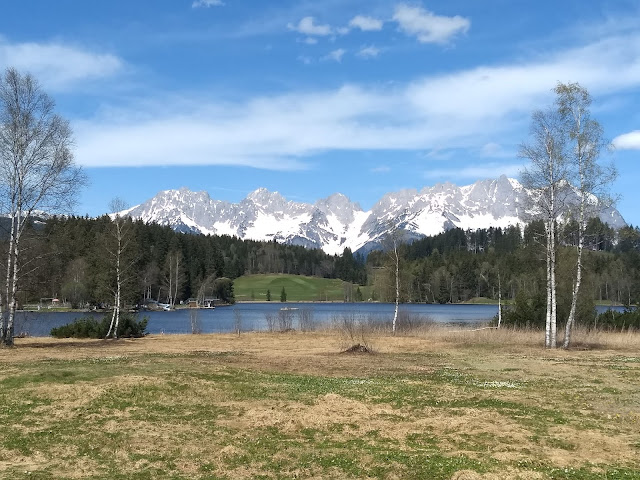 The Hahnenkamm itself is not all that impressive from town.  I took the photo below from the church cemetery though for added effect.  Look carefully and you can see the feared Hausberg Traverse, which has crushed the hopes of so many racers. 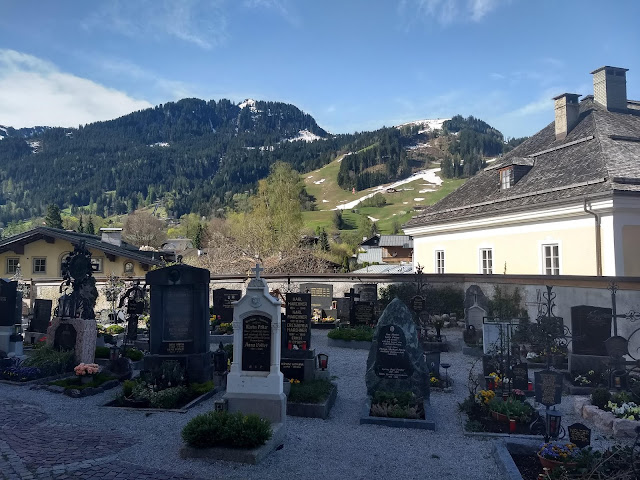 Kitzbühel is staying open until May 1st, and they are doing their damndest to keep top to bottom skiing going on the Hahnenkamm. 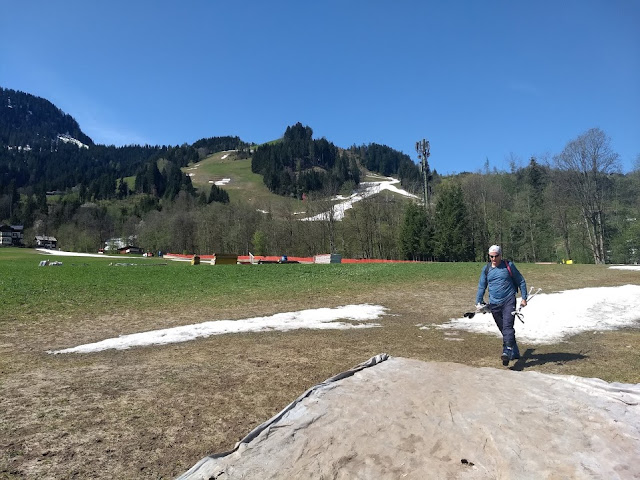 It looked like something from late-season Vermont.  This was taken very near the base and the dude pictured appeared to piece together a nearly continuous run down the Hahnankamm slalom slope and its ribbon of snow on the right (Hausberg traverse on the left).  Still, it is alarming to see the mighty beast in such a weakened state.

There's a small park near the bottom of the Streif that is worth a few minutes if you are ever in the area.  It is appropriately named Legenden Park. 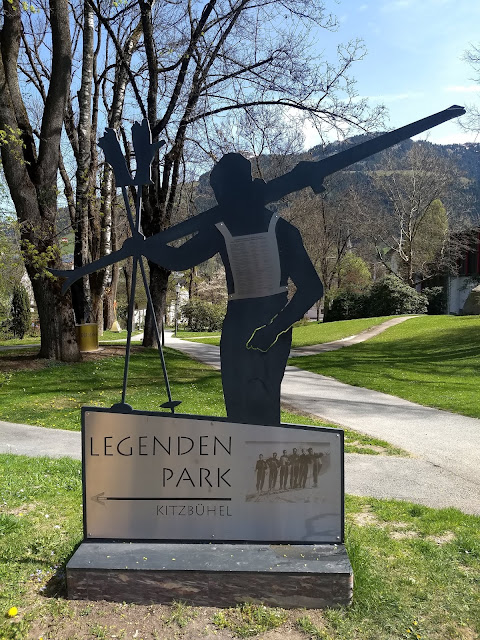 On the bib of the sculpture are the names of all the Olympic and World Championship medal winners from the Kitzbühler Ski Club. 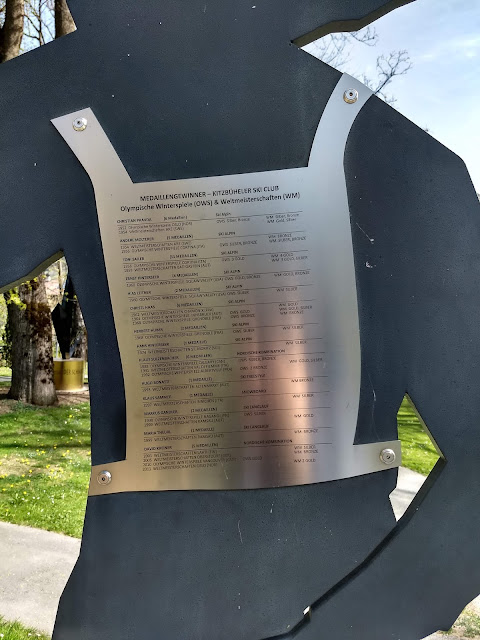 Amongst the names is Kitzbühl native Tony Sailer, who won 11 Olympic and World Championship medals, including three golds in the 1956 Olympics. 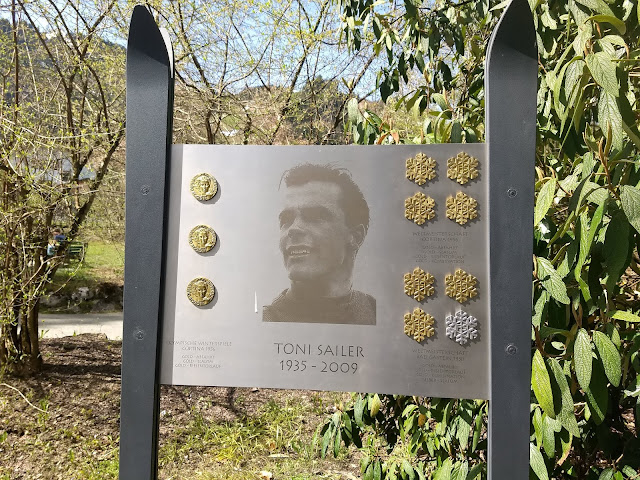 Sailer was also voted the greatest Austrian athlete of the 20th century.  He starred in a 1950s ski film known as Der Schwarze Blitz (the black flash). 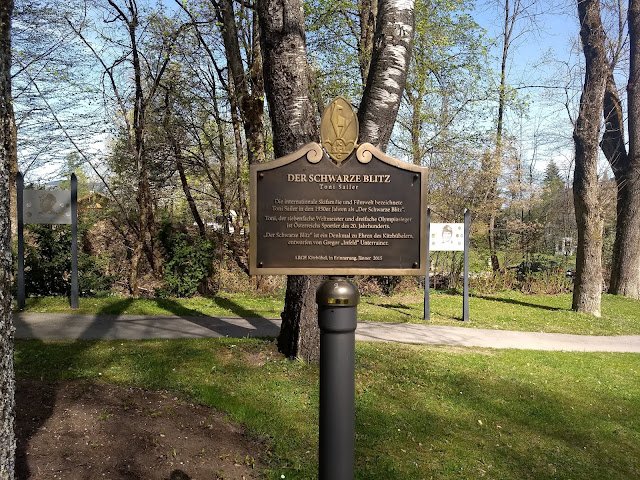 The name "World Cup" was first used in Kitzbühel. 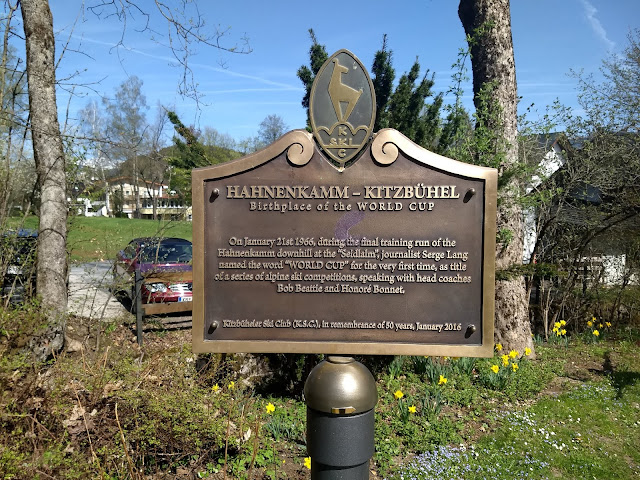 Surprisingly, the actual finish area for the Streif is gated off and inaccessible. 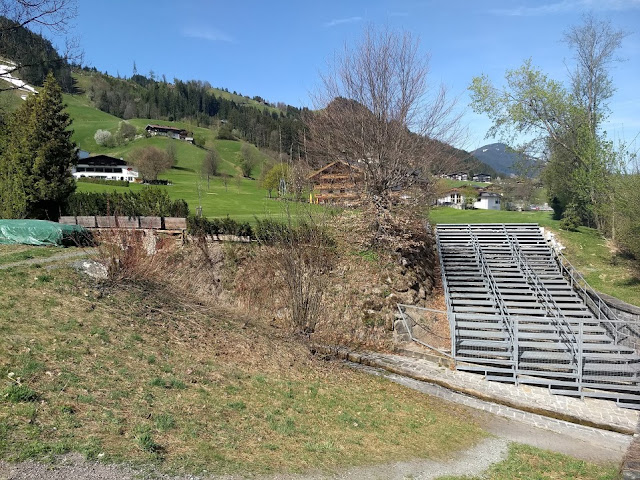 We walked around for quite a while looking for an easy access route that wasn't signed "Privat Gründstuck", but never found one.  The sign below will have to do. 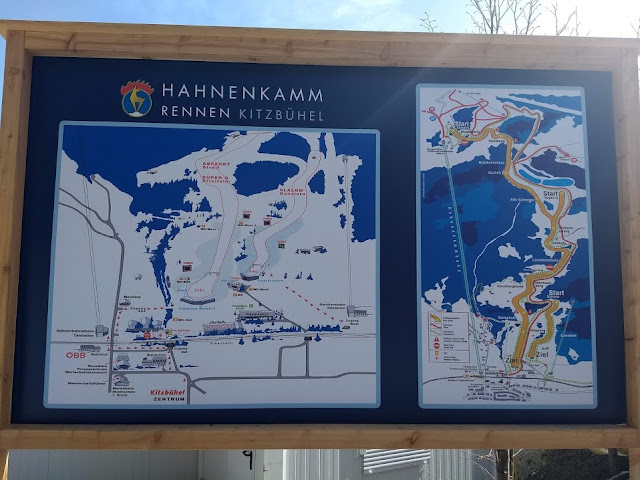 Finally, here's something to ponder the next time that you are stuck in traffic going up the Cottonwood Canyons.  There is a train station right next to the Hahnenkamm cable car.  I MEAN RIGHT NEXT TO IT.  30 meters away. 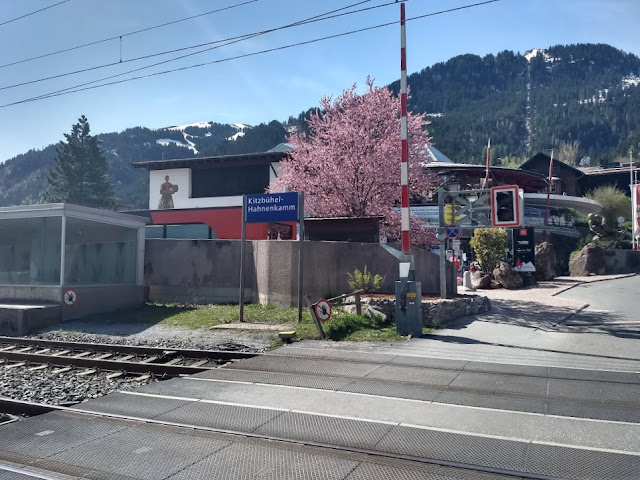 The Intercity (IC) train we took to Kitzbühel from Innsbruck doesn't stop here, but instead goes to the main train and bus station on the other side of town.  However, there are options that will plop you right here.