We've reached the half way point of my sabbatical in Austria and it seems like a good time to provide some weather perspectives on skiing in this part of the world.

Andrea and I have skied at a number of ski areas in western Austria including Ski Arlberg, Ischgl, Obergurgl/Hochgurgl, Stubai Gletscher, Kuhtai, Axamer Lizum, Patcherkofel, Glunguzer, Mutterer Alm, Götzens, and Schlick2000.  I've indicated these and two other large resorts, Sölden and Serfaus-Fiss-Ladis, on the images below, which illustrate the mean precipitation (water equivalent) during winter (December to February) and spring (March to May). 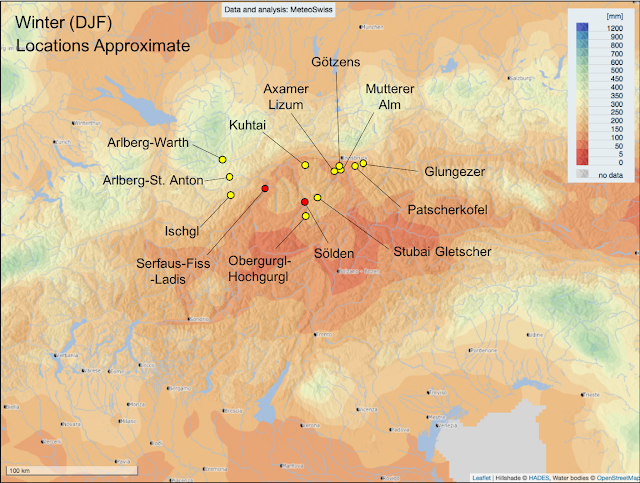 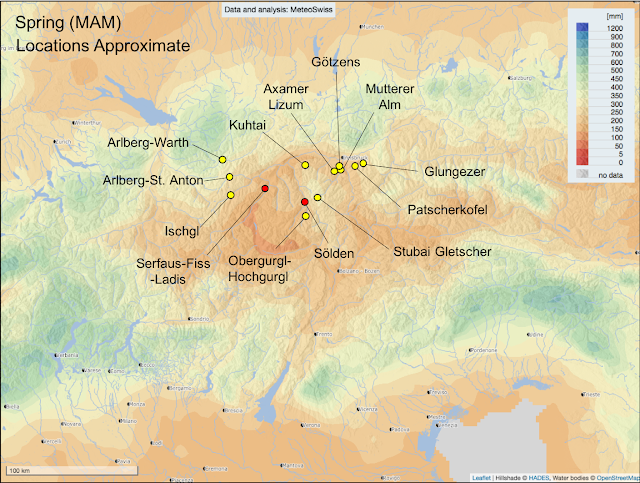 The greatest precipitation in winter is along the northern Alpine rim.  The combination of precipitation and sufficient altitude to frequently be above the snow line make the Arlberg ski region, which extends from St. Anton to Warth, the snowiest in western Austria during the ski season.  This region tends to do the best in situations when the flow is northwesterly or northerly and when cold fronts stall on the northern Alpine rim.

As one moves southward, precipitation and snowfall decrease.  Ischgl is a bit drier than St. Anton (although it has better aspects).   It is drier still in the Ötztal Alps that include Obergurgl-Hochgurgl and Sölden, as well as in the Stubai Alps at Stubai Gletscher.  However those resorts have abundant high-altitude terrain reaching near or above 3000 meters.  They tend to do a bit better in spring than winter and, given their close proximity to the Alpine divide, do better in westerly to southerly or even southeasterly flow storms, including those associated with cyclone development south of the Alps.

The area near Innsbruck is very interesting meteorologically as there is a very large gradient in precipitation and snowfall as one moves from the Nordkette (north chain) southward into the Inn Valley.  Although it snows a good deal in the Nordkette north of the Inn Valley, snowfall is much lower south of the Inn Valley where most of the Innsbruck ski areas lie (e.g., Axamer Lizum, Götzens, Mutterer Alm, Patscherkofel, Glungezer). Since our arrival in mid January, these areas have been quite dry, with the greatest snowfall produced during the passage of fronts and strong upper-level troughs when the synoptic forcing is strongest.  I suspect they can also do well in deep northwesterly to northerly flow storms in which the Inn and other valleys are filled with deep pools of cold air, which limits downsloping south of the Nordkette.

Most vacationers likely prefer to stay in one of the Alpine villages near a major ski area, but there is one major advantage of staying in Innsbruck, and that is the ability to go each day where the skiing is best.  This requires some travel and schlepping of gear.  One could rent a car or alternatively take transit.  My view is that the latter is best facilitated if you stay near the central train station (Hauptbahnhof) and catch the bus or train from there.  There is a bus that goes around to the hotels and shuttles people to the train station, but the timing is poor for those who like first tracks or first scratches, whatever the case may be.

There are a number of web sites and apps that provide schedule and connection information.  The best is probably vvt.at.  St. Anton is an easy connection as it is 67 minutes on the regional jet train from Innsbruck and the train station there drops you a 5 minute walk from the lifts.  Busses are available to Stubai Gletscher (75 min, about 7.40 euro round trip), Axamer Lizum (45 min, free), Kuhtai (70 min, free), and Mutterer Alm and Götzens (free, but I forget the time).  Other areas like Ischgl, Serfaus-Fiss-Ladis, Sölden, and Obergurgl-Hochgurgl require train and bus and take up to two hours.  When using the train, the regional jets are the fastest and often the best option even if you have to kill some time before the lifts open.

One can also use Innsbruck as a base for ski touring.  All of the ski areas allow uphilling if one just wants a workout or the avy hazard or visibility dictated caution.  It is possible to use transit to get to some trailheads, but it would be much easier to have a car.  Parking areas sometimes require payment at an automatic machine so it is good to have a stash of change just in case.  With a little sleuthing, one can find descriptions of tons of tours at bergfex.com.  Avalanche reports are available at http://avalanche.report, which covers the Tirol and East Tirol of Austria, and the South Tirol and Trentino of Italy.  Avalanche reports for the Vorarlberg, which would cover the backcountry of far western Austria including much of the Arlberg, are available at https://warnung.vorarlberg.at/vtgdb/dist/index.html#//lwd/lagebericht.html.
By Jim S Posted at 4/12/2019 02:40:00 AM