Forecast post mortem's are an essential part of forecasting.  Sometimes they are painful.  Today's is probably a 5 on a pain scale from 1-10.

Let's first review the precipitation forecast issued in yesterday's blog post (Expectations Through Tomorrow Afternoon).  For the 24-hour period ending at 5 PM today, I called for:

As of 4 PM (I'm writing this early, but it's pretty much over for precip through 5 PM except for maybe a snow shower or two) the totals since 5 PM yesterday are:

That's not too bad, but the low numbers at Snowbasin are a bit of a bummer for me and related to the more rapid cutoff of precipitation than expected following warm-frontal passage.  Even this morning, I didn't think we would shut down that abruptly.

Now, where things get ugly is in the central Wasatch.  Alta-Collins recorded only 0.46" of water equivalent (and 5 inches of snow) since 5 PM yesterday.  That's not even close to my forecast and I can find little solace from other observations in the central Wasatch.  Basically, the forecast was a bust in the central Wasatch.  While partly related to the rapid cutoff following warm-frontal passage, precipitation rates were overdone even before that occurred.  I've seen Alta get skunked from this flow direction before, so it was a possibility.  I just never know when one can count on it.

Now let's talk about the winds.  Here we also have a mixed bag.  Ogden Peak and Mount Baldy are the two main sites I look at for ridge-top winds.  Ogden Peak got raked pretty good, with a long period of gusts over 74 mph and a peak gust of 94 mph. 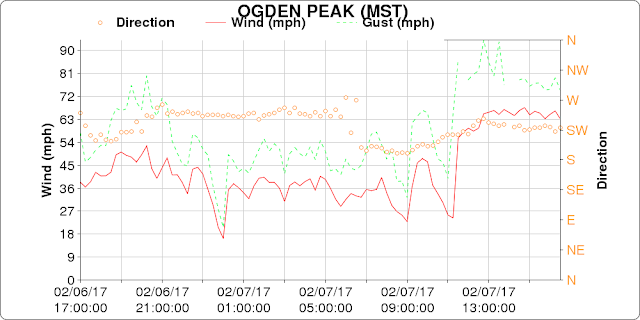 Impressive, but I must confess that I thought they would top 100 today.

Mt. Baldy blew hard, but not near the top wind gusts for that location, with a peak gust of 76 mph. 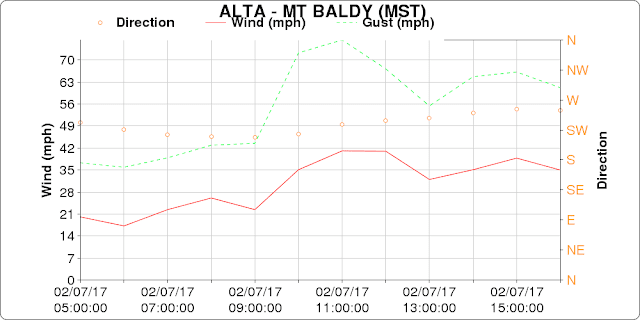 I can never remember if that site sees it's highest winds in S-SSW flow rather than SW-W.  I'll have to do some sleuthing for future use.

Some other maximum gusts reported to MesoWest in the Wasatch Range include 79 at Powder Mountain, 66 at Snowbasin-Wildcat, 65 at the top of Park City, 92 at Canyons 9990, and 62 at Deer Valley - Mt. Baldy, and 61 at the top of Alta's Collins chair.

These winds disrupted lift operations at several resorts (although Alta seemed to be running most of the day, although I didn't look in the later half of the afternoon), however, they were not as high as I thought they would be.