Weather, like politics, is local, and one often gets much different perspectives on the weather and the quality of a weather forecast depending on location.

I thought I'd go back and take a look at the NCAR ensemble forecasts for the 48 hour period ending 0000 UTC (5 PM MST) yesterday afternoon.  For simplicity, I just looked at the total precipitation.  The forecast for Powder Mountain, which is still closed due to avalanche hazard, was actually quite good, falling in the middle of the distribution. 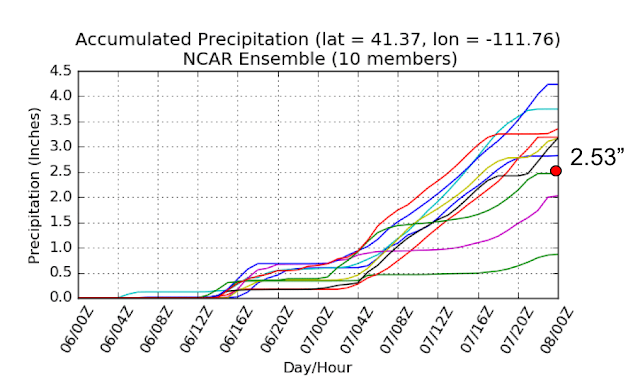 In contrast, the forecast for Alta-Collins was quite poor.  The lowest ensemble member called for over 1.0" of water equivalent, whereas 0.67" was observed. 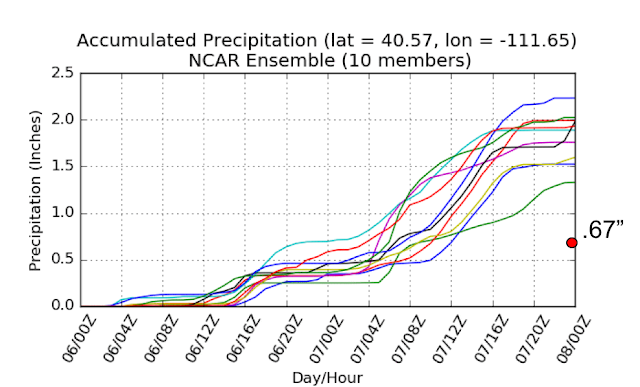 The results above are for undownscaled model guidance, so part of the problem with the ECMWF ensemble and GEFS reflects the poor terrain representation of those models.  On the other hand, we've done some evaluation of downscaled output from the GEFS and for short ranges, it still doesn't do as well as the NCAR ensemble.

The bottom line is that the NCAR ensemble remains an extremely valuable tool in the precipitation forecast toolbox.  The occasional miss is simply evidence that despite improving forecasts, we still have work to do.

Although Utah had strong mountain winds yesterday, it largely escaped any serious damage.  Jackson, Wyoming was not so lucky.  Here's a screen grab from today's JHMR Mountain Report.