One of the odder claims that I've seen in recent years is that March is Utah's snowiest month.  Ski Utah suggested this in their recent blog post March Always Delivers the Snow. 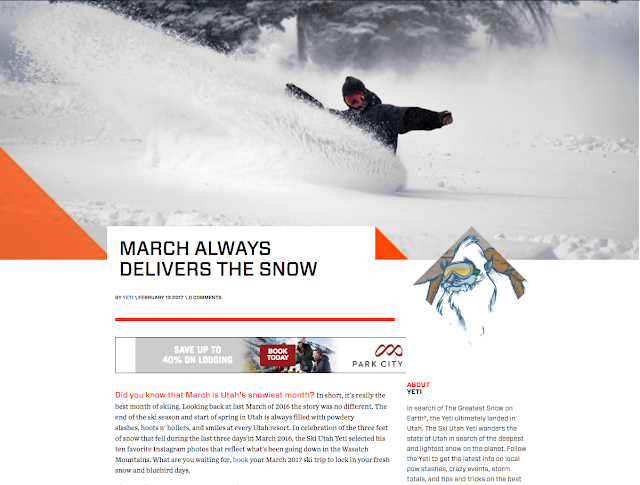 Certainly March can be a great month for skiing, especially if you like the combination of a deep snowpack, longer days, and warmer sun, but is it really the snowiest?

If one is talking about snowfall, that's debatable.  Below is the average total snowfall and average daily snowfall (in parentheses) by month at Alta based on data from the Western Region Climate Center.  Based on total snowfall, January is a bit ahead of March, although the difference is probably not statistically significant.  Based on average daily snowfall, a metric that I prefer because it adjusts for the number of days in each month, the snowiest months are January and February, although again, the difference relative to December and March is very small.

Numbers provided at the Utah Avalanche Center site for the Alta Guard station are somewhat different, but tell a similar tale.

This data shows that snowfall at high elevations in the central Wasatch is remarkably consistent during the months of December, January, February, and March.  Arguing that one of these months is snowier than the others is simply not justified based on long-term records.

Now perhaps there are other metrics that one might consider, such as the number of days with 10" storms.  I haven't bothered to dig into that, but in my view, that does not equate to "snowiest month," which most meteorologist would base on snowfall.

There is one other myth worth discussing here and that is the alleged January snowfall minimum.  Again, that does not show up in long-term records.  It could be that January features more variability from year to year, meaning a more feast or famine snow climate, but in terms of average snowfall, it is in a near dead heat with the other months.  I leave the issue of variability for others to investigate.  I need to get back to my day job.
By Jim S Posted at 2/28/2017 08:45:00 AM