Mother Nature flicked the switch this week, resulting in a truly remarkable transformation in the Salt Lake Valley.

Let me remind everyone where we were only 6 days ago on Friday, February 3rd.  We were at the tail end of a heinous inversion period, which finally cracked on that day.  Snow cover across the valley was fairly continuous and widespread.

Temperatures from January 24th through February 2nd featured below-average highs in the 20s and 30s.  However, February 3rd, with the cracking of the inversion, was the beginning of the end of the valley snowpack.  Since then, we have been well above average, climaxing with a high temperature of 61ºF yesterday. 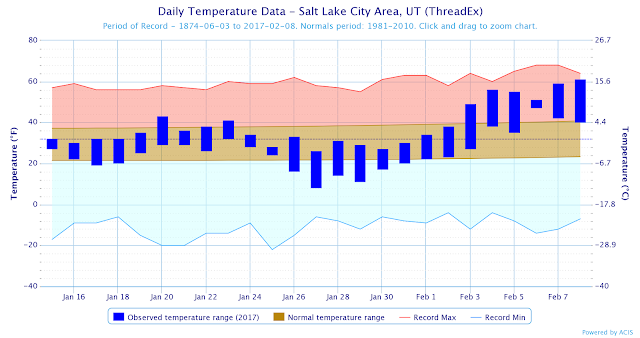 If skies were clear during that period, perhaps some valley or bench snow would have survived, at least in shady areas.  The sun angle remains fairly low and the amount of energy coming from the sun remains relatively limited for melting snow.

However, we experienced ideal "snow killer" weather conditions with high humidity, rain, and frequent cloud cover.  This provides lots of energy for melting snow, especially from condensation and long-wave radiation.  Condensation and long-wave radiation are largely equal-opportunity offenders.  They don't care what time of day it is or what the aspect is.  When conditions are right, they melt snow 24/7 and on all aspects.

So, let's fast forward to today.  As I departed for the U from my house in the upper Avenues, I found little snow except in areas where it had been piled deep.  The snow level on the Wasatch Range, despite the fact that one spies primarily north aspects from the upper Avenues, was clearly at or above the upper benches. 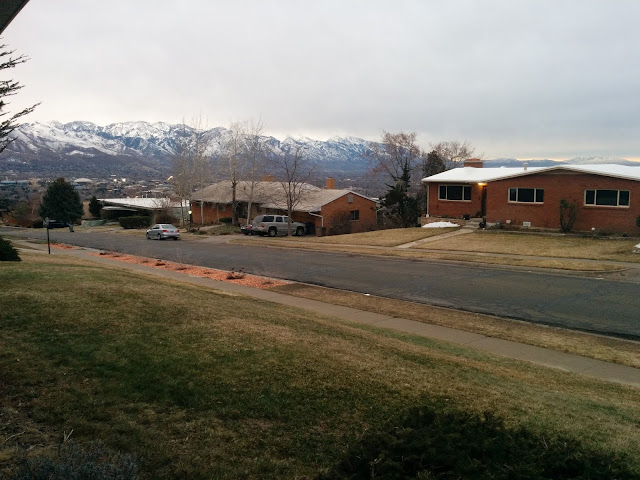 The forecast highs for today in the Salt Lake Valley are in the low-to-mid 60s.  We currently sit at 55ºF at the Salt Lake International Airport.  The average high for the day is 41ºF, with a record of 62ºF, although the record for tomorrow is 68ºF (set in 1951), illustrating that astoundingly high temperatures can occur in mid February.

Mountain temperatures are also out on the limb as it is currently 43ºF at the base of Alta and 35ºF at the Alta-Collins site (~9700 feet).  I suspect some rain was felt at the base this morning.  Further to the north, precipitation has been a bit steadier and drops on the Snowbasin snowstake suggest rain there at 8000 ft where the Boardwalk observing site is reporting a temperature of 39ºF and a dewpoint of 35ºF.

And if you think it's warm this morning, wait until this afternoon when the 6Z NAM forecasts 700-mb (10,000 ft) temperatures to max out at an astounding 4.3ºC at 2 PM.  That's about 4ºC warmer than observed in the morning sounding from the airport.  Keep in mind that at 700-mb, this is the period of the lowest record maxima, as illustrated by the red line below, so 4ºC represents an exceptionally high 700-mb temperature for February.

The good news is that temperatures will slowly decrease from later today to Saturday morning, with a slow moving cold front bringing a right-side up snowfall tomorrow and tomorrow night for the weekend warriors.
By Jim S Posted at 2/09/2017 08:59:00 AM