Yes, I know you are probably interested in the President's Day Weekend forecast, but you can get that elsewhere.  We try to look at things differently here at the Wasatch Weather Weenies.  Thus, we're going to Mexico, with a return trip to California and Utah.

Why?  An exceptionally deep upper-level trough will be impacting northwest Mexico Friday and Saturday as part of the storm system that is also sweeping across the western United States.  The GFS forecast loop below shows the band of heavy precipitation sweeping through the Mexican states of Baja California, Baja California Sur, Sonora, and Sinaloa with the 500-mb trough.

That 500-mb trough is exceptionally deep for such a low latitude.  As it sweeps over Cabo San Lucas, the 500-mb heights are lower than anything observed during this 3-week period in the Climate Forecast System Reanalysis record for 1979-2009.  Basically, the jet stream has decided its had enough of the cold mid latitudes and is dipping down and flirting with the tropics. 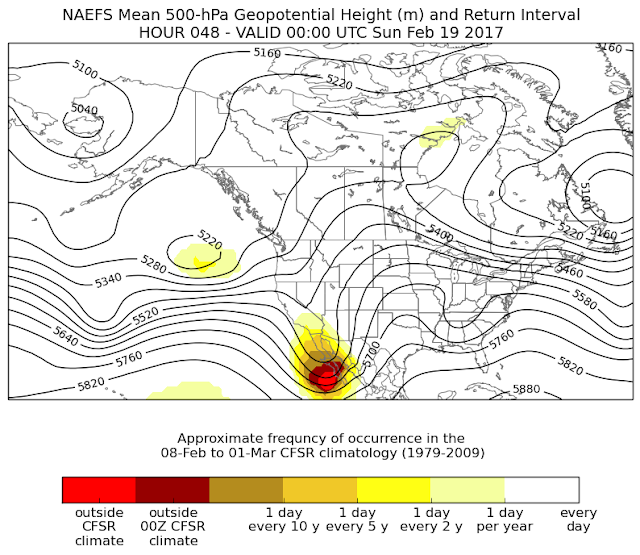 Prior to that, as the upper-level trough moves down the California coast, it is accompanied by a surface cyclone with unusually low sea level pressures.  The NAM forecast images below, valid at 5 PM MST this afternoon, 5 AM tomorrow morning, and 5 PM tomorrow afternoon, show the cyclone directly down the California coast.  The Santa Ynez Mountains look to get a pounding today as they are oriented perpendicular to the landfalling atmospheric river ahead of the low center.

Utah will see warm-frontal precipitation develop late today.  If you look at the top panel above,  you will see low-level southeasterly flow.  This is a situation where Deer Valley and PCMR will likely see the most precipitation.  Brighton often does well and sometimes the Supreme area of Alta.  Lesser amounts typically as one moves westward.  Indeed, even the 12-km NAM produced a 3-h precipitation forecast for the period ending at 0600 UTC (11 PM MST) tonight that has more precipitation east of Alta (red dot) than west.

The NCAR ensemble picks up on this a bit.  Note the shift to slightly higher values from Alta-Collins (top) to Brighton (bottom, note scale change). 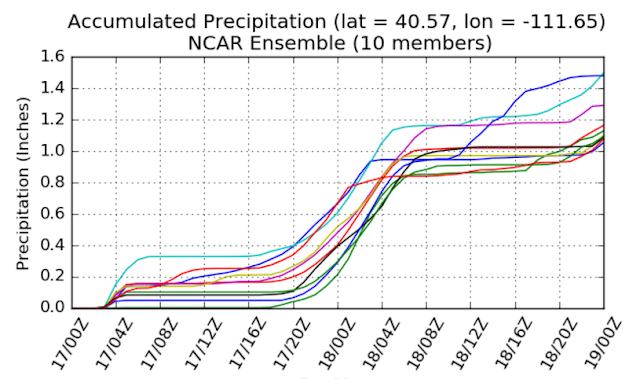 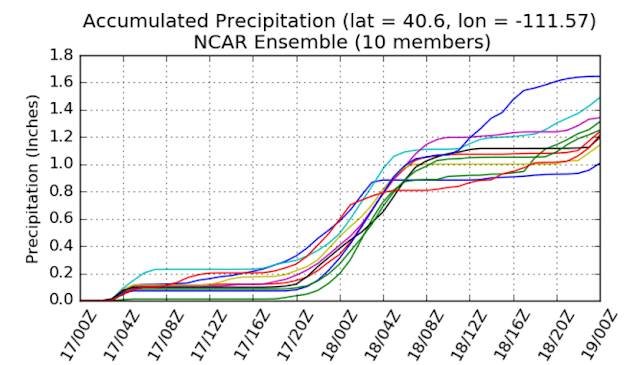 The change is not large, but these two locations are separated by only a couple of grid points, so that's pretty good for a model with 3-km grid spacing.

The latest 12Z NAM is putting out about 0.35 inches of water through tomorrow morning at Alta.  I've been burned more times than I'd like to admit in these warm frontal events as they sometimes underproduce, especially during their early stages.  Thus, I'm thinking of something like 2-5 inches of snow for Alta and Snowbird and 4-8 inches for upper elevation areas along and east of the Wasatch Crest, including Deer Valley, through 8 AM tomorrow morning.  Snow levels could flirt with the base of PCMR this afternoon, but otherwise should remain at or below 7000 feet.