February Is the New April

Today's ski tour was a bit like one you might experience in April.  Snow levels around 7000 feet (but higher overnight).  Wet sponge conditions in which you simultaneously get wet from the inside out and from the outside in.  Decent, creamy conditions above 9000 feet, but snow becoming increasingly cruddy and shallow with decreasing altitude below that point.  Then one returns home and it looks like April.  Warm and partly sunny with little low-elevation snowpack. 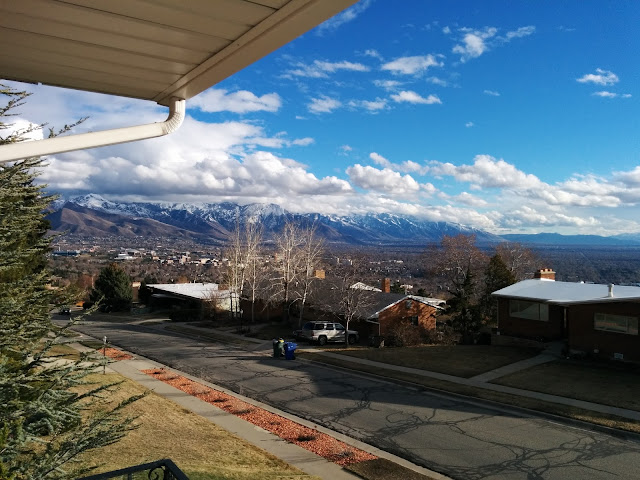 From a snowpack standpoint, this week was one in which the rich (high altitudes) get richer and the poor (low altitudes) get poorer.  In fact, traveling up and down Big Cottonwood Canyon today it was clear that this week was a total and complete disaster for the snowpack below about 8000 feet and especially below 7000 feet.  The snow losses below 7000 feet were visually staggering (I didn't take any photos) and where there was snow, it looked water logged and tired.

I really wish we had a mid-elevation (~7000 foot) snow observing site in the central Wasatch so that we could place events like this into historical context, but we don't.  Not only do we not have a snowpack history at that elevation, but we aren't collecting observations at such elevations today.  There is a SNOTEL observing site at 6000 feet in the North Ogden Valley (Ben Lomond Trail), but the microclimate there is so far removed from the central Wasatch that it is not really representative.

The run of unseasonable warmth is not over yet and will actually be worse tomorrow, when 700-mb temperatures will peak at 0C, through Tuesday morning (0.7C) afterwhich we'll finally start to cool things off.  The mild temperatures are particularly evident in the upper left panel below, showing our estimated temperatures for Mt. Baldy (11,000 feet) based on the NAM forecast.  How about several degrees warming from where we sit at present (the forecast is pretty close to the current observation of 19F this afternoon) through noon tomorrow and then a subsequent peak early Tuesday morning.

The one good thing is that the GFS is advertising a return to cooler weather midweek.  Unfortunately, there's no replacing the low- and mid-elevation snow that's been lost this week.
By Jim S Posted at 2/19/2017 05:02:00 PM