Why You Are Getting Bad Air Quality Information

There is a fundamental problem with the air quality information being provided by the Utah Division of Air Quality and the EPA through it's airnow.gov web site.

It is based on a single sensor at Hawthorne Elementary School.

Unfortunately, there are times, many times, where the PM2.5 concentrations at Hawthorne simply are not representative of the valley, and today is a prime example.

I took the photo below at 12:23 PM MST from the Natural History Museum of Utah, looking west across the Salt Lake Valley toward the Oquirrh Moutains.  At that time, the University of Utah was in the clear, as was a good fraction of the Salt Lake Valley.  However, strongly polluted air remained over the Great Salt Lake and was pushing southward, with pronounced "nose of gunk" at the lake-breeze front. 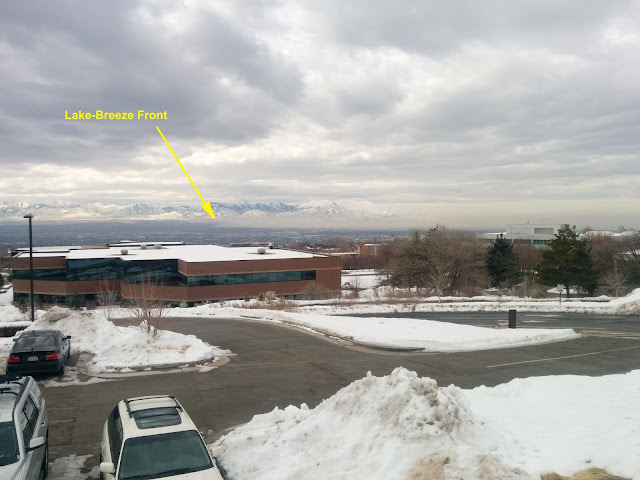 At 1:38 PM, the Utah Division of Air Quality reported "good" air quality for Salt Lake County, with a PM2.5 concentration of only 10.8 ug/m3.

Similarly, if you are getting air quality information from airnow.gov, you are seeing an analysis or forecast based on a small number of stations and really designed for regional scale guidance. It is not necessarily representative of the air quality in your neighborhood.
The University of Utah operates a PM2.5 sampler at Neil Armstrong Academy in West Valley City and within the pollution pictured in the photo above.  As can clearly be seen, except for a brief period this morning from about 6-8 AM when they were in the clear, PM2.5 levels have been in the unhealthy for sensitive groups (35.5–55.4 ug/m3) or unhealthy (>55.5 ug/m3) categories for much of the day.

Basically, people are going to the DAQ web site and being told the air quality is good, when clearly that is not the case for some residents of the valley.

Of all the low-hanging fruit with regards to addressing air quality in the Salt Lake Valley, this might be the lowest.  Yes, it would take money to expand the real-time air quality network, both in terms of infrastructure costs and maintenance costs, but it would pay immediate dividends in providing residents with more representative information concerning the air quality in their area.  This is an investment that could be made today that would have an immediate impact on public decision making.

People have asked me about the purple air network, a citizen-led air quality monitoring effort.  Kudos to them as those instruments could prove useful.  However, they measure the number of particles rather than mass, and the assumptions used to convert from particles to mass can introduce errors.  My impression from looking at the data last inversion season was that most of the time the estimated values were too high.  However, the spatial distribution and temporal trends from the sensors may be useful and there is probably some potential for calibration (and perhaps people are already doing this).

The bottom line is that the Wasatch Front needs better real-time information on the spatial distribution of air quality beyond a single measurement in each county.  There's little reason why with a little political will this couldn't be done for next inversion season.

Here's a paper evaluating the sensor used for the Purple-Air Network.  It may be paywalled off campus.