Catching Up on Climate Change

Thanks to world travels, inversions and air pollution, and active storm cycles, I haven't had a chance to throw some climate tidbits at you in some time.  Here goes.

I'm late to the party on this one and you probably knew this already, but 2016 was the warmest calendar year on record, inching out 2015.  Collectively, those two years easily represent a new "high" for the planet, well above anything else in the instrumented record.
Tough to say if 2017 will set another record.  I wouldn't be surprised if we pushed it a bit higher, or if we settled back a bit as has often happened during the long-term warming trend over the past few decades.  If the latter occurs, don't fall talk of a global warming pause or hiatus.  The train has left the station and we're on our way to a warmer future.

No Record for Utah

The statewide average temperature in 2016 for Utah was in rare territory, ranking as the 6th warmest in the instrumented record, but still lagged behind the remarkable 1934.

January 2017 Close to the 20th Century Average for Utah

January felt a bit more like an old-time winter this year and the data bears that out as the statewide average temperature was nearly dead on the 20th century mean.

The National Snow and Ice Data Center reported last week that record low Arctic ice extents have been observed from October through January. 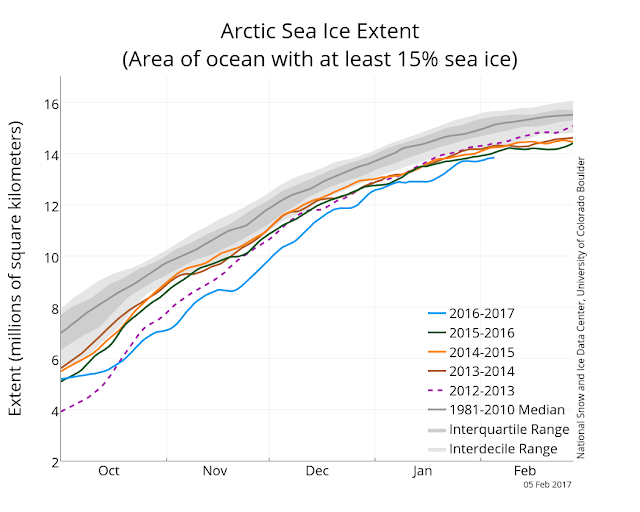