Central Wasatch Get No Love and Neither Should Icon-Based Forecasts

It's been nearly a total skunking so far for the central Wasatch in this storm.  Others have been blessed with the white stuff.  Mammoth Mountain apparently picked up 30 inches.  In northern Nevada, the Pole Creek Ranger Station SNOTEL near Jarbidge reports 4.2 inches of water equivalent in the snowpack.  Colorado is getting some today and tonight.  My twitter feed is abuzz with photos of snow from elsewhere in the west.  Mother Nature is giving us no love.  Perhaps she's upset that Ralph Becker, an avid backcountry skier, did not win the Salt Lake City mayoral election?

The hype for the next major storm has already begun as I saw it announced on the news last night.  It was done in the usual way.  The weather broadcaster says something like, "looks like a storm next Tuesday and the models are advertising a good one," with the icon for next Tuesday showing a snowflake and a maximum and minimum temperature.

Icon-based forecasts are convenient and they probably poll well in surveys of television viewers, but they are a terrible way to communicate weather forecast uncertainty and possibilities, as we've discussed previously (see Ten-Day Icon Based Forecasts Are Bogus).  In addition, although our medium-range forecast ensembles are becoming better and better at forecasting large-scale circulation changes a week in advance, snow in northern Utah is critically dependent on small-scale forecast details that are much less predictable at such lead times.

Let's take the current "storm" as an example.  We had a pretty good idea a week ago that a weather system would be moving into the western United States, with a major change in temperature.  However, there was a large range of precipitation outcomes forecast by the various ensembles, including one member that produced no precipitation.  Thus, there was a huge range of possible forecast outcomes from no precipitation to nearly 4 inches of water equivalent at Alta-Collins.  It was more likely than not that we would see a significant storm, but the odds of a skunking like we got were not zero. 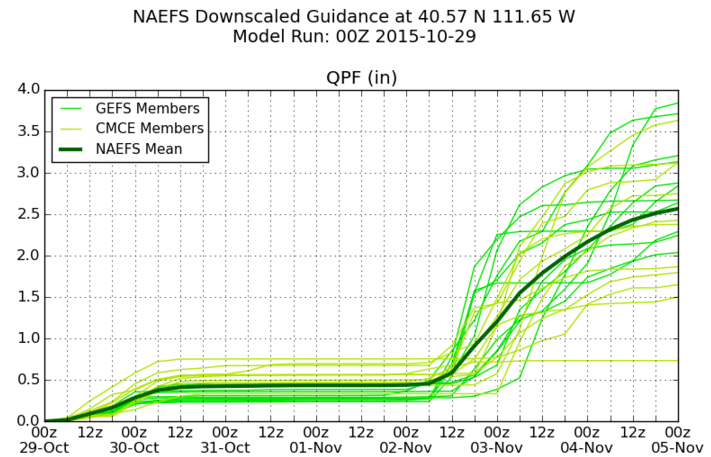 So, let's once again look at the 7-day forecast for Alta-Collins.  Note how when we get out to Tuesday (10 November), we see a wide range of outcomes.  There is one ensemble member that produces nothing, most cluster between 0.75 and 1.6 inches, and one member that goes bigger. 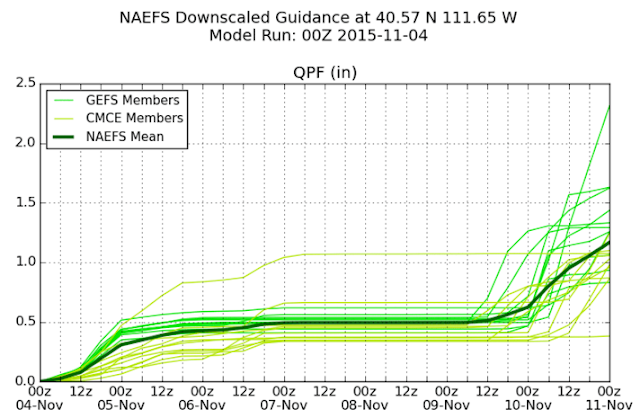 There's little point at this time in getting all excited about this storm.  It is a synoptic possibility, not a forecast certainty.   There is a huge range of possible outcomes because of uncertainty in the location and strength of large-scale weather systems, as well as the limited predictability of smaller-scale precipitation processes that generate snowfall over northern Utah and in the Wasatch Mountains.

I'm not saying there won't be a storm in the Wasatch next Tuesday.  What I am saying is that we know right now that there is a large range of possible outcomes and my profession can do a better job forecasting and communicating the range of those outcomes and their probabilities.
By Jim S Posted at 11/04/2015 08:46:00 AM