If I had my choice, I'd take a dry October followed by a really big storm cycle in November to kick off the ski season.  We had the former, but we've yet to really get walloped this November.  Instead, we've had three storms that collectively have given us about as close to a run-of-the-mill snowpack as we can have, and given what we dealt with last year, I ain't complaining.

Here's the latest from three SNOTEL sites in the central Wasatch (I skip Brighton, which I've always considered problematic).  Thaynes Canyon is running at 80% of median (median being the value that splits the upper and lower halves of past snowpacks), Mill-D North is right on median, and Snowbird is just a shade behind.  At Snowbird, the data does not include yesterday, however, which would probably push it pretty close to median. 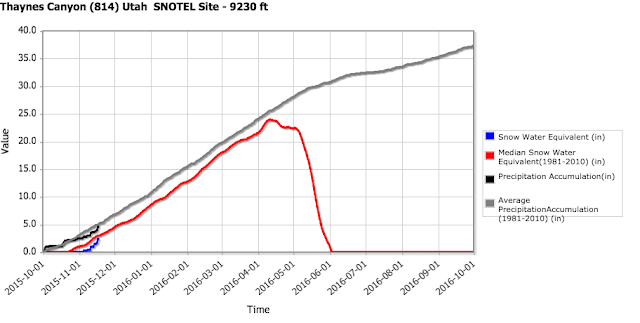 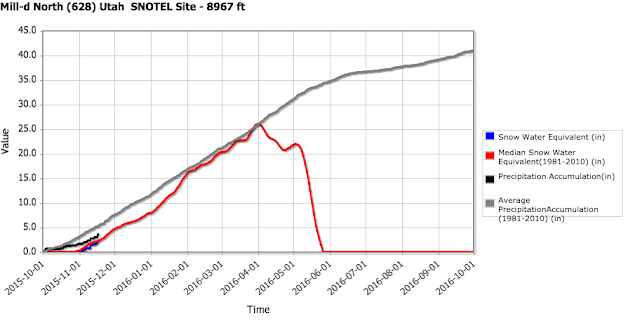 What will the winter bring?  Jason Samenow posted a nice article on Capital Weather Gang yesterday discussing how El Nino is now in uncharted territory.  The departure from average temperature in the central Pacific is the highest recorded.  Projections from the NCEP Climate Forecast System are still producing an average solution calling for a wet southwest and a dry northwest interior.  An example of the average of a subset of those projections for Dec-Feb and Jan-Mar is below, but other subsets show a similar distribution.  Northern Utah, of course, is in the transition zone.
That doesn't mean we will have an average year, but simply that the dice aren't really loaded for us one way or the other, consistent with an analysis of past El Nino events.  If that doesn't do it for you, be sure to consult the Wasatch Weather Weenies survival guide to El Nino.
By Jim S Posted at 11/17/2015 08:27:00 AM