Although I'd rather talk about snow, Mother Nature just keeps giving interesting weather and I experienced the full force of it on my pre-Turkey hike this morning.

While hiking in the Avenues Foothills, I experienced increasingly strong, cold easterly flow as I hiked eastward and upward to the top of the Avenues Twin.  It was absolutely frigid on top, with screaming easterlies of perhaps 25–30 mph.  I wasn't dressed for that!

Observations from the University of Utah show the development of the easterlies this morning with gusts reaching about 40 mph around 11 am.

As is often the case, there was a well developed "Sandy Eddy" with the easterly flow turning cyclonically (counterclockwise) and becoming northwesterly or westerly flow over the Salt Lake Valley and upslope flow over the Wasatch Range near the Cottonwood Canyons.

The Sandy Eddy has a very apparent signature when viewed from the Avenues foothills.  There is typically very clear air in the easterly flow over the northern Salt Lake Valley, but haze where the flow is northwesterly or westerly and impinging on the Wasatch.  I'm not sure if the haze reflects pollution, higher relative humidity in the upslope flow (which leads to the formation of haze particles), or some combination of those two factors.  Today there were also some small cumulus forming in that area. 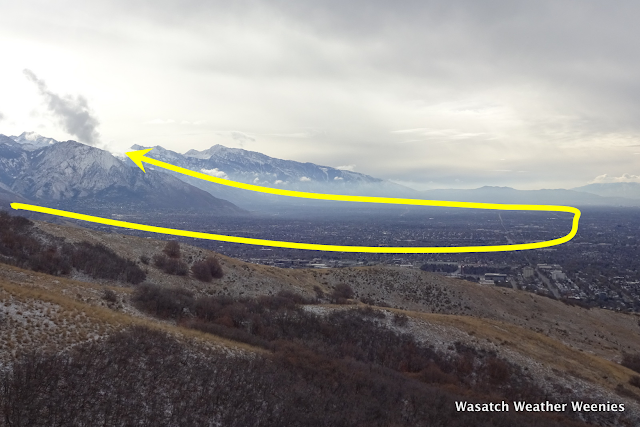 As I looked westward toward the airport, I also saw evidence of a pronounced hydraulic jump where the flow separates from the surface and rises rapidly.  An example of such a jump is provided by the figure below, which is based on an idealized numerical simulation.

Sometimes there is an opposing return flow downstream of the jump and that was indeed the case today as if you look at the MesoWest plot above the flow at the airport was northwesterly even as the winds were cranking out of the east at the University of Utah.

Cumulus clouds just near downtown provided evidence of the strong ascent associated with the hydraulic jump this morning. 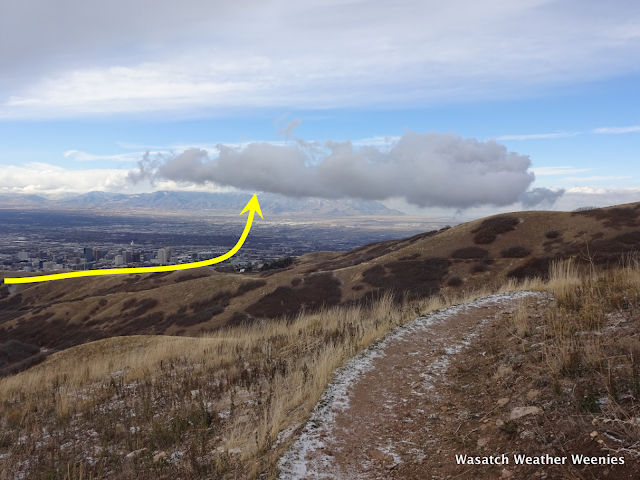 This cumulus cloud and scd clouds extended northward just west of the Wasatch foothills (photo below taken ~15 min earlier than the one above).