Predictability describes the extent to which the weather or an aspect of the weather can be predicted with existing tools and knowledge.  Its close partner is uncertainty, a measure of the ambiguity or lack of precision in a forecast. In any given forecast, some aspects can be relatively predictable, while  others are less predictable.  A good example is the forecast for this Thanksgiving week.

Over the next few days, a Rossby wave breaking event will occur over the north Pacific and western North America, as can be seen in the GFS dynamic tropopause (jet-stream level) loop below.  The wave breaking features the amplification of the high-amplitude ridge over the Gulf of Alaska and northwest North America and the near simultaneous amplification of the upper level trough over the western United States.

There is very strong agreement amongst the models and ensembles on this large-scale evolution.  Below are forecasts from several members of the Global Ensemble Forecast System (GEFS) valid Friday afternoon and they all show a large-scale ridge over western Canada and a trough over the western US.

Based on the correspondence between these models, the shift in the large-scale pattern over the western U.S. is relatively predictable with limited uncertainty.  It's going to happen.

Precipitation, however, is another story.  There are differences in the strength and location of the trough and in turn the areas of precipitation pinwheeling around it, and these differences matter a lot for local accumulations.  If we look at our downscaled accumulated precipitation plumes from the North American Ensemble Forecast System (NAEFS), which includes the GEFS and ensembles from the Canadian model), we see huge spread in the forecasts for Alta-Collins.  Through 1200 UTC 27 Nov (Friday morning, when hoards of skiers will be looking for snow), accumulations range from as little as 0.1" of water equivalent to as much as 2.4".  This about as much spread as I've seen in these forecasts since we started producing them last year.  Usually, there is stronger clustering.  Thus, the precipitation predictability for any given location is low and the uncertainty high. 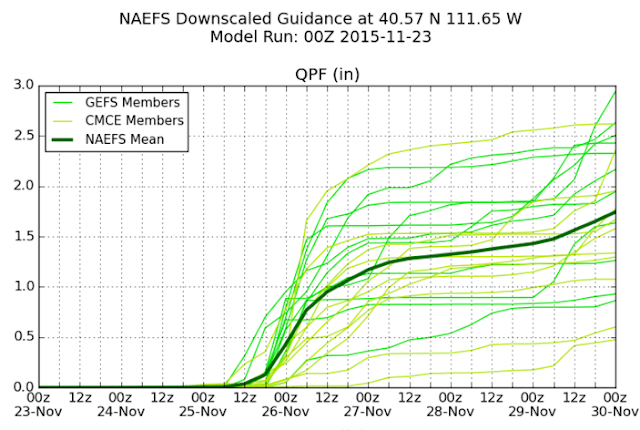 The meat of the precipitation plumes lie in the range from about 0.8" to 1.6" through Friday morning (most of that precipitation falls late Wednesday or Wednesday night).  If you need a most likely scenario, that's it.  If I had to pick a most likely side that an alternative result could fall on, it would be the low side (sorry, but regular readers of this column know that I'm a realistic pessimist and like to be surprised by more snow than I expected).

The bottom line is if you are traveling Wednesday or Thursday, keep a close eye on the weather forecast and be prepared for the possibility of winter driving conditions.
By Jim S Posted at 11/23/2015 09:28:00 AM