The Trough a Week Club Continues to Deliver

We have been in quite a cycle the past month with a trough passing through northern Utah early in the work week each of the past four weeks.  Each trough is similar in that it brings a temperature drop, followed by a recovery.  Check out the temperature ranges below for each day in October and November.  After a long stretch of quiescent weather in October, we had a trough passage and associated temperature drop around Oct 29, Nov 4, Nov 10, and Nov 16.

The trough of the week club will continue to deliver this week, bringing the warm before the storm through Tuesday,

and then a return to more winter-like temperatures on Wednesday.

As was the case with the previous storms, we're dealing with a crap shoot for what will happen for mountain and possibly valley snow.  Contrasts in the track, strength, and shape of the trough can make a big difference for precipitation around here, so I'm still taking a wait and see approach until we get a big closer to the event.  The uncertainty is reflected in the large spread being produced by our downscaled North American Ensemble Forecast System (NAEFS) guidance for Alta, which shows members producing from as little as about 0.4" of water to as much as 2.5". 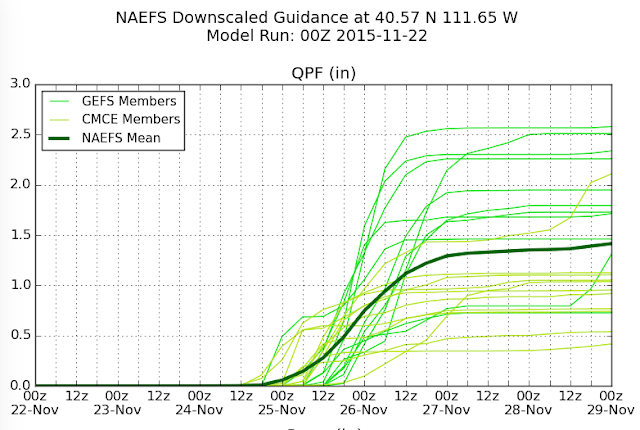 It would be great to get the latter.  A once a week storm is better than nothing, but we remain on the shy of what I'll call "real" skiing and the stretches of warmer, sunnier weather are hell on the south facing aspects.  On the plus side, the regular storms keep the valley stirred up and the inversion at bay.
By Jim S Posted at 11/22/2015 07:26:00 AM