With an average temperature of 60.5ºF, October was the warmest on record in Salt Lake City.

As usual, there were a number of interesting talks presented at yesterday's Utah Snow and Avalanche Workshop.  Every year I find it helpful and sobering to see talks given by those involved in avalanche incidents and rescues, as well as talks highlighting just how bad we are as humans at objectively recognizing hazards and making good decisions in the backcountry.  Blase Reardon's talk on developing expert intuition in the backcountry was especially good as it discussed how most of the feedback we get in the backcountry creates an illusion of skill.  Although there were some technical difficulties during the presentation, check it out when the UAC posts it online in a couple of weeks.

We discussed some of the uncertainties in the anticipated storm for early this coming week a couple of days ago (A Splitting Storm, But Early Next Week Things Get Interesting).  The pattern remains quite chaotic and we're still seeing quite a bit of spread in the model forecasts.  Our downscaled NAEFS product is showing anywhere from 0.7 to 3.5 inches of water amongst the various members at Alta Collins, for example. 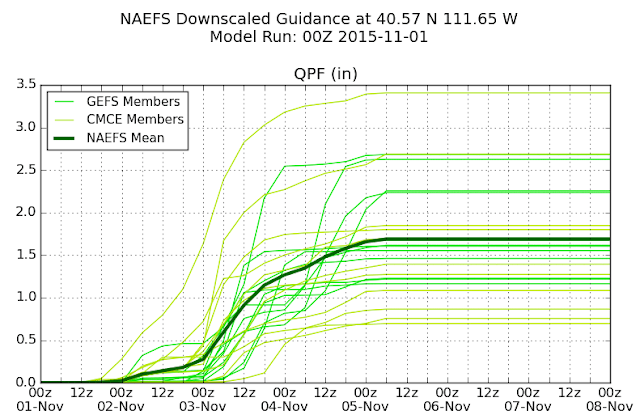 A quick look at the Euro shows quite a bit of variability as well.  Looks like we'll get something, but the possibilities by Thursday ranges anywhere from ski purgatory (snow, but not really enough to ski) to early-season freshies.

Speaking of this Thursday, I'll be making the drive to Logan and giving a talk on the Secrets of the Greatest Snow on Earth at the Utah State University Merrill-Cazier Library at 7 PM in room 101.  The lecture is free and open to all, so this is a good opportunity for Cache Valley residents to learn about Wasatch weather and climate.  More info here.
By Jim S Posted at 11/01/2015 08:20:00 AM