On average, the lake-effect snow belts of the eastern United States receive some of the driest snow in the United States, comparable to that found in the interior west, including Utah and Colorado.

Although we have a bunch of fancy automated instruments to measure snow, I'm partial to making snow depth, snow-water equivalent (SWE - the amount of water in the snow), and water content measurements by hand.  The technique is old school, but more reliable than automated measurements.  It involves placing out a white snowboard, letting the snow accumulate, and then making measurements with a ruler.

That gives us the snow depth for whatever period during which the snow accumulates on the board.  We then take a core of that snow and weigh it to determine the SWE.  Dividing the SWE by the snow depth gives you the water content.

Using this approach we typically measure the snow depth, SWE, and water content every 6 hours, although we sometimes go 12 hours overnight when the snowfall isn't very large (as was the case last night).  We also do a 24-hour measurement on a separate board each morning.

Over the past 24 hours, we've received 13 cm (about 5 inches) of snow with a water content of only 4%.  That's really dry snow.  There are two reasons why it is so dry.  The first is the type of snowflakes that are falling.  As shown in the photo below, we've observed a mixture of crystal types.  The branchy tree-like flakes are dendrites.  When these crystals entwine to make bigger flakes, which you can see a few of in the photo below, we call them dendritic aggregates.  There are also some smaller more rounded crystals. 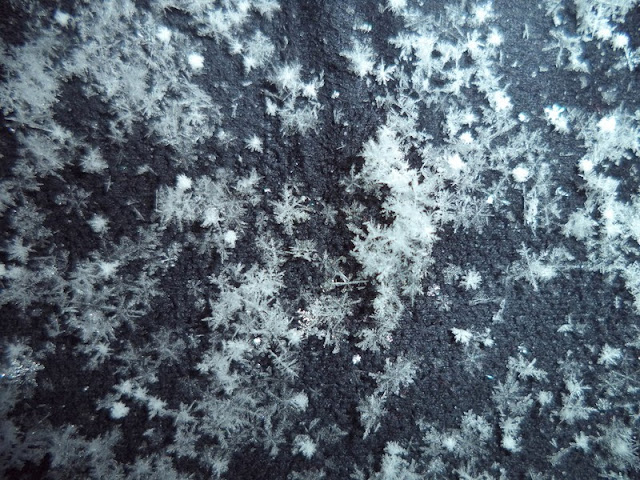 Dendrites and dendritic aggregates are a key ingredient in wild snow because all those tree-like arms create lots of air pockets as the flakes stake up on top of each other.

The second reason is a lack of wind.  Wind tends to bash and break up dendrites, destroying all those air pockets.  So, if you want wild snow, you need calm or near calm conditions so the dendrites can fall unmolested and stack up like a house of cards.

Five inches isn't a lot of snow, but it's added just enough to the base that we will be skiing later today.  Its also served as an appetizer for the main course that will be coming this week when it appears we will need to get out our meter stick for measurements.
By Jim S Posted at 12/08/2013 06:19:00 AM