Many of my regular blog readers who have a great interest in Wasatch weather are probably wondering if I have gone off the deep end given all the posts I have been doing from northern New York.  What can I say.  We're having a great time.  Yeah, there's some good weather in northern Utah right now, but my mind is still locked on the incredible storms we observed over the past couple of weeks on the Tug.  So, let's have a comparison or, dare I say, a cage match.  This will also introduce new upstate NY readers to the remarkable snow climate of the Wasatch Mountains.

The Wasatch Mountains extend roughly north-south through northern Utah with the highest and broadest portion of the range rising up to 7000 vertical feet above the Salt Lake Valley to the southeast of the Great Salt Lake.  This high portion of the Wasatch Mountains, which contains many world-famous ski resorts such as Alta, Snowbird, Solitude, Brighton, Canyons, Park City, an Deer Valley, is called the central Wasatch.

The Tug Hill Plateau rises very gradually from the shores of Lake Ontario (~250 feet above sea level) to a maximum elevation of about 2000 feet.  Slopes on most of the Tug are pretty gradual and do not support downhill skiing.  The exception is the eastern side which drops sharply to the Black River Valley.  Snow Ridge ski area on the eastern side has a vertical drop of 450 feet.

Very few stations have reported snowfall observations over an extended period on the Tug Hill Plateau, so to get some idea of the distribution of snow in the area for our field program, I concentrated on a three year period with the greatest coverage of observations reported to the Buffalo, NY National Wather Service Office.  Three years is too short for a climatology, but I suspect that these numbers are probably within 20% of the long term average at most locations.  Here you can see why we were so keen to put our instruments up at North Redfield, which had an average annual snowfall during this period of 254 inches, followed by a 236 inch average in North Osceola.  Note that neither of these sites are in the center of the upper Tug, so snowfall amounts in that area remain undocumented.  I suspect that if one wants to argue for the snowiest location in the east, that some of the higher peaks of Vermont, Maine, and New Hampshire, or locations on the Keweenaw Peninsula might top the snowiest portion of the Tug, but in all likelihood the Tug Hill Plateau has the largest continuous area with an average snowfall of more than 200 inches in the eastern United States. 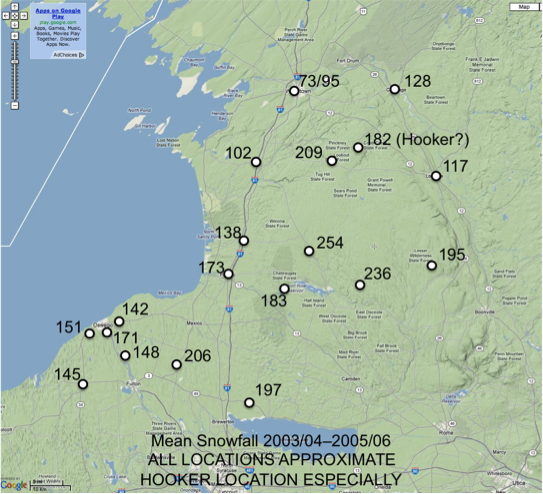 Finally, we could do a comparison of lake-effect in the two regions.  The Tug wins hands down here as most of the snow that falls in the Wasatch is of the non-lake-effect variety.  Based on our estimates, I would say something like 25-50 inches a year (on average) in the Wasatch is lake effect, whereas a big chunk of the Tug snowfall is lake effect.

Utah's 24-hour snowfall record is also an impressive 55.5 inches, set at Alta Ski Area, which ain't too shabby.  But sorry Utah powder snobs, the Tug has you beat here.  How about 77 inches in 24 hours on Jan 11-12, 1997 (more than the US record for 24 hours, but it wasn't accepted due to some irregularities in the measurement, but we can be reasonably confident that a boatload of snow fell).   Snowfall rates of more than 5 inches an hour occur in lake-effect storms on the Tug (we observed two periods with 4-5 inch an hour snowfall rates just during our brief stay), so when it comes to intensity, my view is that the Tug beats the Wasatch hands down.  Even hardened Utah powder snobs in our group, including a long-time Alta ski patroller, were blown away by the intensity of snow.

Utah is known for the Greatest Snow on Earth.  Many people believe this is because our snow is unusually dry, but really the water content of Utah snow is pretty similar to that of the Tug Hill below.  The map below shows the average snow-to-liquid ratio of snow in the United States, which basically tells you how much snow you get out of an inch of water.  A 15 means you get 15 inches of snow for every inch of water.  Higher values thus indicate drier, fluffier snow.  The average for Utah is somewhere around 14 or 15 to one.  Similar values are found in the lake-effect snowbelts of the east, including the Tug Hill Plateau.
Summary

So, in this cage match we have a draw.  The central Wasatch win for average annual snowfall, the Tug wins for storm intensity, and we have a tie for average snow water content.  The Tug gets more lake effect, but the Wasatch have stronger contrasts in annual snowfall.  Bottom line is that residents of both regions have good reasons to take pride in their snow.  Now go and collect some good observations so that we have better climatologies in the future!
By Jim S Posted at 12/19/2013 07:25:00 AM