As some of you know, my favorite days to resort ski are not bluebird powder days but storm days during which it starts snowing high-density, heavily rimed snow in the late morning.  Yesterday was such a day as heavily rimed, high density snow began to pick up in intensity around mid morning.  From 9 am to 4 pm, the Alta Collins stake recorded four inches of snow with a water content of about 9%.  That's perfect for smooth, creamy turns and also good for base, so we were happy to accept it.

Contrary to conventional wisdom, water does not necessarily freeze when the temperature is at or below 32ºF/0ºF.  Typically to convert from liquid to ice, it needs something to help it arrange it's molecules in the proper configuration to form ice.  That something is known as an ice nucleus.  Water that is below freezing but still in a liquid state is supercooled.  Wintertime storm clouds in Utah and many other regions are typically comprised of a mixture of ice particles, snowflakes, and supercooled cloud droplets.  Under some situations, you get a lot of supercooled cloud droplets in the clouds and you get a lot of rime.  Rime forms when these supercooled cloud droplets freeze on contact with trees and other objects.

Ice crystals and snowflakes also experience riming in clouds.  Sometimes this riming is light, but yesterday it was fairly heavy.  The three large ice crystals in the photo below could have fallen to the ground as beautiful six-armed snowflakes, but instead they were rimed, leaving a high-density hexagonal structure with a consistency similar to styrofoam. 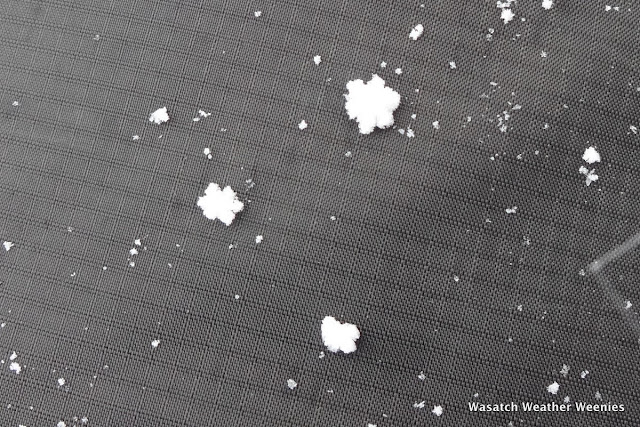 We saw lots of hexagonal ice crystals like that yesterday, as well as an assortment of lump, cone, and ball shaped crystals.  Some of these were almost large enough to be called graupel, but I thought they were best classified as heavily rimed crystals. 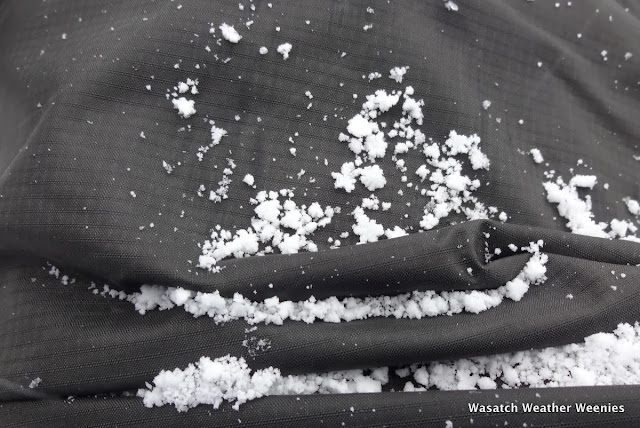 When you get heavily rimed crystals like this and it is cold enough that they don't stick together, they make for great skiing.  They have a lot of body and only a few inches smooths out the hill nicely.  Don't reveal your ear-to-ear grin, however, to those people on the chairlift complaining about how heavy the snow is or that it hurts their face.  Simply remind them that it would probably be best if they head down the canyon early.  Once they are gone, the skiing will only get better until they close the lifts at 4:30.
By Jim S Posted at 12/23/2013 07:41:00 AM