We have a couple of weak storm systems passing through northern Utah today that will bring some light snow to the mountains where it is sorely needed and ensuring a white Christmas for the Salt Lake Valley.  Drive and ski carefully.  There are plenty of slick spots on the road and booby traps in the mountains.  I haven't ventured into the Wasatch backcountry since returning from New York, but the list of backcountry avalanches is really long, with numerous close calls, including by people sporting air bags.  Let's be careful out there.

Over the past couple of days I've been having the first good look at some of the data we collected on the Tug Hill Plateau and thought I would do a comparison of the weather and snowpack evolution there over the past two weeks with that at Alta Ski Area in Utah.  To do this, I'm going to use data from ultrasonic snow depth sensors at the two sites.  These are extremely useful instruments and they tell us a lot about how much it has snowed and how the snowpack is evolving.

We begin with our North Redfield site on the Tug Hill Plateau.  Late in the day on December 7th there was no snow on the ground due to a thaw event the previous day.  A weak storm on the 8th boosted the snow depth to about 4 inches.  Then came the big lake-effect cycle with four major events, the first on the 10th and 11th, the second on the 13th, the third on the 15th, and the fourth on the 18th.

There are two things to note about this graph.  The first is the remarkably rapid increase in snow depth during each storm.  This reflects the intensity of these lake-effect storms during which we observed snowfall rates of as high as 4+ inches per hour.

The second is the decrease in snow depth following each storm.  This is not a consequence of melting, but of something known as settlement.  Snow flakes and ice crystals are remarkably dynamic.  From the moment they land, they begin to change.  This change is often called metamorphism.  Fluffy, low-density dendritic snowflakes lose their angular, tree-shaped branches and become rounder.  This leads to a settling of the snow.  The settlement after each storm at North Redfield was quite dramatic and a consequence of the fact that the storms were comprised largely of dendrites and dendritic aggregates (flakes made up of multiple dendrites that have stuck together) that have lots of angular branches.  These types of flakes tend to settle the most as they transform into more rounded shapes on the ground.

Of course, there is a limit to how much the snowpack can settle.  At some point, the crystals are rounded and densely packed and settlement occurs much more slowly.  This can be seen in the snow depth evolution at Alta Ski Area in Utah during the same period.  Most of the snow on the ground at Alta fell before this time period and had already undergone settlement and densification.  In addition, there were only a couple of weak storms, one on the 7th, the other on the 19th.  As a result, the snow depth was pretty steady during the period, with only a very gradual decrease of perhaps 7 inches.

There is one thing that I've glossed over here and that is that the evolution of the snow crystals can vary with depth, especially in shallow snowpacks.  For instance, although after a storm the new snow may be settling and densifying overall, very near the ground where the ground is warm one can actually see more angular faceted crystals (sometimes called depth hoar) forming or persisting in the old snow.  One sometimes also sees angular faceted crystals form at the surface (sometimes called surface hoar). 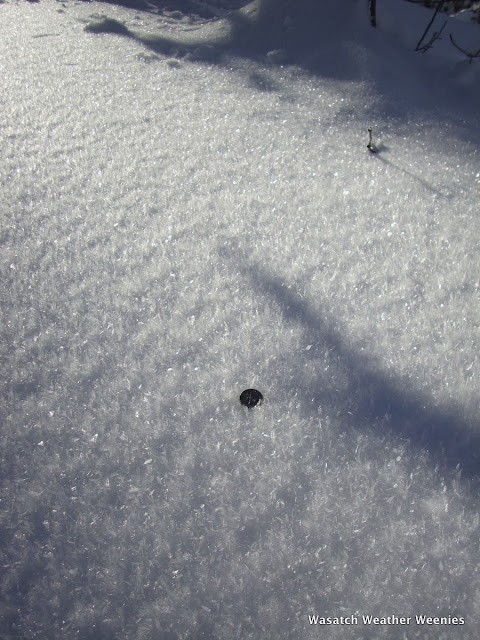 Both depth and surface hoar can be very problematic for snow stability and avalanche risk as faceted crystals tend to be quite weak and lack cohesion (in the case of surface hoar problems arise when snow falls on it during a storm).  In addition, snowpack weaknesses associated with depth and surface hoar often persist long after the new snow has settled and strengthened.   As a result, backcountry travelers in avalanche terrain need to be cautious about what is lurking in the basement, and this is going to be especially important in the coming days in the Wasatch as buried instabilities persist.
By Jim S Posted at 12/21/2013 10:17:00 AM