The Good, the Bad, and the Ugly

The good this morning is that we are hoping for a period of lake-effect to develop downstream of Lake Ontario later today and this evening, so we are back at it in upstate New York.  We are hoping to sample some of the enhancement of snowfall over the Tug Hill Plateau and also what is expected to be a stronger and deeper lake-effect band further to the south in the evening and hours prior to midnight.

The bad is the air quality situation here in Salt Lake City where I arrived last night.  I have to say that it has been really nice breathing clean air the past 11 days in upstate NY and what a bummer it is to come back to a polluted environment.  For those of you not familiar with Salt Lake's "inversion" here's a quick primer.  During the winter, cold air frequently gets trapped in the mountain valleys of the western United States, including the Salt Lake Valley.  This cold air is very stable and doesn't mix well with the atmosphere above.  As a result, in areas where there are a lot of emissions from human activity, the pollution get get bad.  Northern Utah in particular has had some terrible air quality events the past couple of years.

Here's the latest from the Utah Division of Air Quality showing the rapid increase in particulate matter concentrations to levels above EPA Clean Air act standards just after midnight on the 12th [the standard is a 24-hour average (blue circles) concentration of 35 ug/m3].  Things have only gotten worse and late last night we peaked at 60 ug/m3.  Such concentrations are considered unhealthy.

The ugly is the view from my house this morning showing all the gunk in the valley.  As is often the case during these inversions, the air is better when you go higher, so the mountains are in the clear.  Skiers breath deeply.  Unfortunately, the pollution is, however, where most of the people live. 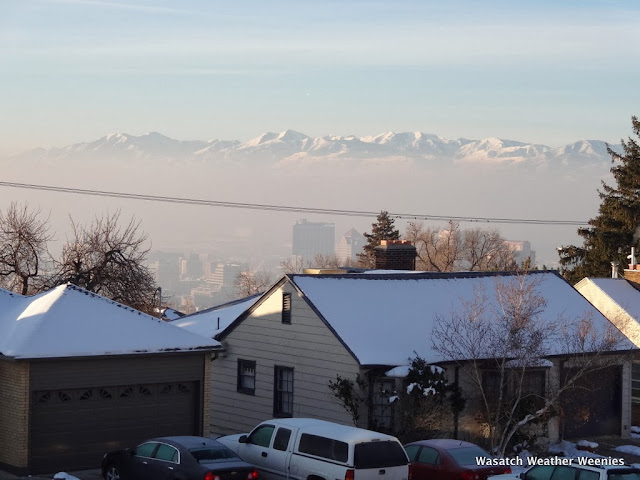