Last night was an unbelievable experience as Mother Nature put us on an incredible roller coaster of highs and lows that concluded with the most intense lake band that we have sampled thus far during the  Ontario Winter Lake-effect Systems (OWLeS) field campaign.  Just when you think it can't get any better, it does.

Forecasts were for a strong band to form near the southern shore of Lake Ontario and extend into the region just north of Syracuse, NY.  I was just hoping that we would get a little enhancement of snowfall over the Tug.  Indeed, just as we were getting into place to sample the storm, we had a beautiful area of enhanced precipitation over the Tug Hill Plateau, a pronounced rain shadow over the Black River Valley to the east, and evidence of a lake band beginning to form to the southeast over Lake Ontario.  Things were looking good. 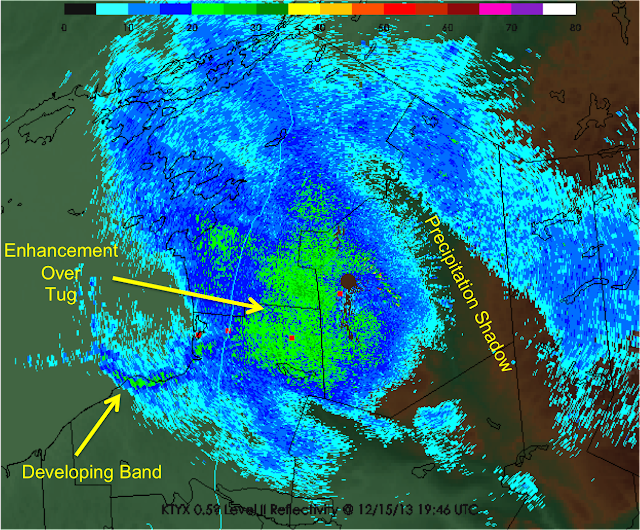 After a few hours, the University of Wyoming King Air research aircraft was in the air, but the enhanced precipitation over the Tug was falling apart (the planes track and location at the time of the radar image in red below).  There was a band over Lake Ontario, but it was pretty weak.  I was getting disappointed and had even commented to colleagues on the ground and on the plane that we needed more intensity and that perhaps they should give up on flying the aircraft over the Tug.

Then the storm just exploded.  The band intensified, but it also shifted northward and setup on an axis that extended nearly due east from Lake Ontario onto the Tug.  Fortuitously, this location and orientation put it right over the line of sensors we have running from the Lake Ontario shore up the western face of the Tug Hill Plateau.  Further, I'm fortunate to work with people who are far smarter than me and the team on the Wyoming King Air was able to adjust their plans and execute a flight track that collected what is probably an unprecdented dataset, including a leg that went right down the intense southern axis of the band after it had shifted northward.  These guys are good!

And then it got better.  The band collapsed further in scale, intensified, and locked in.  I called it the "Finger of God" band in the heat of the moment (sorry Twister lovers and haters).

Throughout this period our ground instruments were operating with the Doppler on Wheels radars scanning the band initiation and some really interesting convective storm structures over eastern Lake Ontario, our ground based instrument transect beneath the band, and weather balloons going up both around and along the band.

Snowfall within the band was intense.  At our site in North Redfield on the western slope of the Tug we recorded 36.5 cm of snow (14.3 inches) from 7 PM - 1 AM.  Within that time window, there was a 40 min window that produced 3.25 inches (unofficial measurement on a stool, but hey, even meteorologists can improvise).  I think it snowed equally hard in the lowlands to our west and may have snowed even hard on some other portions of the Tug.

The Utah team also finally met its match.  We typically travel down to our lowland site for a manual snow observation at 1 am, but elected not to do it for safety reasons.  There was at least 10 inches of snow on the road and travel down a road in the heart of that snowband under such conditions was simply not wise.  Kudos to my level-headed students for making such a wise decision.