Yesterday's weak trough did drop temperatures above the inversion and does appear to have reduced PM2.5 concentrations somewhat, but hardly to levels we would like.

Yesterday morning, the 5 AM sounding from the Salt Lake City Airport showed a very strong inversion with temperatures increasing from about –8ºC at the surface to about +4ºC at 775 mb (approximately 2250 m/7500 feet).

With the passage of the weak trough yesterday, temperatures aloft cooled quite a bit.  This morning, the 5 AM sounding showed a surface temperature of about –7ºC with temperatures increasing only to about -3ºC at 830 mb.
Although the cooling aloft weakened the inversion, it didn't break it.  It has merely helped ventilate the valley a bit and both hourly and 24-hour average PM2.5 levels are lower today than yesterday.  That's good news, but only in a relative sense.  We are still fluctuating around levels that are considered unhealthy for sensitive groups.

In addition, at least visually, things look a bit worse today than the day before the weak trough passage. 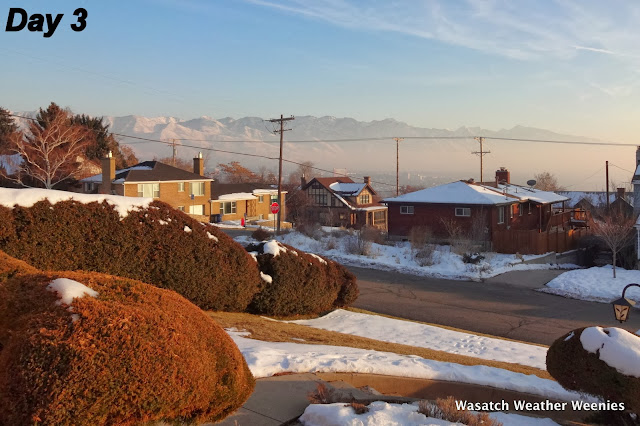 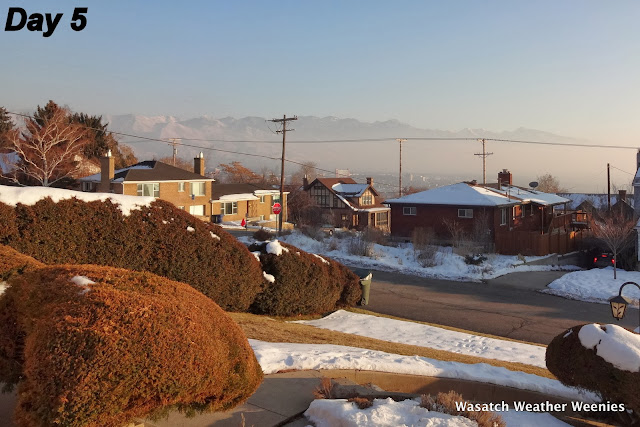 I've been looking at the forecasts and their is no Christmas miracle between now and at least January 2nd (there may be hope for at least a temporary reprieve farther out, but it's too soon to say with any confidence).  We are, however, a bit downstream of the ridge axis with some weak systems passing just to our north and northeast.  If we are fortunate, these systems will stir things up a bit and keep the inversion from getting really ugly.  If we are unfortunate, it is going to get worse, much worse.
By Jim S Posted at 12/29/2013 05:02:00 PM