Automated forecasts produced by numerical weather prediction models and statistical algorithms have come a long ways over the last few decades.  Nevertheless, they sometimes go awry and produce a forecast that is perhaps best described as "a turkey."

A case in point is yesterday's automated visibility forecast for Logan, Utah this morning.  The automated forecast in question is known as GFS MOS, with GFS standing for the Global Forecast System, a global numerical weather prediction model run by the National Centers for Environmental Prediction, and MOS standing for Model Output Statistics.  MOS is essentially a technique to improve forecast produced by the GFS (and other models) based on their performance in the past.

One of the products that MOS forecasts is visibility.  The GFSMOS forecast from yesterday called for the visibility in Logan to remain above 6 miles last night and morning.  What happened?  Fog formed and the visibility dropped to as low as 1/4 mile. 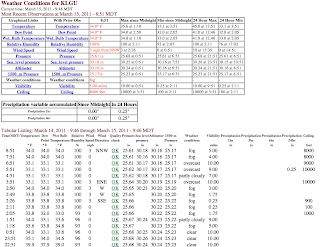 This is a good example of why as a forecaster you can't rely on automated systems too much.  Forecasters are not perfect, but human cognition and intuition bring value to the forecast process, especially when the models go awry or the atmosphere is in outlier mode.
By Jim S Posted at 3/15/2011 09:50:00 AM