It has been a fantastic snow season in Utah this year, but also in the Sierra, which are going to get the goods yet again today.

The snow depth at the Sesame Snow Study Plot at Mammoth Mountain presently sits at about 180" and has increased over 40 inches in the past 3-4 days.  This site is located at about 9000 feet, not far from the main lodge at Mammoth.  Snow depths on the upper mountain are certainly higher. 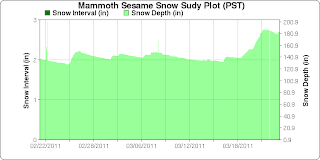 As far as Sierra ski areas go, Mammoth is a very interesting meteorologically for a number of reasons.  First, it has altitude on its side, with a summit elevation of over 11,000 feet.  Second, although it is thought of as an eastern Sierra resort, it actually sits on the Sierra Crest in an area where the height of the High Sierra is relatively low and there is a dearth of high topography upstream, especially to the southwest where the San Joaquin River lies.

What this means is that airmasses traversing the Sierra Nevada undergo less loss of water vapor (to precipitation) as they approach Mammoth Mountain, enabling Mammoth to be an exceptionally snowy location.

In addition, the isotopic composition of the snow that falls at Mammoth is somewhat unique.  A small fraction of water molecules that fall from the sky during a snowstorm (or rain storm) are built with a hydrogen isotope known as deuterium that includes a neutron (regular hydrogen does not include a neutron).  Because of this extra neutron, these deuterium-based water vapor molecules are a bit heavier than your standard water vapor molecule, and condense more easily into water or ice.  Thus, airmasses traversing the Sierra typically become depleted of deuterium because it preferentially rains out on the windward slopes.

Mammoth is unique because there is less upstream precipitation and depletion of deuterium.  As a result, there is an unusually large amount of deuterium in the snow around Mammoth.  This was discovered 40 years ago by Friedman and Smith (1970) in a classic paper published in Science.  There is a maximum in the ratio of deuterium to regular hydrogen (D/H) in Sierra snow observed just south of Mono Lake in the Mammoth Mountain area.  This maximum can be seen in the plot below, which includes contours of the departure (in per mil) of the ratio of observed deuterium to regular hydrogen (D/H) compared to that of standard ocean water.  A -100 indicates that the sample has 10% less deuterium than standard ocean water, and more negative numbers indicate less deuterium.

Deuterium is a stable, naturally occurring isotope (i.e., it is not radioactive), so you Mammoth skiers have nothing to fear.  Further, deuterium has no measurable impact on how "heavy" the snow is, so you can't blame Sierra cement on it.  Stable isotopes like deuterium can, however, be used by clever geochemists, meteorologists, and hydrologists to understand the movement of water through the hydrologic system and even long-term climate change.
By Jim S Posted at 3/23/2011 09:33:00 AM