A Tale of Two Cities

It was a delightful day yesterday in Salt Lake City, with high temperatures ranging from the low to mid 50's, abundant sunshine, and spectacular mountain views.

The shallow cold pool has limited mixing over the Cache Valley, with a layer of smog evident in afternoon weather camera images. 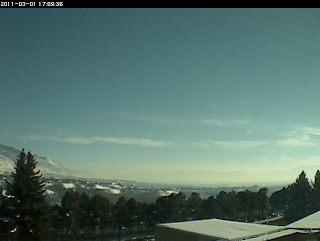 Finally, it's worth comparing the meteograms from KLGU and KSLC.  At KLGU, temperatures dropped to below zero Sunday Night and near zero Monday night.  Freezing fog and snow were observed both nights.  Note how mean daily temperatures declined steadily until Monday, when there was some rebound.  Nevertheless, with highs in the mid 30's, inversion conditions persist. 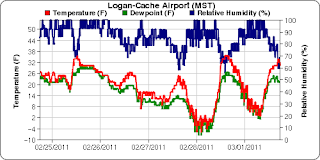 In contrast, Spring has sprung at KSLC.  Note the warming trend over the past 3 days, peaking with today's high in the low 50s. 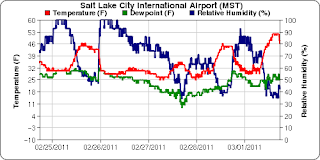