There are important changes that occur in the precipitation climate of northern Utah during the spring, with implications for skiers, flora, and fauna.

It is often said that April is the wettest month in northern Utah, but this observation depends on elevation.  At the Salt Lake International Airport, April is indeed the wettest month of the year, with March and May following in a close second and third, respectively. 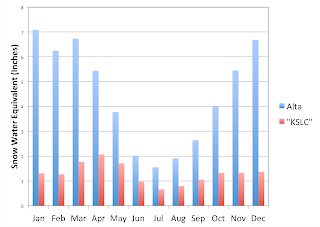 Note also that the contrast between mountain and lowland precipitation is largest in the winter, decreases during the spring, and reaches a minimum in the summer.  In winter, it's not unusual for the mountains to get hammered with snow when there's little happening down in the valleys, but that occurs less frequently in the spring.

To my knowledge, this aspect of the Utah climatology has not been carefully described or explained, although it is likely related to the increased importance of deep convection, including thunderstorms, during the spring and summer.

Today, we have a spring storm approaching northern Utah with considerable shower activity over western Utah and Nevada this morning.

Thus, showers and possibly a thunderstorm are on tap for today, providing a nice example of the spring climatology of northern Utah.
By Jim S Posted at 3/14/2011 08:48:00 AM