A "breezy" day today in the Wasatch.  This wasn't an outlier wind event, but there were pretty decent gusts at times throughout the range including 77 mph at Park City-Jupiter Bowl, 76 at Snowbasin-Strawbery, 75 at Deer Valley-Empire Peak, and 66 at Mount Baldy.  It appears most of the ski areas had gusts near their summits of 60 mph or better.  This made for some interesting ground blizzard skiing.

Conditions were generally crappy (that's a scientific term), but with some poking around, you could find some smooth creamy turns in steep wind-loaded terrain.  Some nice snow streamers were observed over the higher peaks, including the Broads Fork Twin below.  In this photo, there is also a banner cloud forming downstream.

Thanks to the winds, crowds were light at Alta, especially on the Sugarloaf Chair.  You don't see this many empty chairs very often at mid morning on a weekend during high season. 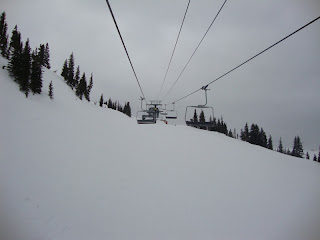 We've had two dust events this week and dust is finally evident in the snowpack.  The dust events occurred on Wednesday with the frontal passage and yesterday and today with the southerly flow.  It appeared to me that the more substantive dust loading of the snowpack occurred on Wednesday at Alta as the dust was most evident where the new snow from Wednesday night had been skied off.  Hand pits confirmed that the dust was concentrated near the bottom of the new snow layer.

The event on Wednesday was quite brief, but accompanied with precipitation.  Perhaps what scientists call "wet deposition" is more efficient at scrubbing dust mass out of the atmosphere than "dry deposition" which would have been the primary process for dust to accumulate on the snowpack yesterday and earlier today.  Any thoughts from the dust/aerosol types out there?

Despite the strong winds, emissions from major sources in southern Utah appear to have been fairly limited yesterday and today.  Thus, the dust concentrations were fairly low.  I suspect the land surface is just not ready to go yet this year.  Perhaps in a couple of weeks, although I'd prefer to keep the spring as dust free as possible.
By Jim S Posted at 3/19/2011 05:20:00 PM