Our front delivered last night, but somewhat less snow than I expected.  The Alta-Collins site peaked out at 9" when the snow petered out at about midnight, with a whopping 1.09" of snow water equivalent.  Assuming all that snow water equivalent fell as snow, that's an density of 12%, close to the average found in the Cascades. 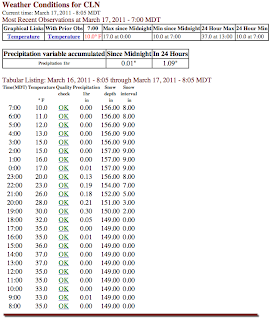 The overnight snowfall, as suggested by the computer models, simply didn't materialize.  The NAM model forecast from yesterday morning, for example, kept the precipitation going through early this morning.

Instead, the storm ended at Alta-Collins at about midnight.  As a result, the snowfall was less than expected, and the coating of lower density fluff for faceshots failed to materialize.

Although the computer forecast models have improved dramatically, predicting what happens following the passage of the frontal snowband remains a bit of a crap shoot, as shown last night.  At issue is the best approach to take to improve computer forecasts of these events.  Do we simply need higher resolution models with better representation of physical processes, or is there simply low predictability in the post-frontal environment that is better addressed with a lower resolution ensemble?  These are good questions for graduate students.
By Jim S Posted at 3/17/2011 08:25:00 AM