There is remarkable weather not only coast-to-coast in the United States, but also south of the border.

Cold air associated with the latest Arctic surge is moving equatorward along the east side of the Sierra Madre and other ranges of Mexico and Central America.  The 30-hour forecast from the 0600 UTC initialized GFS, valid 1200 UTC 3 Feb, shows a nose of high pressure pushing equatorward over eastern Mexico and the western Gulf of Mexico, with the leading edge of cold air at 925 mb approaching the Yucatán Peninsula. 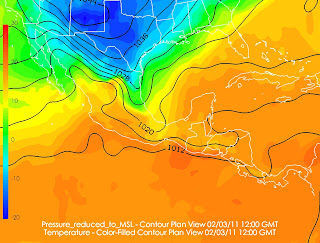 The nose of high pressure reflects the more rapid equatorward advection of cold air due to along-barrier ageostrophic windward of the Sierra Madre.

These events not only bring cooler air to the tropics, but also strong winds through major gaps in the mountain ranges of Mexico and Central America.  In particular, the strong pressure gradient drives gap winds through Chivela Pass in southern Mexico.  These gap winds emerge over the Gulf of Tehuantepec and can be seen near the center of theimage below as the western-most (and strongest) wind speed maximum over the eastern tropical Pacific Ocean. 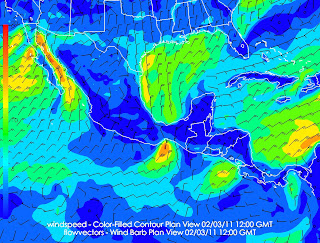 The gap outflow is significant for two reasons, one dynamical and the other societal.  The first is that they provide perhaps the cleanest example of atmospheric inertial flow anywhere in the world.  Note how the core of the outflow jet turns to the right.  This anticyclonic turn is consistent with flow deflection by the Coriolis force and traces an inertial path, as shown by Steenburgh et al. (1998).   The second is that the strong outflow causes upwelling in the Gulf of Tehuantepec, which brings nutrient-rich water to near the ocean surface, enabling the thriving fishing industry.

Central American Cold Air Surges can also produce gap outflow near Lake Nicaragua and the Isthmus of Panama.  What is interesting about the present event is that strong easterly flow is producing such outflow ahead of the cold surge.