Records May Fall, But Not in Vernal

At issue is the low-level cold pool, which is a bit deeper and stronger than observed yesterday morning.  I'm a bit perplexed as to why it is so strong and deep given the well-mixed conditions that were present yesterday afternoon.  It could put the brakes on the temperature rise today, but given the strong southerly flow, I believe we'll take a run at 60F today at KSLC.

Meanwhile, further to the east, the Uinta Basin remains mired in a miserable inversion.  Single digit minimum temperatures prevailed over the basin this morning from Duschesne to Vernal.  BRRRRR. 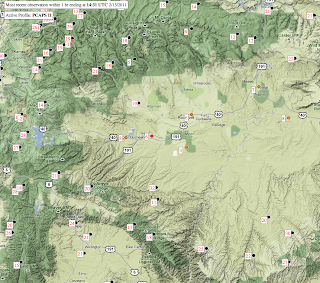 A 7-day meteogram from Vernal shows a gradual warming trend, but also that temperatures have not cracked 25F while we've been walking around in spring jackets along the Wasatch Front. 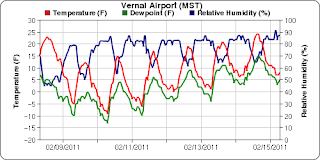 The dynamics and evolution of these Uinta Basin cold pools has not been carefully investigated.  They appear to be far stingier than those along the Wasatch Front, and far less vulnerable to scouring during large-scale southwesterly flow.  Is this because Uinta Basin cold pools are stronger and deeper given the more direct penetration of arctic air into the region, or because the basin is more protected from southwesterly flow by the nearly continuous topographic barrier to the south and west?
By Jim S Posted at 2/15/2011 08:19:00 AM