There are many ways to define winter.  There is astronomical winter, which runs from the winter solstice to the spring equinox.  There is meteorological winter, which is typically defined to run from the beginning of December to the end of February, and then there is Steenburgh winter, which covers the prime powder skiing season in the Wasatch when there is a deep snowpack and a low-angle sun so that the powder lingers for extended periods in the backcountry.

The start of Steenburgh winter does not depend on the calendar.  It starts the first day the Collins observing site at Alta hits a 100" snow depth.  Why?  Because that is when there is sufficient snow depth that most of the Wasatch is skiable without dealing with rocks and bony conditions.  Think I'm nuts?  I ran into someone last year who mentioned, without provocation, that the Maybird Apron is not skiable until there is 100" of snow at the Collins site.  That is my experience for many lines in the high alpine areas of the Wasatch.

This ski season, Steenburgh winter got an early start.  The Collins snow depth hit 100" on December 20th.  Not too shabby! 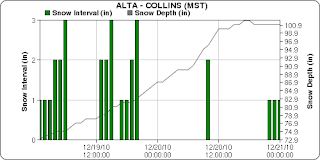 Steenburgh winter ends on Feb 10 because powder skiing is also influenced by the sun.  A wise man (Bob Rice) once taught me that the sun "turns on" in the Wasatch on Feb 10th, and this is the date that marks the "beginning of the end" of the ski season.  Granted, Feb 10 is a bit arbitrary, but it is around this date that the sun angle becomes high enough that southerly aspects bake very quickly with just a little direct sun.  Further, after February 10th, as the sun angle and day length increase, aspects that receive insufficient solar energy not to become sun-crusted become increasingly concentrated on the northern compass point and on the period during which powder persists after a storm becomes shorter.

This is not to say you can't get great backcountry powder skiing after February 10.  In fact, some of the best skiing is in the later half of the season, and my best day last year was April 30.  But, as you move later in the ski season, the sun gets higher, the day gets longer, and earning good powder turns often requires a race against the clock and a more limited range of aspects.
By Jim S Posted at 2/10/2011 08:25:00 AM