Can We Go Sub-Zero? 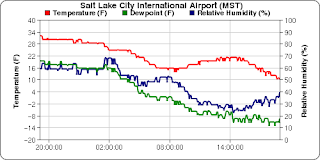 With clear skies and a low dewpoint (-8F), it appears the only things that can keep us from getting into the negative numbers at KSLC tonight are the wind and the lack of snow cover.  The flow over most of the valley and along the east bench has weakened somewhat, but some strong winds remain, including a gust of 41 mph at the University of Utah.

Can we keep the turbulence at bay long enough to drop below 0F?  Even intermittent turbulence can trash a perfectly good nocturnal inversion and, with limited snowcover, the atmosphere will be interacting with the ground, which won't cool as much as snow because of the gradual flux of heat from the substrate toward the ground surface (bummer!).

Forget about science.  Like a golfer in a major, I'm rooting for the negative numbers tonight.  It will be the waste of a good arctic airmass if we remain in positive territory.  Quite frankly, the opportunities to see negative numbers are already rare, and will only decline in the future.  LET IT FREEZE.
By Jim S Posted at 2/01/2011 07:28:00 PM