Something Out of Nothing for Rush Hour?

Today provides a great example of the challenges of forecasting in the Intermountain West.  At issue is will we get "something from nothing" that will make the rush-hour commute difficult.

Let's start with how things look right now.  The 1200 UTC NAM (North American Mesoscale model) analysis shows large-scale northwesterly flow from 700 mb through jet-stream level with a weak 500-mb short-wave ridge over Utah and similarly weak short-wave trough over the Pacific Northwest.  At 700 mb, there is a tongue of warm air extending into central Idaho, with warm advection over northern Utah and a developing cold-frontal zone over Oregon.

The radar shows very few echoes anywhere upstream of Utah at 1400 UTC.  This is the "nothing." 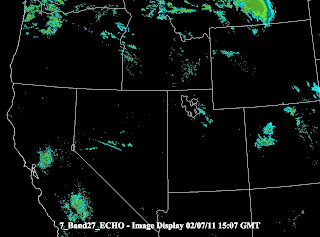 Looking at MesoWest, it's also difficult to find any sort of bonafide surface feature, although there is a hint of a cyclonic wind shift in the extreme northwest corner of Utah, which is also present in the NAM analysis above. 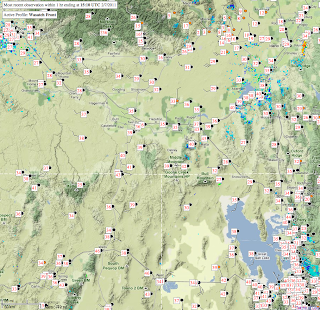 The NAM forecast, however, calls for a decent surface front to develop as the upper-level short-wave trough and cold-frontal baroclinic zone move into northern Utah.  It predicts the surface front to move through the Salt Lake Valley at about 0000 UTC (1700 MST) this afternoon, with a brief burst of snow accompanying and following the frontal passage.

This is a tricky forecast for a meteorologist, because you can't see the whites of the storm's eyes.  This is a "something from nothing" storm, and it is only because of the development of numerical weather prediction models and their ability to simulate non-linear atmospheric processes that we know that we might be dealing with snow for rush hour.  On the other hand, numerical model forecasts are not perfect and chaos sometimes limits predictability, so in this instance, it is best to prepare, but be aware.  Keep an eye on the radar and the forecast today.
By Jim S Posted at 2/07/2011 08:46:00 AM