The Utah Avalanche Center reports this morning that the snow that fell overnight in the Wasatch was much denser (about a 10% water content) compared to what fell yesterday (about a 5% water content).  As a result, the new snow is inverted, and, as most backcountry powder snobs know, that makes for more difficult skiing and trail breaking.  But we are so spoiled!  Skiers elsewhere are going to have little sympathy for us.

At issue is why did the water content of the snow increase overnight?  Looking at the hourly data from Alta-Collins suggests that the density of the freshly fallen snow increased after about 0700 (12 AM MST) when precipitation rates increased dramatically with >0.1" of SWE falling each hour through 1100 UTC (4 AM MST).  During this period, the snow interval increased 7 inches, with .67" of snow-water equivalent, which is a water content of about 10% compared with the 4% that was falling yesterday. 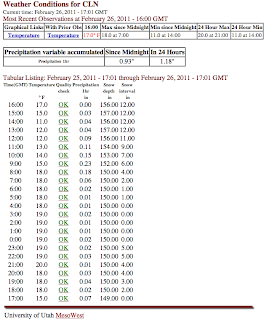 Yesterdays snow was produced by a very shallow orographic cloud.  Snowflake images from Alta show aggregates of nice dendritic (tree or fern like) snowflakes with plenty of pores that are full of air rather than water.  In other words, low density snow.

Something about the storm dynamics must have changed to create higher density snow crystals.  There are a few possibilities.  First, since the temperatures changed little between yesterday and last night, it's possible that the storm deepened so that more crystal growth occurred at higher altitudes where temperatures were colder than that favorable for dendritic growth (about -12 to -18C).  Second, winds and turbulence increased, leading to densification as the dendritic arms were broken off either in flight or on the ground (although the latter would not play a role in a rain gauge).  Third, the snowflakes became more rimed.  Typically, this would require a major change in either the storm dynamics (e.g., strength of the vertical motion) or the microphysics (changes in the cloud liquid water content, the concentration and size of cloud droplets, or the number of ice nuclei in the cloud).  Finally, there is the possibility that there are some problems with the Alta-Collins precip gauge and the snow water contents haven't changed all that much, but I suspect the reports from the UAC are also based on manual observations.

The radar reflectivities broadened and intensified overnight, so the storm dynamics did change from the localized orographic storm that was present yesterday.

On the other hand, it is impossible to say from this data alone that this resulted in a major change in the snow growth processes.  We also know that the winds were quite strong, so this could also have played a role.

What is needed are good observations of snow crystals.  Perhaps Alta will post up some images of the crystals last night or some of our readers can provide their perspectives from the field.  Help us understand this mystery!
By Jim S Posted at 2/26/2011 10:40:00 AM