Some interesting observations related to our ongoing Canyon Wind event.  I'm not a fan of that name, and today's event illustrates why.  Basically, we have a downslope windstorm occurring, not gap flow, so there are strong winds not only in the canyon mouths, but along most of Wasatch Front.
The strongest winds have been in the Centerville/Farmington area where, at 1925 UTC, three stations were reporting gusts at or above 50 mph.  The Centerville UDOT site has had sustained winds of 30-35 mph with gusts to about 50 mph for about three hours. 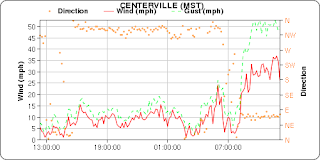 The strongest gust I've been able to find, 60 mph, was reported by the nearby CENWWS MesoWest site. 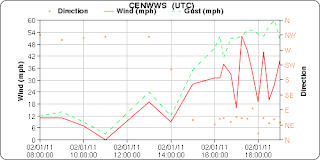 To the south, peak gusts along the east bench of the Salt Lake Valley are around 30 mph.  It should be noted, however, that strong northerly flow is observed over the central and western valley.  One should avoid downslope myopia!  The Sandy Eddy is also quite apparent.  Note the cyclonic gyre centered just west of the mouth of Little Cottonwood Canyon. 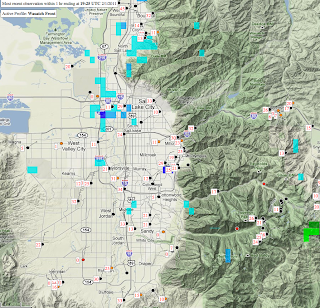