It is remarkable how different the weather can be between the east bench and the Salt Lake International Airport (KSLC) during some inversion events. 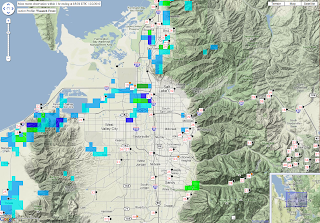 Further, I could spy a thin layer of fog around the airport while running in the avenues foothills this morning.  Fog was first reported at the airport at 0335 UTC and persists thusfar this morning.  The minimum visibility reported was only 1.5 miles (at 1000-1030 UTC), but it is up to 5 miles now.

Soundings from 1200 UTC yesterday and today pretty much tell the tale.  Yesterday (and the previous night) we had abundant mid-level clouds and isothermal conditions extending from the surface almost to 700 mb.

Further, with mainly clear skies, conditions were better for radiational cooling and temperatures at KSLC fell more than the previous night.

An interesting paradox with regards to the inversion evolution is that it is colder at KSLC this morning than yesterday morning, but warmer at the University of Utah.  Knowledge of the evolution of inversion structure is critical to microscale forecasting over the valley.
By Jim S Posted at 12/02/2010 08:45:00 AM